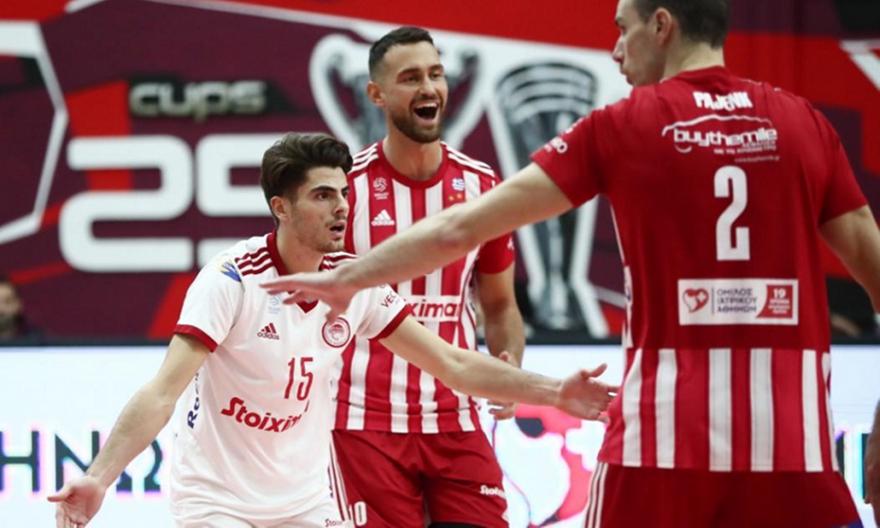 Stormy Olympiacos “pressed” PAOK and it’s Christmas at the top!

Olympiacos will spend Christmas at the top of the Volley League. Alberto Giuliani’s team prevailed 3-1 set of PAOK in its derby 9th matchday and closed his obligations for 2022 in the best way.

Excellent performances from the “red and white” in the first two sets that featured Stern and Hidalgoat the moment when Van de Dries and Yiannis Takouridis distinguished themselves from the “two-headed man of the north”.

The players of Olympiakos started strongly from the first set taking a quick 5 point lead with the block driver. The guests tried to get back on the track of contention, but both the excellent receptions of Koumendakis and the good work in the block by Pagenk and Travitsa helped Alberto Giuliani’s team to escape to +8 at the most crucial turning point of the set and eventually win it with 25-21 for 1-0.

The setting was similar for the home team in second set, as they managed to get ahead early with a difference of around 6 points. The streak continued with Hidalgo, Stern and Koumendakis taking advantage of the guests’ mistakes and finally taking the set with the imposing 25-14.

PAOK entered the third set determined to turn the tables. Tailor, Day and De Dries helped the most in blocks and receptions and the “two-headed man of the north” built a streak that brought him to +5. From that point on, the visitors “marked” Hidalgo on serve, justifying their coach’s choice, with the result that the set ended up in their favor with 25-23.

The fourth set it was a real derby with Olympiakos managing to leave early on +5 making it 5-0. However, the visitors came back and with a 2-8 run brought the match to a draw, giving new interest. The set went point-to-point with both teams exploiting each other’s mistakes until the 19-19. There his players Alberto Giulianithey found solutions to the PAOK block and managed to take the set 25-22, making it 3-1 in sets.