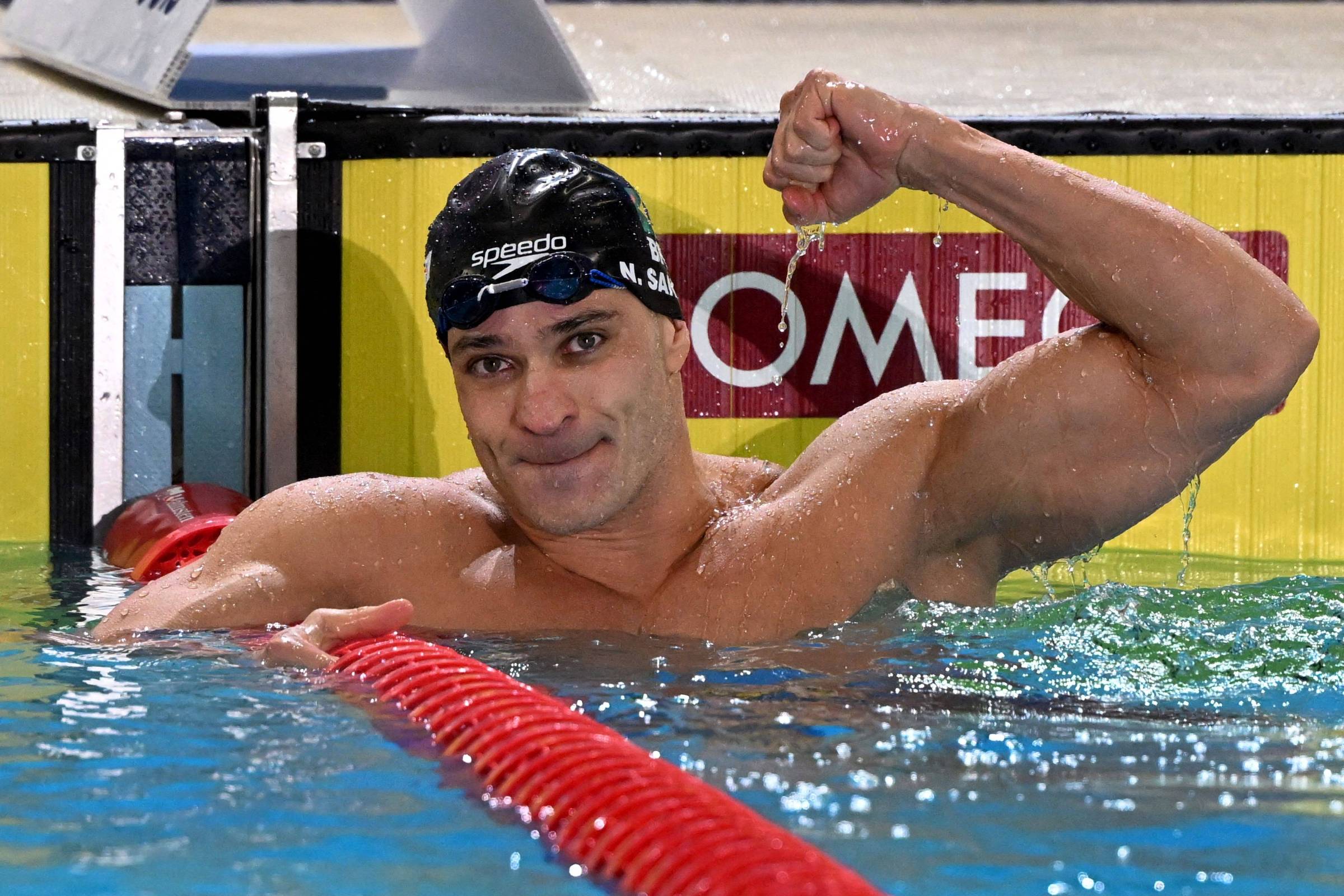 Champion at 42, Nicholas Santos tries to get used to life outside the pool

Swimmer Nicholas Santos, 42, claims to have stopped counting time for the first time in many years.

“I swam a little these days, but it was about 800m just to let go. Before, it was at the limit of exhaustion, almost injury. Today, I no longer have this need to count time”, he told the Sheet.

On the last December 14th, he needed exactly 21s78 to win the 50m butterfly event at the World Championships in a short course (25 meters), in Melbourne, Australia.

The result broke the championship record, which was his own. It was the sixth time that he updated his own record of being the oldest swimmer in the history of the sport to be on the podium of a World Cup.

Shortly after winning, in an interview given at the complex itself and broadcast around the world, he announced his retirement.

“I’m getting old and leaving it to the young,” he said in farewell.

Nicholas became a benchmark in terms of defying time, but he needed the resilience to overcome difficulties in his long career.

He was only half his current age when he participated in the first world championship of his career, in 2001, in Fukuoka, Japan.

He ended the 50m butterfly race with a modest 28th place overall, eliminated with a time of 24s8, and still an abyss away from the 23s50 mark of Australian Geoff Huegill, gold medalist at the time.

“I learned to be resilient, I think that’s my biggest mark”, says Nicholas.

“Thinking about my career, honestly, I even passed the deadline. A few years ago, retirement was already on my mind. It could be now, or next year, but I was very happy with the way it turned out.”

Two years after the debut, in Barcelona, ​​the performance was even worse: the 40th place and a time of 25s15. In 2004, in Indianapolis, he would win the first two medals in world championships.

In Melbourne, he was close to the world record, which is shared between him and the Hungarian Szebasztian Szabo, 21s75, and left behind the Swiss Noe Ponti, 21 years younger.

Individually, it was the fourth gold medal in the short course world championships, the ninth if added to another silver, in addition to three other silvers and a bronze in long courses.

It also has medals in the men’s 4x100m freestyle and 4x50m medley relays, in addition to the 4x50m mixed medley. Now there’s time to start over.

“It will be a new beginning, now, because it was a lifetime in swimming. I know I had the conditions to remain competitive to, for example, compete head-on with Caeleb Dressel (owner of eight Olympic medals and current Olympic record holder in the 50m freestyle), but I would need to be 100% on it. I didn’t want to deliver 80% or less”, he explains.

Nicholas still isn’t sure what life away from the pools will be like. Hours after winning, after a long time between awarding, anti-doping control and transportation to the hotel, he slept only three hours and went back to the pool for training before swimming the 4x50m freestyle relay alongside Pedro Spajari, Gabriel Santos and Lucas Peixoto —the country finished eighth.

After that, he also met with representatives of Fina (International Swimming Federation) and accepted the invitation to be the entity’s international ambassador.

“I received a direct invitation from the president, I found it interesting. In Brazil, for the time being, I don’t see any chances of being a coach because I don’t have the training to accompany an athlete. Maybe I can help as a team manager, but not the edge of the pool yet.”

Since 2021, he has reconciled his career in swimming pools with functions as manager of Oxygen, a training platform for high-performance athletes that has names like Léo de Deus and Guilherme Basseto, but works mainly with the training of potential young people in the modality.

“I’m going to meet with my partners to talk about it. There are projects from the Sports Incentive Law to improve the structure in which we train, to have more help for the professionals involved. Today we take it out of our own pockets to pay for them”, he says.

Despite the retirement, the regulated diet –without gluten, lactose and sugar–, in addition to moments of meditation, will continue normally.

“People have a hard time understanding what a lifestyle is, they think I do it out of sacrifice, but I like to be like that. I studied for that and that, for me, is living happily”, he explains.

The feared times and many fundamental details for the construction of new records will be out of the new routine.

To reach gold in Melbourne, he qualified 14th in the first heat without shaving a technique used to improve the body’s glide in the water. There were only 16 classified.

Then, in the semifinal, he shaved and changed his strategy and finished fourth among the eight finalists. In the final, new tactics to face the nine degrees in Australia.

“I knew it was over before I hit the edge. Retirement is a pretty clear cut situation for me.”

Nicholas won a total of 54 career medals and defied time. At 42, he can finally stop looking at the clock.