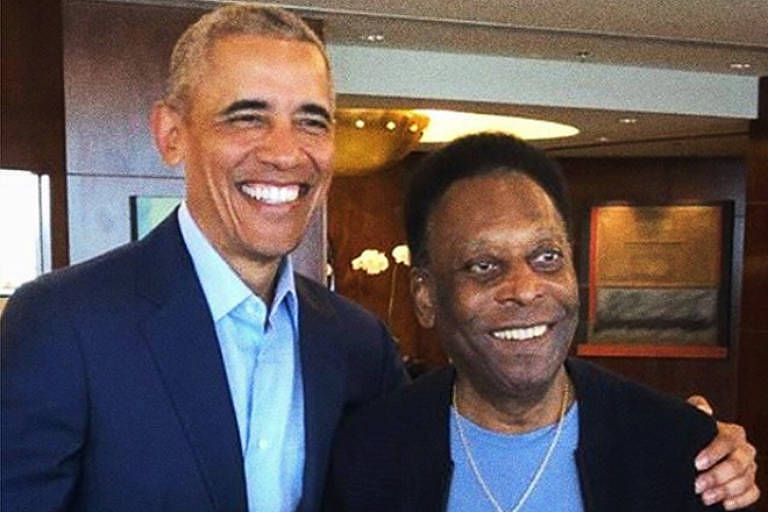 It was not enough for the main football clubs and some of the greatest players in history to pay their respects to Edson Arantes do Nascimento, Pelé, after his death this Thursday (29). His grandeur surpassed the barriers of sport and caused the world to mourn.

National and foreign politicians and artists made publications about the king of football, who died at the age of 82 due to multiple organ failure, a result of the progression of colon cancer, according to the Albert Einstein hospital in São Paulo.

The former president of the United States, Barack Obama, made a post on his Twitter saying that Pelé was one of the greatest in football.

“And, as one of the most recognized athletes in the world, he understood the power of sport to bring people together. Our thoughts are with his family and everyone who loved and admired him,” he said in the publication.

They met in 2019, in São Paulo, during a visit to Brazil. On the occasion, the star gave the ex-president an autographed shirt of the Brazilian national team. “To President Obama with a hug, Edson Pelé”, he wrote on the uniform.

Alberto Fernández, president of Argentina, also paid tribute on social media saying that one of the best players in history had left us.

“We will always remember those years when Pelé dazzled the world with his skills. A big hug to his family and to the people of Brazil, who will carry him in their hearts”, he said.

In addition to them, the leader of France, Emmanuel Macron, posted a photo in honor of Pelé. “The Game. The King. Eternity.”, he wrote on his Twitter.

Brazilian authorities such as President Luiz Inacio Lula da Silva (PT) said he had the privilege of seeing the idol on the field, and that few Brazilians carried the name of Brazil so far.

“As different from Portuguese as the language was, foreigners from the four corners of the planet soon found a way to pronounce the magic word: ‘Pelé'”, he wrote in a message published on social networks.

President Jair Bolsonaro made a post on his Instagram profile saying that he sees with regret the death of a man who took the name of Brazil to the world.

“He transformed football into art and joy. May God comfort his family and welcome him into his infinite mercy.”

Bolsonaro decreed official three-day mourning in an extra edition of the Official Gazette this Thursday. In São Paulo, Governor Rodrigo Garcia (PSDB) determined seven days of mourning. According to the state government, the decree will be published this Friday (30).

Graduate vice president Geraldo Alckmin (PSB) wished prayers to the family members. Fan of Santos, the club where Pelé made history, he also said that the former player was a complete athlete.

“My team, Santos, the ‘fish’, had the greatest attack of all time: Dorval, Mengálvio, Coutinho, Pelé and Pepe. It was a selection”, he told journalists.

In the world of cinema, the American actress Viola Davis published a video with several moments of the former player’s career, with color and black and white records.

“Rest in peace, Pele. You were the greatest football player that ever lived! Prayers to your family. Thank you for blessing us,” wrote Viola.

American actor Will Smith also posted a photo next to the idol on his Instagram profile. “The greatest to ever do this. Rest in peace, King Pele.”

In the world of football, FIFA president Gianni Infantino issued a note of regret saying that the idol was unique in many ways, such as being the only one to win three World Cups and having incomparable skill and imagination.

“More importantly, ‘The King’ ascended to the throne with a smile on his face. Football could be brutal in his day, and Pelé often received rough treatment. But although he knew how to defend himself, he was always an exemplary sportsman, with a genuine respect for opponents,” he said in a statement.

Among the players, the Argentine Lionel Messi, finalist of the World Cup in Qatar, who plays for PSG (Paris Saint Germain), also paid his tribute by publishing a sequence of photos of Pelé on his Instagram. “Rest in peace,” wrote the number 10.

Kylian MBappe, also a World Cup finalist for France and PSG player, made a publication on his Twitter saying that “the king of football has left us, but his legacy will never be forgotten”.

Cristiano Ronaldo, in turn, published a longer text, in which he says that Pelé is “a reference of yesterday, today, forever”.

“A mere ‘goodbye’ to the eternal King Pelé will never be enough to express the pain that embraces the entire world of football at this moment”, he wrote.

Among Brazilians, striker Neymar, who also plays for PSG, said in a publication that before the former player, football was “just a sport”. “Pele changed everything”.

“He transformed football into art, into entertainment. He gave voice to the poor, to black people and mainly: he gave visibility to Brazil. Football and Brazil raised their status thanks to the King! He is gone, but his magic will remain”, he said in the Publication.

Even before Pelé’s death, Santos, the club that unites the history of Neymar and Pelé, paid tribute to the king. This week, the team from the coast of São Paulo released its new shield, which carries a crown above the badge, in its honor.

After his death, a crown also replaced the coat of arms on the team’s official Instagram profile. Next to the image, only the word “eternal” was used as a caption, a symbol of the greatness of the greatest football player in history.