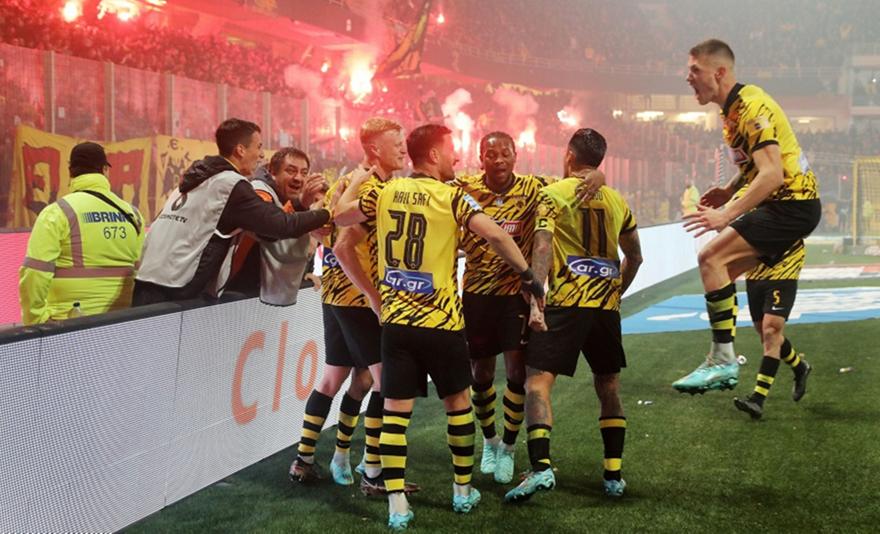 Panathinaikos’ undefeated record was broken and AEK kicked the league!

The derby was painted… yellow and black. In a fully balanced game, the AEK she found her moment in an unsuspecting spot, scored and broke his unbeaten streak Panathinaikouprevailing on me 1-0.

Somehow, the Union reduced its difference from the top and the “greens”, who suffered their first defeat of the season, to four points, while setting fire to the league as a whole after the Olympic and PAOK it’s at -7 now.

A firecracker went off near Brignoli and there was a temporary interruption, with the AEK to strike on the… restart from this phase and score with Pineda, while there was then an eight-minute stoppage due to the suffocating atmosphere from the smoke bombs.

AEK will play Panaitolikos at home the next matchday, Panathinaikos will play PAS in Ioannina.

In the coach’s mind

Matias Almeida defeated AEK with the classic 4-4-2. Athanasiadis under the posts, with Vida and Mukudi as stoppers, Sidibe on the right and Hadjisafi on the left. Simanski and Jonsson are in the center, Amrbat on the right, Pineda and Levi Garcia on the left with Araujo at the top of the attack, with the latter having a freer role.

Ivan Jovanovich lined up Panathinaikos with 4-2-3-1. Brignoli in goal, with Kochira, Senkefeld, Magnuson and Huancar in defense. Ruben and Kourbelis in the axis, with Palasius, Bernard, Verbic in the central attacking triplet and Sporar at the top of the attack.

Both teams were quite cautious at the start of the game. AEK didn’t use the… classic pressing, since they didn’t want to give space to the opponent and looked more on the counter and less in set play. This is how her first visit to the opposing team’s goal came in the 9th minute, which started with Leviai’s push on Ruben, with the AEK striker’s cross being pushed away by Kourbelis.

A tear in Hadjisafi’s hand and a four-minute stoppage in the match, at least, dropped the pace too much, with Panathinaikos threatening in the 20th minute with a combination of free kicks and Verbic shooting to the bodies. Five minutes later, the “greens” quickly went on the counter and Sporar converted, Palacios’s finish being poor.

AEK had targeted the last quarter of the first half, which was clearly seen. She took steps on the court, started to raise her pressure but not so high and her lines. Although he controlled the pace, he did not manage to find the spaces he would have liked against the well-matched Panathinaikos, nor to create the classic opportunity with the 0-0 sealing the -incomplete- efforts of the two teams in the first half.

Levi Garcia was limited by Schenkefeld, but in the second half he switched sides and fell on Magnusson, finding more space to exploit his speed and power. The first phase of the replay belonged to Panathinaikos and was the longest of the game, up to that moment. It was in the 54th minute when Bernard produced a superb individual effort and header but Athanasiadis rose to keep the scoreline.

Jovanovic replaced Cerin with Verbic and changed the formation to 4-3-3, with the match flowing without phases and at a low tempo. In the 66th minute the game was temporarily stopped, with a firecracker going off near Brignoli who fell to the ground. On the restart, the AEK players played at once after referee Nobre’s free, catching their opponents asleep, with Araujo heading a pass to Pineda, who with a diagonal finish “punched” Brignoli for 1- 0 in… Panzurlism in the “OPAP Arena”.

Ioannidis took the place of Kourbelis and Panathinaikos was now playing with a clean 4-4-2, with Almeida conservatively starting the match from the bench and paying particular attention to his movements. The game was stopped for eight minutes due to the suffocating atmosphere created by the smoke machines and we eventually went into 12 minutes of extra time. And the guests may have been “burning” for the equalizing goal, but the hosts were the ones who came forward more rationally but also had no good options.

Until we reached the 8th minute of stoppage time, when Vida for no reason or reason let the ball pass over him, with Ioannidis rolling to his opponent, jumping over Mukudi’s… furious tackle and past Athanasiadis. Nevertheless, the fact that he was in a sideways position made it difficult for him to finish in an empty net, stopping at the right post. In the “caps”, AEK went on the counter and Fernandes won a penalty from Senkefeld. Levi took over the execution at 90’+10′ but saw Brignoli stop him and keep his team “alive”, who ultimately failed to avoid their first defeat in this season’s league.

MVP: Of necessity, Orbelin Pineda. Because Szymanski may have had an excellent game in midfield, winning several duels, but it was the Mexican midfielder who scored the winning goal for AEK and… the one who broke Panathinaikos’ unbeaten streak.

The whistle: The Portuguese Nobre did not have the big mistake. He is controlled for the delays of the first part where they seem few despite several interruptions, while he tried to keep the game away from the strong markers, drawing few cards. In the goal phase, he continues it with a free kick giving the ball to AEK but it is unclear if they were in possession when he interrupted.

Facebook
Twitter
Pinterest
WhatsApp
Previous article
The journalist Panagiotis Tzenos died suddenly at the age of 47 – The “goodbye” of the Parapolitics
Next article
Tsipras: Absolute solidarity with President Lula, democracy is threatened by the extreme right