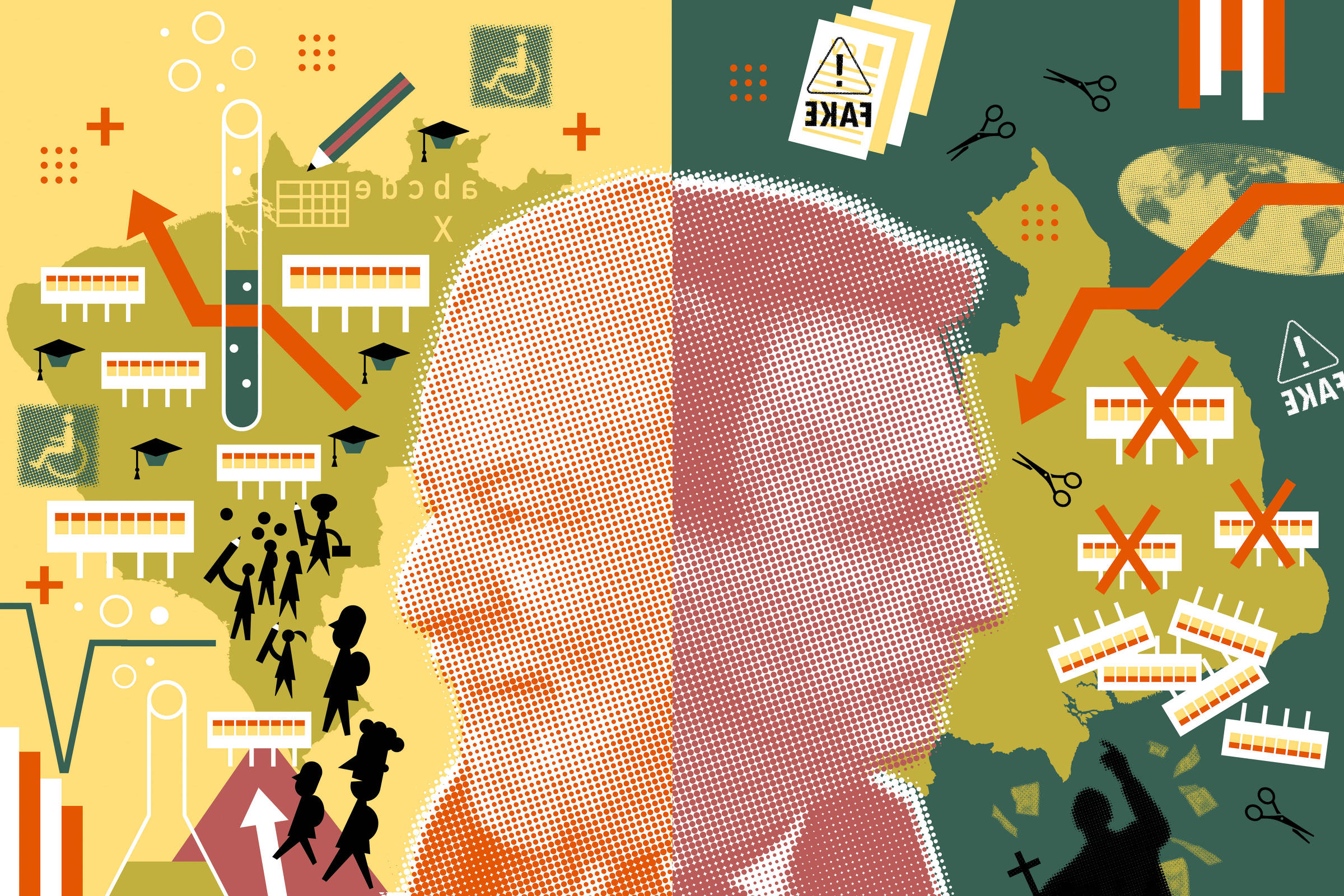 Opinion – I am Science: Civilization or Barbarism?

At this historic moment in which the future of our country will be decided at the polls next Sunday, we draw in this article a brief comparative assessment of the legacy of the governments of former President Lula and current President Jair Bolsonaro in the areas of Higher Education (ES) and of Science, Technology and Innovation (CTI). From what they did, we may have clues as to what they might do. A comparative analysis of government programs for both ES and CTI we have already presented in the blog earlier.

The development of any country, with equity, sustainability and sovereignty is closely linked to investment in Education and Science. That’s why the comparison between the policies carried out in the governments of the two candidates is enlightening (and astounding!) – and presents our possible horizons for the future. We hope that voters, going through the cloud of smoke, lies and accusations that cloud the electoral process, can look at what really matters in the decision to vote.

The first comparison that we propose concerns the strategic vision on higher education and ST&I of each management, in the articulation they promoted between the knowledge production system and the demands of society. Strategic choices represent not only structuring decisions of public policies, but also the vision of the country and the world that is behind them.

Even though Lula did not have more than elementary education, and for this very reason (because he knew the importance of education), he invested, expanded and supported the higher education and research system with expressive numbers (which we will mention later). The level of investment not only made it possible to rebuild the system that was tottering after the neoliberal decade in the 1990s. It also expanded the promotion of Brazilian research, expanded federal universities as new campuses, especially in the interior and in the metropolitan peripheries, almost doubling the number of public vacancies and supporting the expansion of vacancies in private institutions, with scholarship and funding systems, unified the system of admission to universities with ENEM-Sisu, initiated affirmative, permanence and quota policies (consolidated in Law with Dilma) and established an evaluation and quality control system for Higher Education (SINAES).

Since the first month of its mandate, the Bolsonaro government has entered into direct and open conflict with universities and scientists on several fronts. He carried out ideological attacks on public universities, the humanities and the legacy of Paulo Freire, interfered in the choice of deans, threatened the freedom of the professorship, cut funding and investment resources, cut research grants and the purchase of equipment, and made the system reach on the verge of collapse. The result was the reduction of vacancies (loss of 85 thousand enrollments in federal universities) and the “brain drain” outside the country. In science, at the most important moment of defending it and adopting scientific evidence, during the pandemic, what prevailed was denialism and fake-science. As in culture, environment and human rights, the order was scorched earth in the sector.

Let’s look at some numbers. With regard to enrollments in the federal public network, in 2003, the beginning of Lula’s 1st term, the Federal Institutions of Higher Education (IFES) registered a total of 567,101 students and at the end of the last term (2010) this number rose to 849,727, a 66% growth that would continue under Dilma administrations, until reaching 1.1 million enrollments in 2016. This expansion was mainly thanks to REUNI, a program to create new universities and new campuses for regions lacking public higher education in Brazil – which also brings new pedagogical, epistemological and research questions from these territories, populations and their cultures. Private institutions also increased the number of vacancies, from 2 to 4 million enrollments in Lula’s administration (these and other data mentioned here are available on the SoU_Ciência website and on our panels).

During the Bolsonaro government, the number of public places in the federal network shrank for the first time in decades and the behavior of enrollments was the opposite of that recorded by PT governments: in 2019, IFES had 1,114,495 students and in 2020 – the last year available from the Federal Government Census – this number dropped to 1,030,521, reversing the growth trend in enrollments. Enrollment in face-to-face courses at private institutions stagnated in the same period. The growth was on account of EAD, with all the risks involved, related to precarious, incomplete and not applied training, a subject that we have already addressed in another article on the blog.

In the comparison between the measures implemented for access to universities, we highlight that, in the Lula administrations, there was a restructuring of the ENEM in 2009 – the New ENEM -, the exemption of the registration fee for the exam for students from public education, the expansion of the use of ENEM for admission to Higher Education, with ProUni (2005) and SiSU (2010), and the quota policy, which began to be elaborated together with social movements, and ended up being published in 2012, under Dilma’s government .

In the Bolsonaro government, on the contrary, we witnessed attempts to interfere in the elaboration of the ENEM questions, so that they had ideological alignment with the government; delays in exam dates during the pandemic; the reduction in the number of students applying – in 2016, ENEM had 8.6 million participants and, in 2020, this number dropped to 5.7 million, a reduction of 33%; and several demonstrations by the president and ministers against the quota policy and affirmations that Higher Education should be for the few.

When comparing the total investments in Federal Universities (resources for works, laboratories, equipment, libraries), the picture is again enlightening, and astonishing. In amounts settled (paid) and deflated by the IPCA (for January 2022), the total invested in the Bolsonaro government is less than half compared to Lula’s 1st term and less than 1/3 compared to Lula’s 2nd term, taking the system on the verge of collapse. Funding (resources for maintenance, cleaning, water, electricity, etc.) at federal universities dropped to values ​​lower than in 2004, with the system having more than doubled in number of enrollments (from 560 to 1.2 million students), that is, , operating with less than half the resources per student (R$/enrollment) than in the Lula government.

If we consider the amounts invested in scholarships and research in the country, in amounts settled and deflated by the IPCA (for January 2022), the CNPq (National Council for Scientific and Technological Development) in the 1st Lula government made available R$ 5, 05 billion; in the 2nd Lula government, R$ 5.34 billion; and in the Bolsonaro government, R$ 3.5 billion (updated 2022 data, extracted on 10/26). Capes (Coordination for the Improvement of Higher Education Personnel), in 2016, the year of the institutional coup in Dilma, invested R$ 6.6 billion, mainly in scholarships, in Brazil and abroad; With Bolsonaro, we reached R$ 3.3 billion in 2021, that is, half the resources of six years ago, confirming the trend of cuts that disrupt the research system, with the loss of researchers, who either had to look for other sources of research. income or were attracted abroad.

Another decisive source for the production of knowledge in Brazil is the National Fund for Scientific and Technological Development (FNDCT), which has had its resources blocked in recent years to the point that R$ 35 billion has been stopped in the National Treasury account. In 2021, under pressure from the Bolsonaro government, Constitutional Amendment 109 was approved, and these resources were withdrawn, which allowed the federal government to use the balances of all public funds for the Treasury account. Nobody knows exactly what was the destination of these resources and the amount that should have been used to finance research, innovation, development of technologies, goods and services, the training of highly qualified researchers, scientific and technological exchange and implementation, maintenance and recovery of research infrastructures, was for other purposes. In other words, what was destined for science and research grants took another turn and it remains to be seen if it was not used for the so-called Secret Budget.

From the angle of education and science, in their articulation with society, in an inclusive, democratic, strategic and sovereign perspective, it is not difficult to recognize that we are facing the impasse between “civilization or barbarism”. A new Bolsonaro term could bring the system of knowledge production in Brazil to a total collapse, keeping some niches of market interest, and drastically reducing our perspective as a citizen and a nation capable of building its own future. A new Lula government will have the challenge not only of rebuilding what was destroyed, but of daring to advance, increasingly, towards a plural and inclusive society, with informed and well-educated citizens, who know how to do science, build knowledge based on evidence, have discernment and critical capacity so that this negationist and obscurantist tidal wave is just part of the past, to be studied by historians of the future.

Facebook
Twitter
Pinterest
WhatsApp
Previous article
Archbishop of America Elpidophoros: The bravery and values ​​of the Greeks remain unchanged in the century
Next article
Sakellaropoulou: The spirit of national unity forged in the Albanian saga is a precious legacy for all of us