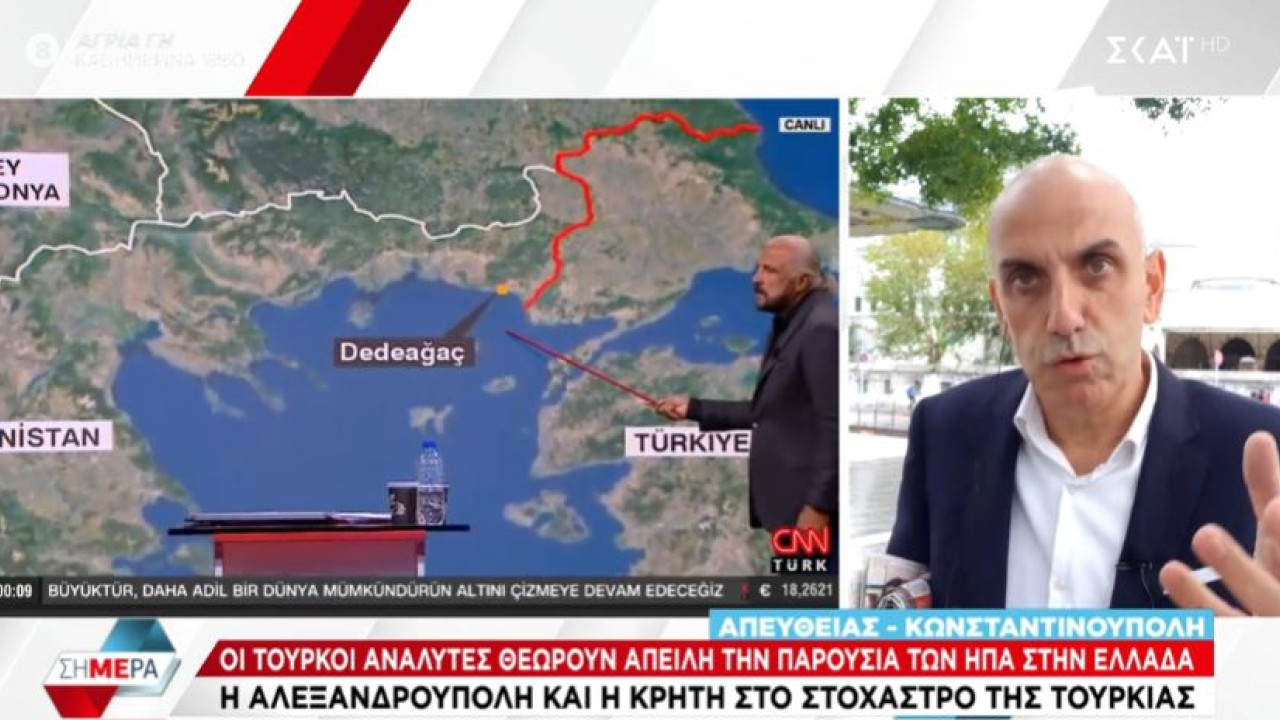 The Turkish media have their “hava”: the USA threatens Turkey through Alexandroupolis and Crete

Alexandroupolis and Crete were once again in the sights of the Turkish media, continuing the narrative of a threat against Turkey from American bases.

As broadcast from Constantinople, the correspondent of SKAI Manolis KostidisTurkish analysts claim that the US is establishing bases in Crete and Alexandroupolis to target and besiege Turkey.

In fact, a television show on the CNN Turk channel presented a map of the American bases in Greece, with the Hurriyet newspaper analyst Amtulkadir Selvi talking about a “chain” which has been created across from Turkey and extends from Alexandroupolis to Cyprus.

“When we refer to what is happening in Cyprus, we must see the events from Alexandroupoli. There in Alexandroupolis, a circle, a chain is created. There are naval bases, air bases, early warning systems. So there are 9 to 10 bases there. They control the Aegean and are now coming to the Mediterranean. There is Crete, but it is not enough for them. They reach the Mediterranean.”

He went on to argue that Turkey is being provoked through Greece while bringing it back propaganda to lock down Turkish fighters from Greek S-300s and even talked about attacks against commercial ships: “The arrival of the USA in Cyprus and the provision of weapon systems is a step. Because they challenge us through Greece. Because Greece either locks our fighters with S-300 radars or attacks commercial ships,” he said.

At the same time, the military analyst Mete Jarar focused on Alexandroupoli and stated that the US has “specific goals” when establishing a military base: “Since the ships will not pass through the Straits, what is your goal from the Alexandroupolis naval base? What will they achieve with a naval base here? I always say that when the US has specific and different goals they always come with their bases,” he said

“They tell us that they are coming to Alexandroupolis to support Ukraine, because we closed the Straits due to the war. And to the ships of Ukraine and Russia and we announced this so that they don’t get any help.. Fine but then why don’t you go through Poland there is no sea”, he concluded

Facebook
Twitter
Pinterest
WhatsApp
Previous article
Anastasiades “nullified” Lavrov after Putin’s speech – They did not meet in New York
Next article
Notre Dame: A new series set against the background of the night that the iconic Notre Dame burned down is coming to Netflix – Watch the trailer