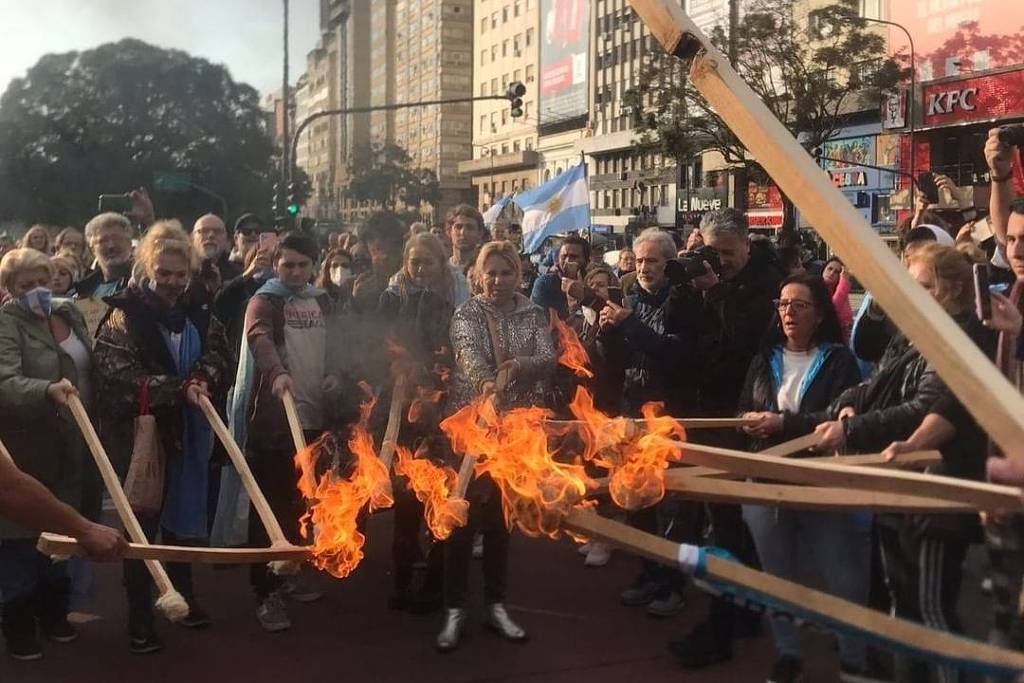 Jonathan Morel and Leonardo Sosa, both 23, are partners and work in a woodworking shop in the Boulogne neighborhood of Greater Buenos Aires, with another small group of employees. Until the beginning of this year, they had hardly been involved in politics; they debated the situation in the country in a revolting tone with bar friends in the region.

In May, they founded the Federal Revolution, a so-called apolitical group of social protests whose main target of criticism and attacks is the current government of President Alberto Fernández and his deputy, Cristina Kirchner. The organization has now become the subject of an investigation request by Judge María Eugenia Capuchetti, who is handling the case of the attack on Cristina, perpetrated earlier this month.

Morel and Sosa, while still teenagers, were briefly involved in Mauricio Macri’s 2015 presidential campaign, helping to distribute street propaganda — but they were not thrilled with the rightist’s victory. Some of his friends were even encouraged by the proposals of Javier Milei, a populist libertarian elected deputy in the last legislative election — but they were not. They always wanted, in their words, to do something more daring.

“I don’t give a damn about or support any politician, I think the most important thing we do is provide ways for people to express their nonconformity in the streets”, says Morel to Sheet. What, then, is your particular nonconformity? “It’s just that I don’t know what to do, what my future will be. In fact, I don’t see a future for Argentina; I see families having to share a package of pasta between eight people, retirees begging. It’s a lot of anger.”

His Federal Revolution began to produce posters against government authorities and to carry out the so-called “escraches” in their homes — as in the 1980s, when these acts of public embarrassment were carried out in the residences of repressors of the dictatorship with impunity.

The big protest that marked the beginning of the group’s activities was the so-called March of the Torches, in which its members walked in the center of the capital with posters urging people to “persecute politicians and journalists who were complicit in the return of Kirchnerism — and end them.” “.

In addition to the torches themselves, the demonstration had guillotines (manufactured in the woodwork of the two boys) and posters with the phrase “All arrested, dead or exiled”, with the word “all” written as in the Kirchnerism logo, with a sun in place of the letter “o”.

According to Morel, the group doesn’t just have young people among its followers. There are unemployed, retired people, “people that the system is expelling and leaving with nothing”.

A young woman selling cotton candy, then unknown to the founders of the Federal Revolution, joined a protest on the 18th of August. Her name was Brenda Uliarte, today arrested on the charge of having planned the attempted murder of Cristina, carried out by her boyfriend, the Brazilian Fernando Sabag Montiel, on the 1st, in front of the vice president’s residence, in the Recoleta neighborhood. .

“We have no ties to the cotton candy gang,” says Morel, referring to the name by which the group of Sabag, Uliarte and two others accused of involvement in the case, Agustina Díaz and Gabriel Carrizo, became known. The young man also claims to repudiate the attack, denying that he was an encourager, albeit unintentionally, of it.

“What happens is that things sometimes get out of control. When we went to protest against [o ministro da economia] Sergio Massa, the idea was just to shout, insult. But people got carried away with emotion and kicked his car.”

Judge Capuchetti, in any case, asked that the movements of the members of the Federal Revolution also be investigated, with the opening of a parallel investigation to investigate other possible links between the group and the attempt to kill Cristina.

One of the clues that the Justice follows to establish these connections is a set of lives and audios in which the group talks about how to infiltrate a column of La Cámpora – an organization of young Kirchneristas – with the intention “to set something up”, such as collecting intelligence data or do some aggression.

Another loose thread is the fact that Uliarte had said in messages to a friend, after the failed attack on Cristina, that, if necessary, he had “contacts and friends”. In her testimony to the Justice, she would have alluded to contact with members of the Federal Revolution.

Morel is reluctant to be called an extremist and, in this sense, says he is not opposed to various leftist agendas. “I’m bisexual, in favor of abortion rights. I have nothing to do with the way people want to live. My scolding is with politicians who steal our future.”

That’s why, he says, he doesn’t see politics as a way to conquer rights. “We want to take to the streets, stimulate the revolt of those who don’t know their rights, who have had their jobs precarious — app drivers, delivery guys, call center workers, people who don’t have a future ahead.”

After the attack on Cristina, the group preferred to get off the streets for a while. From time to time, its members can be seen at the Casa Rosada gate, shouting insults at employees who come and go. Their posters are still attached to the grid. In woodworking, however, meetings always happen. “We will not stop, but neither will we let them link us to acts of violence.”

Corruption allegation has a new hearing this Friday

The vice president’s lawyers conclude this Friday their defense in the case in which she had a request for arrest made by the Public Ministry.

The action, which is yet to be judged, with the possibility of appeal, is led by prosecutor Diego Luciani, who also requested that Cristina be permanently disqualified from running for public office and sentencing another eight accused of corruption.

The lawsuit in which Luciani asked for the prison sentence for Cristina is linked to a charge of criminal association, administrative improbity and fraud. The vice president is accused of running a scheme and, through it, favoring businessman Lázaro Báez – who has won dozens of public works concessions since the rise to power of former president and former governor of Santa Cruz province Néstor Kirchner. , died in 2010.