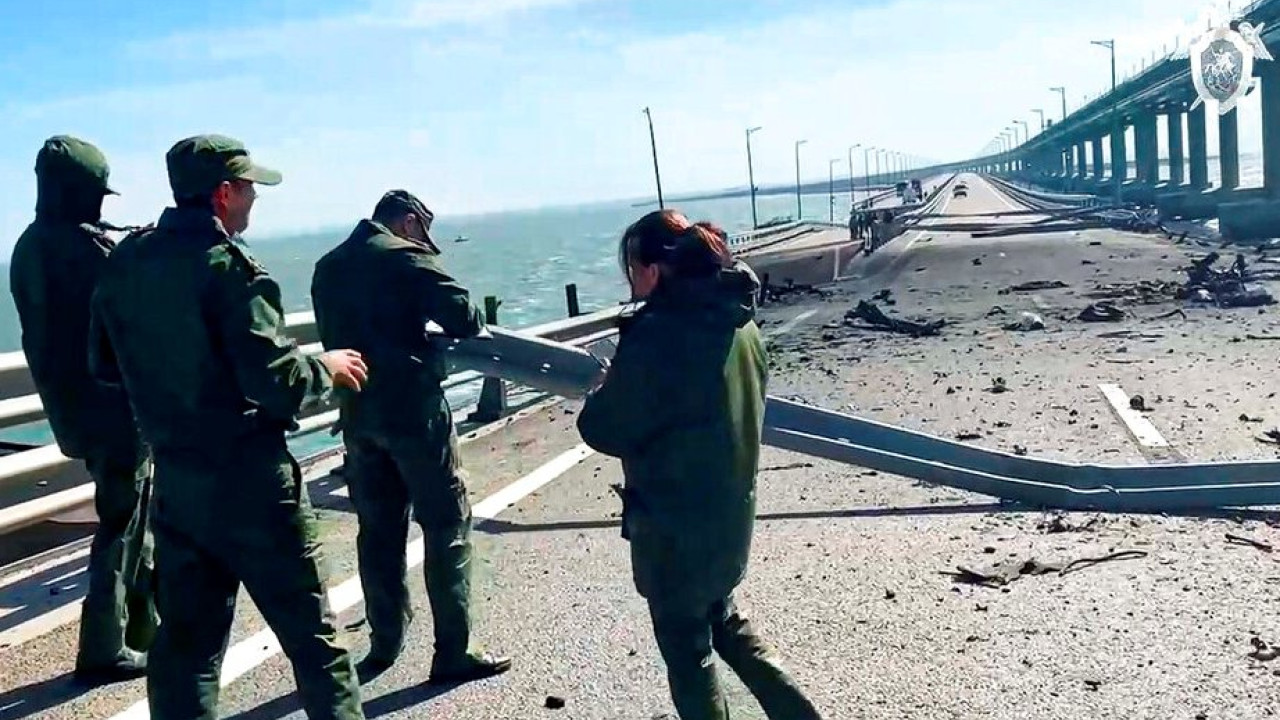 London: The attack on the Crimean bridge will “touch” Putin – The military impact is significant

What the British Ministry of Defense says about “Putin’s childhood friend” – “The situation is manageable – it is unpleasant, but not fatal”, however, the Russian governor of Crimea told reporters

Britain’s Ministry of Defense announced in its analysis on Sunday that two of the four lanes of its roadway Kerch Bridge in Crimea collapsed in several places, over a length of 250 meters, speaking of a significant military impact from the explosion, and of an incident that would “touch» him Vladimir Putin.

The ministry typically states that “the extent of damage to the bridge’s railroad crossing is not clear, but “any serious disruption to its capacity will very likely have significant impact to Russia’s already difficult ability to maintain its forces in southern Ukraine.”

“The railway crossing played a key role in the movement of heavy military vehicles on the southern front (of Ukraine) during the invasion,” it said.

“This incident will probably particularly touch President Putin; it came hours after his 70th birthday, he personally supported and inaugurated the bridge, and its construction contractor was his childhood friend, Arkady RotenbergLondon notes.

Find out more about the UK government’s response: https://t.co/FEGhiU7s8U

Russian divers will examine the damage

Russian divers will examine on Sunday the damage caused by the powerful explosion on the Crimea bridge, which carries trains and vehicles and is a symbol of Moscow’s annexation of the Crimean peninsula and a key supply route for Russian forces operating in the south Ukraine.

Yesterday’s explosion on the Kerch Strait bridge sparked messages of excitement from Ukrainian officials, but there was no claim of responsibility. Russia did not directly blame Ukraine.

Russian Deputy Prime Minister Marat Kushnulin said divers would begin work in the morning, with a more detailed inspection of the waters expected to be completed by the end of the day, Russian news agencies reported.

“The situation is manageable – it is unpleasant, but not fatal,” the Russian governor of Crimea, Sergei Aksyonov, told reporters. “Of course, it stirred up emotions and there’s a healthy desire for revenge.” According to him, on the peninsula there are reserves of fuel for one month and food for two months. The Russian Defense Ministry has assured that its forces in southern Ukraine will be able to “fully resupply” through existing land and sea routes.

Crimea came under Russian control from Ukraine in 2014, and the 19km-long Crimean Bridge, which connects the region to Russia’s transport network, was inaugurated with fanfare four years later by President Vladimir Putin.

Kyiv has been demanding Russian forces withdraw from the Black Sea peninsula as well as Ukrainian territory it has seized since Putin’s invasion began in February.

The bridge is a key artery for Russian forces who control most of the Kherson region in southern Ukraine and for the Russian naval base of Sevastopol, whose commander told residents “Calm down, don’t panic.”

It was not yet clear whether the explosion was deliberate, but the damage to such an important structure came while Russia is suffering defeats on the battlefields and may put further dispute the Kremlin’s assurances that the conflict is progressing according to plan.

Yesterday, Putin signed a decree to strengthen security at the bridge by the FSB, as well as the infrastructure that supplies electricity and natural gas to Crimea, and ordered an investigation.

“Perhaps the Russians can rebuild it, but they cannot defend her while they are losing a war,” said James Nixey, a political analyst at Britain’s Chatham House Institute.

Russian officials said three people were killed, possibly in a car driving near the truck that exploded. On the upper level of the bridge, seven fuel tanks on a 59-car train headed for the peninsula caught fire.

Ten hours after the explosion, vehicular traffic was partially restored while the Russian Ministry of Transport gave the green light for trains to start running.

In the city of Zaporizhia, in southeastern Ukraine, at least 12 people were killed and 49 injured and hospitalized, including six children, due to Russian missile attacks, the regional governor announced today.

Facebook
Twitter
Pinterest
WhatsApp
Previous article
What connects the island of Skiathos with South Korea?
Next article
The “unforgivable” Clint Eastwood, the “no” of John Wayne, the first Oscar