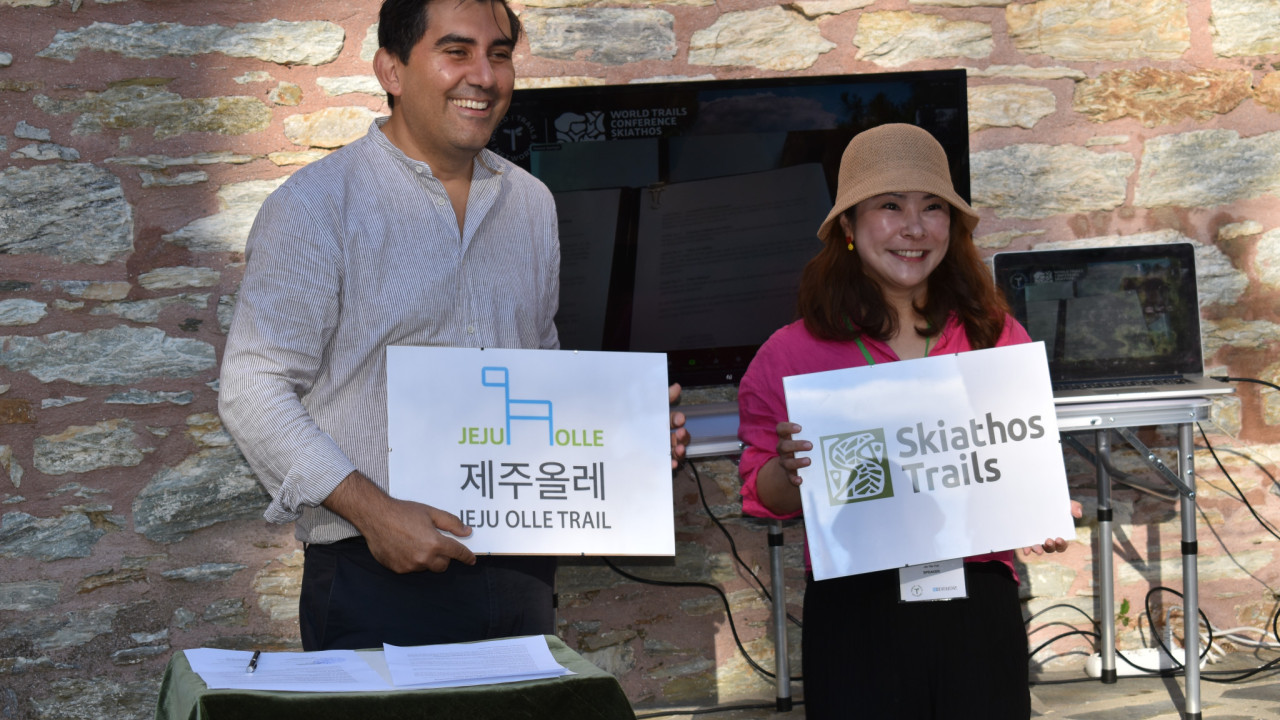 What connects the island of Skiathos with South Korea?

“Skiathos is a walker’s paradise” – Skiathos, as stated by WTN president Galeo Saintz, with its distinct paths is an ideal walking destination.

What connects her island Skirmish with South Korea? A path. Not just any trail though, but the Castle Trail which has recently been twinned with South Korea’s Jeju Olle Island Trail. However, this is not the only thing the two destinations have in common, or rather a larger connection emerges from it: That both are investing in walking tourism, with South Korea having led the way long ago. After all, Skiathos is an island of the Sporades that bustles with life in the summer and is a popular tourist destination. But is this enough? For the mayor of the island, Thodoris Tzouma, the answer is simple: “It is not enough to have a one-sided tourism development. Our island has all the guarantees to highlight other forms of tourism, such as walking, and to create the conditions for extending the tourist season, which is an important request for everyone”, he says, speaking to the Athenian and Macedonian News Agency.

“Skiathos is a hiker’s paradise,” notes Mr. Tzoumas, and now he has acquired a new network of paths, which includes 15 routes, 100 km, one of which is for people with special needs. This was done in collaboration with Paths of Greece, a member of the World Trails Network -WTN, with whose contribution we have also modernized the signage and infrastructure.”

“The culmination of our interest in “investing” in walking tourism, but also a point of reference for our further and more targeted actions, was the holding of the 8th World Trail Conference of the World Trails Network-WTN, which is the largest international trail conference in the world and it took place in the last week of September in Skiathos with the participation of 36 speakers and 161 delegates from 48 countries”, emphasizes the mayor.

“It was the first time that the said conference took place in Greece and this contributed not only to the promotion of Skiathos but also of the whole country. Moreover, more than 120 people, on the occasion of the conference, visited Zagori, Crete and Sifnos to follow their walking routes, and all this at the end of the summer season”, emphasizes Mr. Tzoumas.

In the framework of the conference, in a special ceremony at the Holy Monastery of the Annunciation, the twinning ceremony with the path of Jeju Olle Island of South Korea took place, where the participants walked the path of the Castle with enthusiasm and with the students of the Environmental Group of the High School as guides. Skiathos.

Skiathos, as mentioned by the president of WTN, Galeo Saintz, with its distinct paths is an ideal walking destination. The aim is to establish the important role that trails play in adventure tourism, mobility, rural economies, sports and outdoor recreation, and why we need trails and why trails need us.

“Our focused networking products and campaigns are driven by international collaboration across our Network through our Trails Task Groups, which deliver results on the 8 broad World Trail Conference themes,” he added.

Regarding the event, the Deputy Minister of Tourism Sofia Zaharaki said “that this is a very big and important event for Greece and Skiathos and pointed out the policies of the government and the Ministry of Tourism which revolve around the three axes “Sustainability- Balance- Quality” , which are also the bet of this year’s tourist season and are a “triptych” of tourist development, which the municipality of Skiathos follows”.

The International Organization World Trails Network -WTN, based in Geneva, is a global representative body of all kinds of trails with members all over the world, it is a non-profit organization with headquarters in Geneva and regional hubs in Asia, the Mediterranean and the America. Leading members include the Appalachian Trail, Camino de Santiago, Jeju Olle trail, Great Himalayan Trails and more.

The World Trail Conference is organized by WTN and is the largest international gathering of trail professionals and enthusiasts in the world. It brings together leaders from government organizations, non-profit organizations, civil society, business and the academic community to collaborate, share and define best practice strategies for some of the most important global sectors such as tourism. It is the only conference of its kind that provides a truly global platform, where paths from many different countries can meet.