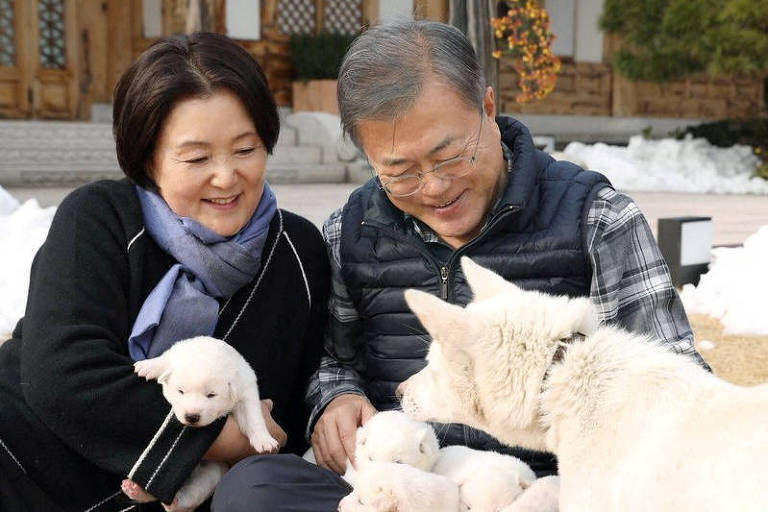 In 2018, the dictator of North Korea, Kim Jong-un, presented the then president of South Korea, Moon Jae-in, with two dogs of the valuable Pungsan breed. The agreement was a sign of the resumption of dialogue between Pyongyang and Seoul and followed a rare meeting between the leaders of the two countries. Today, four years later, the relationship between neighboring nations is the opposite: as military tensions in the region increase, even the previously donated dogs have become the subject of discussions.

On Monday, Moon said he plans to hand the pair of dogs over to the government in Seoul, citing pressure from current South Korean President Yoon Suk-yeol. After the change of government in May, the dogs, Gomi and Songgang, were taken to the home of Moon, who is known to be fond of animals. He, for example, has four other dogs and three cats.

It turns out that the current government does not consider that Kim’s gift was specifically intended for the former South Korean president. In the country, treats sent by other leaders are classified as state property, including dogs.

When he left power, however, Moon allegedly discussed the legality of the matter with the Interior Ministry, which, according to him, assured him that he would take the two dogs home – a decision, according to Reuters, was unprecedented. In addition, local media points out that the former president receives from the state about 2.5 million won (R$ 9,183) a month to care for the animals.

To facilitate the process, state agencies tried to pass a legislative amendment on the matter, including financial support. But the discussion was fought by the opposition of the current government, classified as “inexplicable” by Moon’s team. “The presidential office appears to be unwilling to entrust the management of the Pungsan dogs to the former president,” Moon’s office wrote on Facebook.

Yoon’s office, on the other hand, denied that his government had any influence on the issue and said agencies were continuing to discuss the issue. The Interior Ministry, which oversees presidential files, did not respond to Reuters requests for comment.

Conservative Yoon Suk-yeol won South Korean elections in May, beating a Moon supporter by less than 250,000 votes. The current president even served as attorney general in the Moon government, before breaking with the president and running for the People’s Power Party.

Regardless of the end of this battle, the dispute over the dogs is already symbolic. That’s because historically dogs have been symbols of the unfreezing of ties between the two Koreas. In 2000, for example, according to CNN, then-dictator Kim Jong-il gave two Pungsan puppies to President Kim Dae-jung. The South Korean, meanwhile, returned the favor with two dogs called Peace and Reunification.

At the time, the two dogs sent by the North Korean were raised in the official residence and later taken to the Seoul Zoo – where they lived separately from other animals and received luxurious food.

Interestingly, the pair died in 2013 when relations between the two countries took a turn for the worse, with North Korea launching its third nuclear test in seven years. Now, in 2022, the global community fears Pyongyang is planning yet another such exercise – the last one was in 2017. By default, Seoul is well aware of the future of Gomi and Songgang.

Facebook
Twitter
Pinterest
WhatsApp
Previous article
War in Ukraine: In Kyiv and Kherson the fronts – “It is genocide” says the mayor of the capital
Next article
Karagiannis: At 158.4 million euros the investment for the Logistics Park in Thriassio – 3,000 new jobs are created