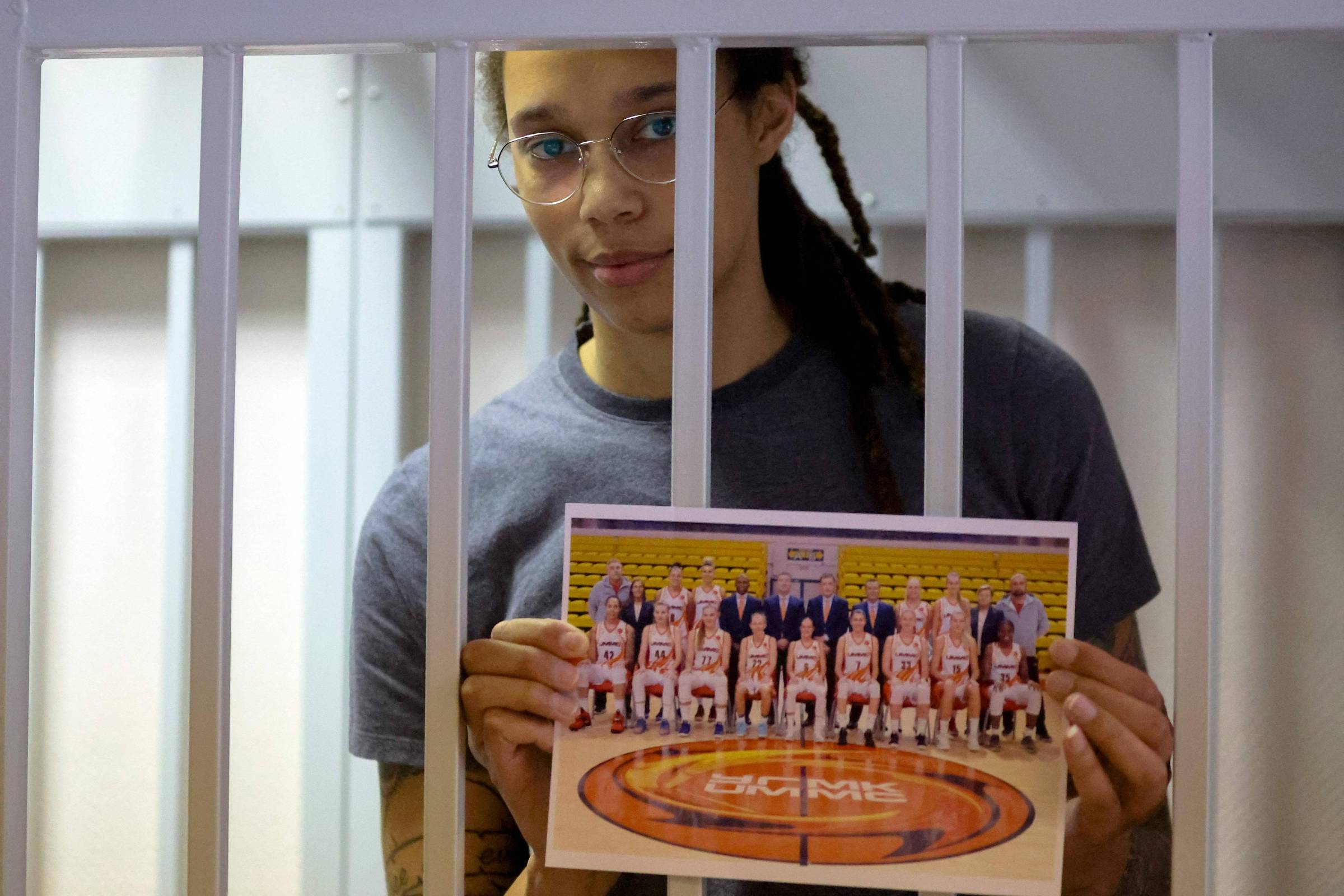 Brittney Griner: what awaits the American basketball star in a penal colony in Russia

Basketball player Brittney Griner has been transferred to a Russian penal colony in a remote region southeast of Moscow to serve nine years in prison for illegal drug possession.

Griner is one of tens of thousands of Russian women behind bars, and no one knows how long she will be locked up.

The United States intends to carry out a prisoner exchange to free her. But until that happens, her life in a Russian prison will certainly not be easy. She will likely face the same conditions as any other prisoner.

Griner lost her appeal against her drug possession conviction in early November when she was taken from a Moscow detention center to a penal colony. But only now do we have any idea where she is.

Her lawyers have confirmed that she is being held at the IK-2 women’s penal colony in the remote village of Iavas in Mordovia, 500 km southeast of the Russian capital. Lawyers said she was “well, as expected, and trying to keep her strength as she adapts to her new environment.”

The phrase “penal colony” brings back memories of the gulags, the Soviet-era forced labor camps. But in this case it simply means a prison, with several rows of low buildings housing common accommodation for inmates and separate structures housing workshops for prisoners.

For days, no one, including her lawyers, knew where Griner had been transferred. This is normal in Russia, and when the inmates’ families cannot afford a good lawyer, it can sometimes take weeks for a letter from prison to arrive.

Griner Prison is one of Russia’s common prison colonies, housing most of the country’s prison population of 453,000 prisoners.

Those convicted of more than one crime or those sentenced for serious crimes are sent to restricted or special regime colonies. The difference between the types of penal colony is in the allowed number of visits from relatives, receipt of packages of food or clothing, and the severity of punishments for breaking the rules. Some serious crimes are punishable such as isolation in cells without access to the open air.

At the other end of the penitentiary scale are the “colonies-settlements” for those who have committed minor crimes. These are more flexible and even allow prisoners to serve their sentence in a semi-open regime.

Women make up about 5% of Russia’s prison population. As a result, there are far fewer prisons for women, which means that many relatives have to travel further to visit them.

Griner’s conviction comes as no surprise: 13.5% of all convictions in 2021 were issued for possession, smuggling or dealing in illicit drugs. For women, this rate rises to 42%, although not all were in custody.

Russian police have been accused for years of increasing crime statistics, planting drugs or pressuring detainees to extract confessions. But that wasn’t the case with Griner. She admitted to having vape cartridges filled with cannabis oil in her luggage when she returned to Russia in February to play basketball during the American season break.

She is a WNBA champion and an Olympic gold medalist, but she doesn’t speak Russian and there are no correctional facilities for foreigners. But there are 20 prisons that house several law enforcement officers convicted of crimes, so they don’t mix with criminals they helped arrest.

For male prisoners, violence is an ever-present threat, whether from fellow prisoners or jailers. In recent years, videos of torture, rape and humiliation have appeared, seen as proof of the existence of organized systems of intimidation, extortion and obtaining confessions, carried out by detainees and induced by prison authorities.

This type of violence does not occur in women’s prisons, but Olga Podoplelova, from the NGO Russia Atrás das Grades, says that the life of the inmates is not easy.

“There is no established informal prison hierarchy in women’s prisons, but the administration controls everything and there are many ways to make an inmate’s life hell,” she said.

Under Russian law, detainees must work. Most comply, as refusal usually brings problems. But the upper caste of convicts in the male criminal hierarchy (known as “blatnie”), in principle, refuse to work.

The prison regime provides for very low wages for conditions that many observers call slave labor.

“Detainees work 12 to 16 hours a day, with breaks for lunch and bathroom breaks,” says Podoplelova. “The daily quotas set are very high, but an official salary is normally divided among several inmates. As a result, prison workers only earn a few hundred rubles a month in pay.”

This amount is equivalent to a few dollars (in the range of tens of reais) per month — a fraction of what even the poorest people in Russia earn in wages for the maximum 40-hour work week provided for by the country’s legislation.

Men in penal colonies often work in woodworking or welding. Female prisoners, on the other hand, are invariably employed to sew clothes, mainly uniforms for the prison service, the army or the police.

The equipment is old and the workplaces poorly equipped, so Griner, who is 2.06 meters tall, will have to crouch down to operate the sewing machine.

The penal colony of Iavas — where Griner is believed to be imprisoned — does not have a good reputation. Prisoners who worked there reported physical punishment and intimidation. “I worked as a seamstress and there is a law: if you don’t meet the production speed, you’re beaten,” as former prisoner Irina Noskova told the Russian newspaper New Times in 2013.

Attempts to fight for the rights of working detainees are rare.

Two women who raised the issue with a hunger strike were Maria Alekhina and Nadejda Tolokonnikova, who were jailed for two years after their band Pussy Riot performed a punk gig at a Moscow cathedral in 2012.

Alekhina served her sentence in two common prisons and claims that the traditions created in Stalin’s time with the gulag system are still alive. “All this [trabalho] it’s done without a normal diet, without a normal medical system and without any defense of human rights,” she recently told Reuters.

Tolokonnikova, meanwhile, served part of her sentence in another women’s penal colony near Iavas.

The best-known Russian prisoner is opposition politician Alexei Navalni. He also took up the fight for better prison conditions and pay.

He is currently serving a nine-year sentence in a restricted colony 250 km east of Moscow. In June, Navalni was transferred to penal colony IK-6, which his lawyer described as a “monstrous place”. Before heading to IK-6, he was imprisoned in Pokrov, closer to the Russian capital.

Navalni was forced to sew clothes, but managed to convince the authorities to replace the old short four-legged stools with swivel chairs suitable for them and some colleagues.

In August, he announced the creation of a labor inmate union, but so far, no other inmate has dared to join.

Since then, he has spent repeated periods in solitary confinement for transgressions such as wearing his uniform unbuttoned or failing to keep his hands behind him when walking in front of the guard.

His conditions were further tightened in November, when his allies claimed he was moved to a “covered cell block” with no access to the open air. On the Telegram messaging app, Navalni described his cell as “very small… like solitary”.

Prison made it difficult for him to communicate with defense attorneys. The glass screen that separated them was replaced by an opaque film and they were prevented from showing documents. “I’m in a 1 meter by 1 meter room, facing a plastic wall with human outlines behind it,” he complained.

Brittney Griner is unlikely to face this kind of pressure. But the possibility that her foreign passport and sporting fame will offer some relief from the conditions faced by ordinary prisoners is slim.

Another prisoner that US authorities want to see released is former Marine Paul Whelan, arrested in 2020 on allegations of espionage. Like Navalni, he has been confined in solitary confinement and, like Griner, is being held in a penal colony in Mordovia, a short distance from the athlete.

– This text was originally published here.

Facebook
Twitter
Pinterest
WhatsApp
Previous article
Tsitsipas is in high spirits for the game “your death is my life” against Rublev
Next article
White House: Only Zelensky will decide on the start of negotiations with Russia