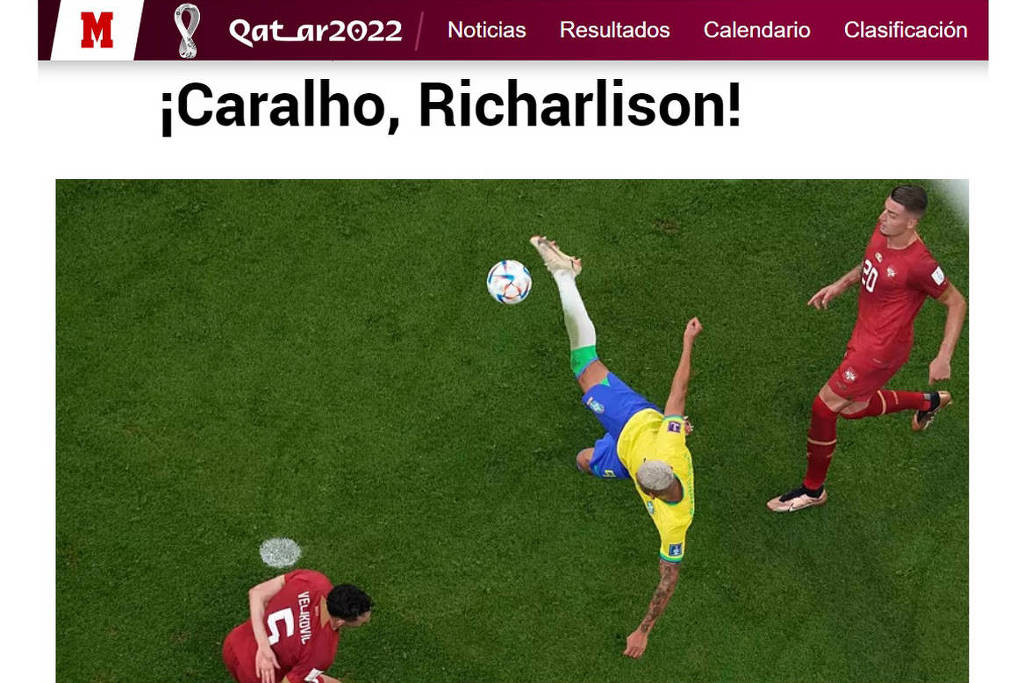 Nelson de Sá: Richarlison is already ‘the new Brazilian star of the Cup’, in sports coverage

Richarlison’s second goal loosened the grip of coverage on the Qatar Cup, exemplified by the title of the chronicle in the Spanish sports brand Marca: “Fuck, Richarlison!” (above).

In the text, “they say he’s crazy” and that was “that’s how he scored 1-0 and crowned himself with a fantasy 2-0, with a pair of scissors” (tijereta). In the headline video, “Richarlison’s barbarity goes straight to the museum of the best goals in the history of the Cups”.

In the also Spanish As, “Brazil already makes magic”. And the Argentinian Olé headlined Richarlison’s “golazo”, justifying in the text: “What Brazil’s 9 did against Serbia is universal, it’s magical”.

In its English language coverage, The Athletic website, a bet by the New York Times to grow in sport, featured a profile of Richarlison, “The new Brazilian star of the World Cup” (below), showing her journey, since when she had “a gun pointed to the head”.

The goal was described as “dazzling” in the NYT itself: “Richarlison watched the ball spin in the air, heaved himself off the ground and, contorting his body, met it with a full and pure volley. The noise that greeted the goal illustrated the its wonder: not a celebration, but a loss of breath”.

The Athletic, English The Guardian and others described it as a “bicycle kick”. Germans such as Frankfurter Allgemeine Zeitung preferred to simply call it a “dream goal”.

Le Figaro and other Frenchmen chose to focus on the Paris-playing star, “Neymar in tears and hurt”.