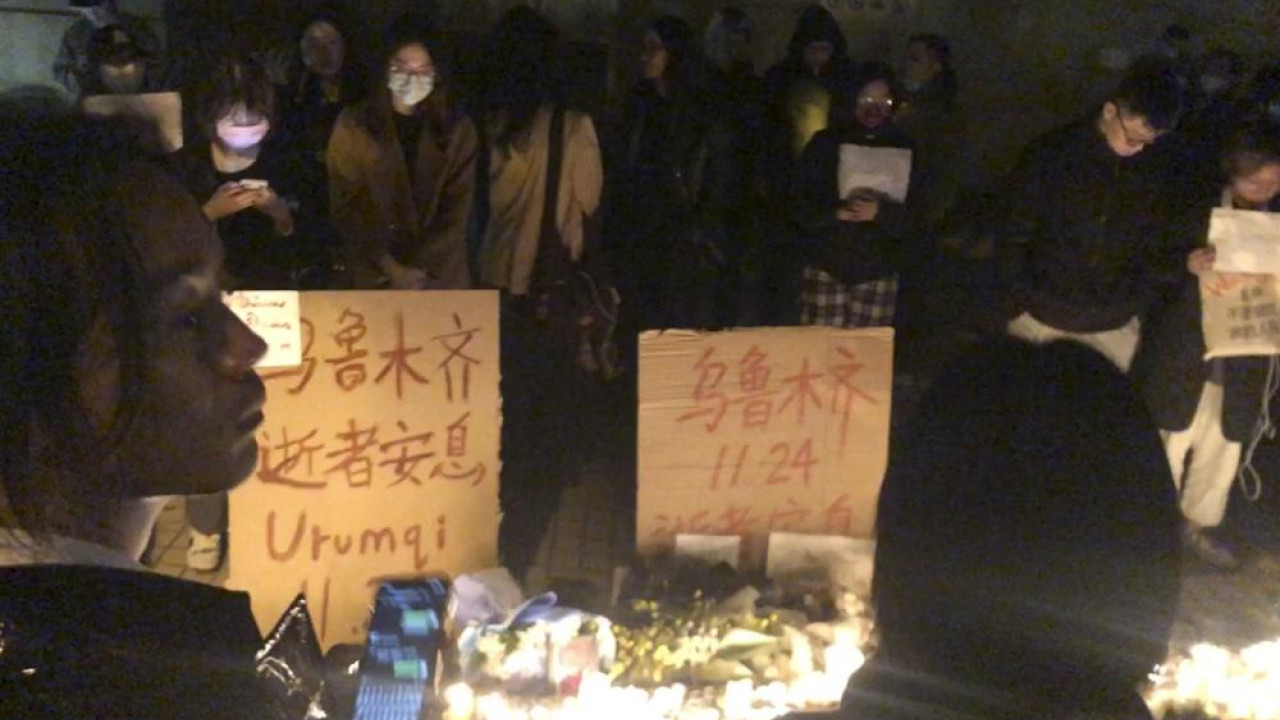 The government has imposed strict restrictions on some urban centers as part of Beijing’s “zero tolerance” policy towards Covid-19.

Demonstrators took to the streets of Shanghai today, following the initiatives of residents in other parts of China, reacting to the imposition of strict containment measures against the spread of Covid-19 almost three years after the outbreak of the pandemic.

The spark that ignited the fire of protests was last Thursday’s deadly fire in northwest China’s Xinjiang province. Ten people have died in a fire that broke out in a high-rise apartment complex in the city of Urumqi, the capital of Xinjiang region, with many speculating that the victims were unable to leave the burning building in time because they were under quarantine, a claim denied by local officials. .

Some even started chanting “Down with the Chinese Communist Party, down with Xi Jinping, freedom in Urumqi,” in a rare public disapproval of the Chinese government, according to witnesses reported by Reuters.

Heavy police force was present at the spot and at times tried to push back the gathered crowd.

China is facing a surge in coronavirus cases and the government has imposed strict restrictions on some urban centers as part of Beijing’s “zero tolerance” policy against Covid-19.

Authorities are defending President Xi Jinping’s signature policy as lifesaving and absolutely necessary to keep the national health system from collapsing, defying popular outcry and a blow to the world’s second-largest economy.

Shanghai’s 25 million residents were put under lockdown for two months earlier this year, an ordeal that sparked angry protests. Since then, Chinese authorities have tried to make the containment measures more targeted, but margins have narrowed after the recent surge in cases.

On Friday night, protesters took to the streets of Urumqi raising their fists in the air and calling for the lockdown to be lifted, according to videos posted on Chinese social media. Many of Urumqi’s 4 million residents were forced to stay indoors for up to 100 days.

In Beijing (2,700km away) some residents under lockdown took part in protests, also demanding the lifting of strict restrictions. In a video obtained by the Reuters agency, protesters can be seen in an outdoor parking lot shouting “End the lockdown”.

The coming weeks could be China’s worst since the start of the pandemic, both for the economy and the country’s health system, according to Capital Economics analyst Mark Williams.

Authorities in Shenzhen, a metropolis of 12 million people, announced today that they will limit the occupancy of restaurants and other indoor spaces to 50% as part of measures to combat the pandemic. Visitors to this southern Chinese city will not be allowed to enter venues such as theaters and gyms for the first three days of their arrival, the statement said.

For the fourth consecutive 24 hours, China recorded a record number of SARS-CoV-2 cases in 24 hours, reaching 39,791. In the last 24 hours, one death was reported due to complications of Covid-19, with the total number of victims of the pandemic reaching 5,233 out of a total of 307,802 cases with symptoms of the disease caused by the coronavirus, according to the official tally of the Chinese authorities.

Facebook
Twitter
Pinterest
WhatsApp
Previous article
A ring of drug dealers was dismantled in Nafplion, with activity in Athens and Santorini
Next article
The worst airplane passengers according to a flight attendant