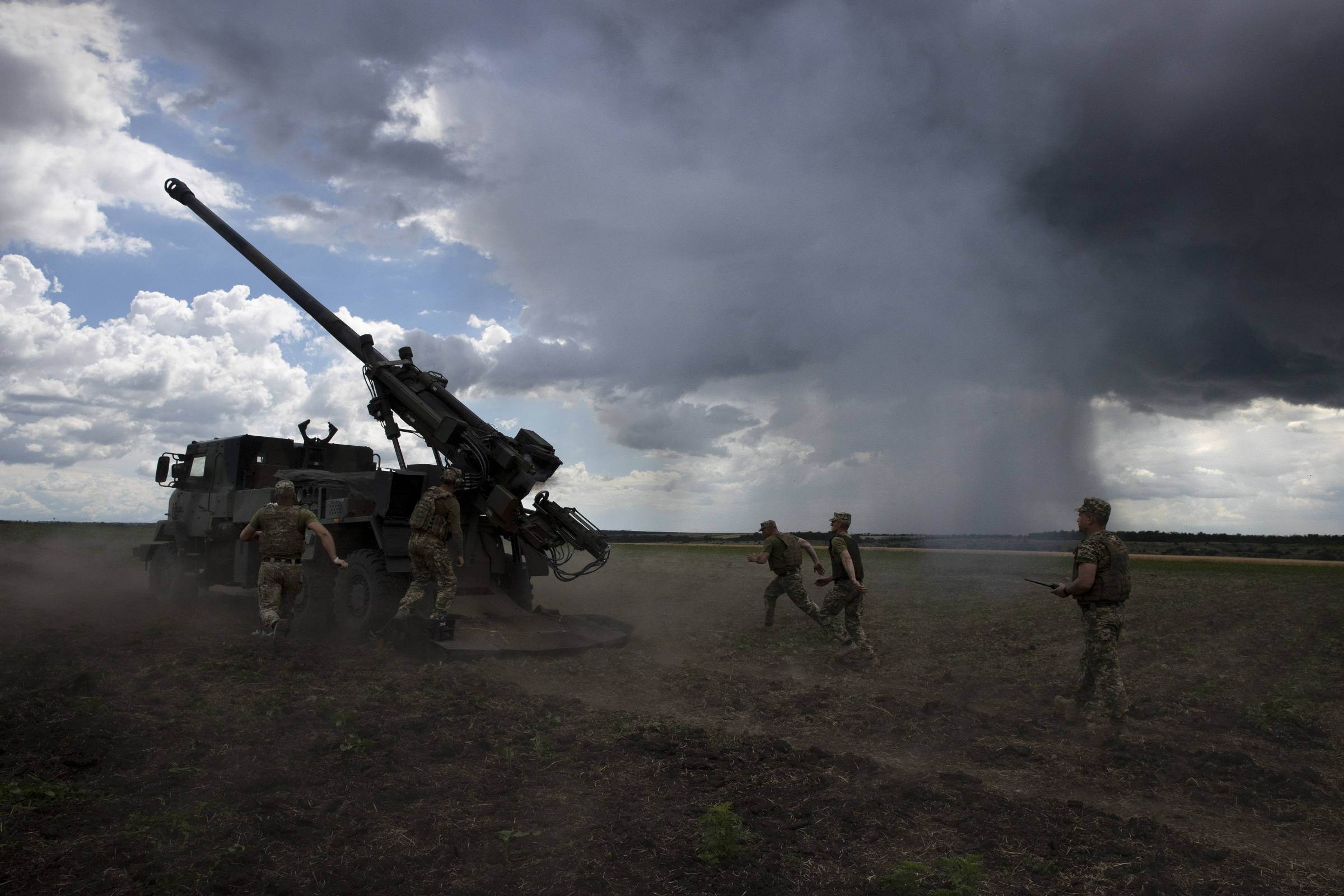 When the Soviet Union collapsed, European nations took advantage of the “peace dividend” by drastically reducing their defense budgets, armies and arsenals.

With the rise of Al Qaeda nearly a decade later, terrorism became the target, requiring different military investments and lighter expeditionary forces. Even NATO’s long involvement in Afghanistan bore little resemblance to a land war in Europe, with heavy artillery and tanks, that nearly all defense ministries thought would never be repeated.

In Ukraine, the kind of European war considered inconceivable is destroying the modest stores of artillery, ammunition and air defenses of what some in NATO call Europe’s “bonsai armies”, referring to the tiny Japanese trees.

Even the US has limited stockpiles of the weapons Ukrainians want and need, and Washington is unwilling to divert important weapons from sensitive regions like Taiwan and South Korea, where China and North Korea are constantly pushing the limits.

Now, nine months into the war, the West’s fundamental unpreparedness has triggered a mad dash to supply Ukraine with what it needs while replenishing NATO stocks. As both sides burn through weapons and ammunition at a rate not seen since World War II, competition to fill arsenals has become a critical front that could prove decisive for Ukraine’s effort.

The amount of artillery used is staggering, NATO officials say. In Afghanistan, Western alliance forces fired about 300 artillery rounds a day and had no real concern for air defense. But Ukraine can fire thousands of rounds daily and remains desperate for air defense against Russian missiles and Iranian-made drones.

“A day in Ukraine equals a month or more in Afghanistan,” says Camille Grand, a defense expert at the European Council on Foreign Relations who until recently was NATO’s assistant secretary general for defense investment.

Therefore, the West is scrambling to find increasingly scarce Soviet-era equipment and ammunition that Ukraine can use now, including S-300 air defense missiles, T-72 tanks and especially Soviet-caliber artillery shells.

The West is also trying to create alternative systems, even if they are older, to replace dwindling stockpiles of expensive anti-aircraft missiles and anti-tank Javelins. It is sending strong signals to Western defense industries that longer-term contracts are in the pipeline — and that more shift workers must be employed and older manufacturing lines must be overhauled. The West is trying to buy ammunition from countries like South Korea to replenish stockpiles sent to Ukraine.

There are even discussions of NATO investing in former factories in the Czech Republic, Slovakia and Bulgaria to restart the manufacture of Soviet 152mm and 122mm caliber projectiles for the still largely Soviet-era Ukrainian artillery arsenal. But the obstacles are as numerous as the solutions sought.

NATO countries—often with great fanfare—supplied Ukraine with some advanced Western artillery. But alliance systems are rarely certified to use munitions produced by other countries, which often manufacture projectiles differently. This is a way for manufacturers to guarantee the sale of ammunition for their weapons, in the same way that printer manufacturers make money on ink cartridges.

Russians also have problems with refueling. Now they are using less artillery shells, but they have a lot of them, although some are old. Facing a similar dispute, Moscow is also trying to increase military production and is looking to buy missiles from North Korea and more cheap drones from Iran.

Given Russia’s 2014 annexation of Crimea and the war in the Donbass region, NATO’s new military spending targets look modest: 2% of GDP by 2024, with 20% of that going into equipment rather than salaries and pensions. But even these were largely ignored by major member countries.

In February, when the Ukraine War began, many countries’ arsenals were only about half of what they should be, the NATO official said, and there had been little progress in creating weapons that could be used interchangeably by countries. Even within the European Union, only 18% of countries’ defense spending is cooperative.

For those NATO members who supplied Ukraine with large amounts of weapons, especially frontline states such as Poland and the Baltics, the burden of replacing them proved heavy.

The French, for example, provided some advanced weapons and created a €200 million (R$1.12 billion) fund for Ukraine to buy French-made weapons. But France has already given at least 18 modern Caesar howitzers to Ukraine — about 20% of all its existing artillery — and is reluctant to supply more.

The European Union has approved 3.1 billion euros (R$17.4 billion) to reimburse member states for what they provide to Ukraine, but that fund, the European Peace Facility, is nearly 90% depleted.

In total, NATO countries have so far supplied Ukraine with around US$40 billion (R$216.4 billion) in weaponry, roughly France’s annual defense budget.

The Ukrainians want at least four systems that the West has not and is unlikely to provide: long-range surface-to-surface missiles, known as ATACMS, which can reach Russia and Crimea; western fighter jets; western tanks; and a far more advanced air defense, said Mark F. Cancian, a former White House weapons strategist who is now a senior adviser to the Center for Strategic and International Studies in Washington.

As for air defense, Cancian said, NATO and the US phased out most of their short-range weapons after the Cold War, and there are few left to bring to bear. Producing more can take up to two years.

Maintenance is key, but there are smart answers for relatively simpler equipment, like the M-777 howitzer given to Ukraine. With the right parts, a Ukrainian engineer can connect with a US artillery officer at Fort Sill, Oklahoma, and talk about maintenance over Zoom.

Ukraine has also proved adaptable. Its forces are known within NATO as the “MacGyver Army”, a reference to an old television series whose hero invents and improvises with what he has.

To bomb Russian positions on Cobras Island, for example, the Ukrainians placed Caesars, with a range of 40 kilometers, on barges and towed them 10 kilometers to reach the island, which was 50 kilometers away, surprising the French. Ukraine has also sunk the Moskva, the mother ship of Russia’s Black Sea fleet, with its own retrofitted missiles, and built drones that can attack ships at sea.

US officials insist their military still has enough material to continue supplying Ukraine and defend US interests elsewhere. “We are committed to providing Ukraine with what it needs on the battlefield,” said Sabrina Singh, the Pentagon’s deputy press secretary, after announcing more Stinger missiles for Kiev.

Washington is also looking at older, cheaper alternatives, such as giving Ukraine TOW anti-tank missiles, which are plentiful, instead of Javelins, and Hawk surface-to-air missiles instead of newer versions. But authorities are putting increasing pressure on Ukraine to be more efficient and not, for example, fire a $150,000 missile at a $20,000 drone.

Some weapons are already running out.

In September, the US military had a limited number of 155mm artillery rounds in its stockpiles and a smaller number of guided rockets, rocket launchers, howitzers, Javelins and Stingers, according to an analysis by Cancian.

The shortage of 155mm artillery shells “is probably what planners are most concerned about,” Cancian said. “If you want to increase the production capacity of 155 projectiles, it will probably take up to five years before you start to see them come out the other side.”