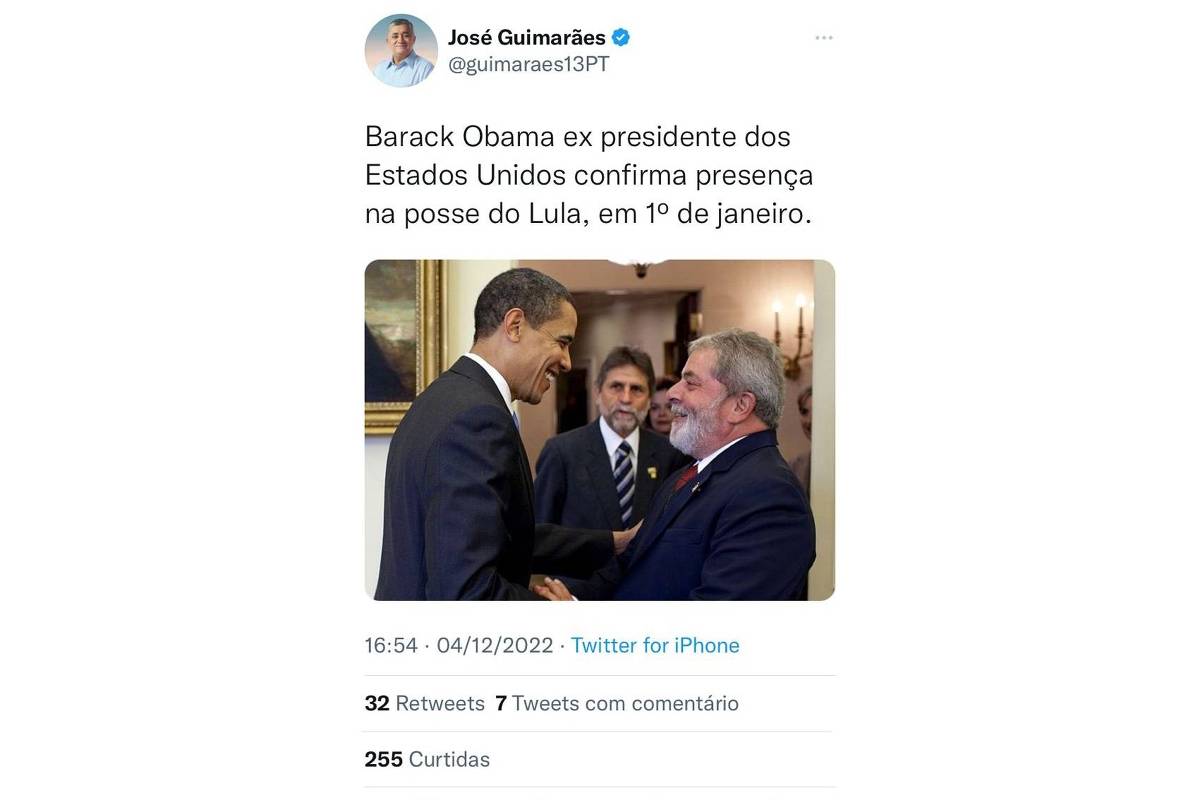 Federal deputy José Guimarães (PT-CE) announced this Sunday (4), on a social network, the presence of Barack Obama, former president of the United States, at the inauguration ceremony of president-elect Luiz Inácio Lula da Silva (PT), on January 1, 2023, in Brasilia. Shortly after, he deleted the post.

“Barack Obama, former US president, confirms his presence at Lula’s inauguration on January 1st”, wrote Guimarães on Twitter. The statement had already been posted earlier by unverified accounts. Sought, he did not respond until the publication of the report. Lula’s advisory said “they don’t have that information”.

One of the vice-presidents of the PT, Guimarães is a member of the national executive of the acronym, was one of the main coordinators of Lula’s campaign and participates in the transition team in the center of government group.

Lula was president of Brazil when Obama took office in the US in January 2009. In April of that year, at a G20 summit, Obama even said that Lula was “the guy” and “the most popular politician on Earth”.

Months later, during a press conference at the White House, Obama returned to praise the Brazilian leader. “President Lula has a very different political orientation from most Americans,” he said. “He came out of the trade union movement and was seen as a strong leftist. He turned out to be a very practical person, who, despite maintaining relationships with the entire political spectrum of Latin America, carried out all kinds of smart market reforms that made Brazil prosper,” said the American at the time.

In an excerpt from the book “Uma Terra Prometida”, released in November 2020, Obama made comments about Lula, stating that he knew of suspicions of corruption in the PT government.

“The Brazilian president, for example, Luiz Inácio Lula da Silva, had visited the Oval Office in March, making a good impression. A grizzled and charming former union leader, with a stint in prison for protesting the military government and elected in 2002, had initiated a series of pragmatic reforms that sent Brazil’s growth rates skyrocketing, expanding its middle class and ensuring housing and education for millions of its poorest citizens,” he wrote.

“It was also said that he had the scruples of a Tammany Hall boss, and rumors circulated of government patronage, backroom dealings and kickbacks running into the billions.” The Tammany Hall cited by Obama is a political organization founded in the late 18th century and associated with corruption and abuse of power in New York, with strong influence in the local branch of the Democratic Party.

From the United States, the transition team hopes to welcome Vice President Kamala Harris or President Joe Biden himself. The White House has not yet confirmed who will represent the country at the ceremony.

This Monday (5), Lula’s team has a meeting with representatives of the Biden government to discuss the date of their trip to the United States. According to the PT, the trip to Washington, if confirmed, should take place after his graduation, scheduled for December 12, in Brasília.

Among the authorities expected to attend the inauguration ceremony is the president of Argentina, Alberto Fernández. The presence of the leader of the neighboring country was informed by the ambassador to Brazil, Daniel Scioli, on Thursday (1st), at the CCBB (Centro Cultural Banco do Brasil) – seat of the transitional government.

The expectation of the government’s transitional office is that 300,000 people will participate in the event. The estimate was updated after the announcement made by the future first lady, Rosângela da Silva, to Janja, of holding a festival on the day of the ceremony. On Wednesday (30), Janja released the list of confirmed artists, including Pabllo Vittar, Fernanda Takai, Valesca Popozuda and Chico César.

The artistic presentations should start at 11:00 am and will be spread across two stages set up on the Esplanada dos Ministérios. The shows must be interrupted around 2 pm, when the beginning of the inauguration is expected. Lula and Janja should parade in an open car, in the presidential Rolls-Royce. The transition team is still evaluating which car will be used by Alckmin and his wife, Lu Alckmin.