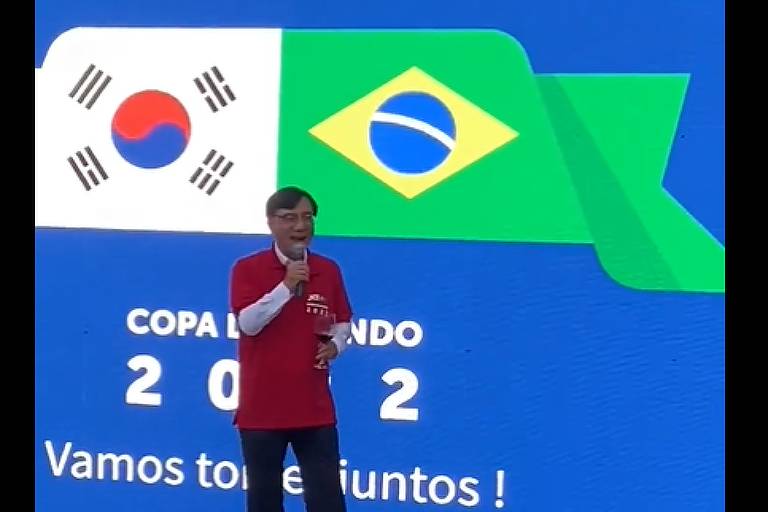 South Korea’s ambassador to Brazil, Lim Ki-mo, says he has already received many invitations to watch the next matches of the Brazilian team in Qatar. “But none of them went to sing”, he says, by message, to the column. “I’m not the type of person who sings without being invited”, he amends, laughing.

On Monday (5), images of the diplomat singing hits from the Brazilian songbook like “Evidências” and “Cheia de Manias” proliferated on social media after Brazil’s rout against the South Korean country.

The performances were presented to around one hundred members of the Korean community, embassy employees and Brazilian friends at their official residence, based at the Republic of Korea embassy, ​​in Brasília. The match was broadcast on a screen set up in the pool area.

“On the day of the game, in the morning, I received some calls asking if I was going to sing. Friends said that if I sang, they would sing too. So I thought: ‘I should sing some songs'”, he says. The ambassador says that his Brazilian guests started to sing and play some instruments, and everything happened very naturally.

Officials at the diplomatic representation, however, say they were surprised by the musical numbers, although Lim Ki-mo has already sung Brazilian songs on other public occasions.

He, who is not fluent in Portuguese, explains his learning method. “If I come across a song that interests me, I listen to it about a hundred times. Only then can I understand the rhythm, the meaning of the words and the feeling it conveys. Then I listen to it a hundred more times and I feel like I can sing.”

The songs presented after the selection game were not chosen at random, he explains. “I’ve heard that ‘Evidências’ is like a second national anthem for Brazilians, so it’s natural for me to choose it. ‘Cheia de Manias’, for foreigners, has a very Brazilian rhythm. Both are songs to my ears” he says.

The ambassador claims to be a recent supporter of social networks, although he is experiencing the repercussions caused by them. The videos began to circulate after a sequence of publications made by journalist André Spigariol, who followed the match from the official residence.

“Actually, I didn’t even have social networks. I didn’t even like it, to tell you the truth. But I joined Instagram about a month ago to keep in touch with the friends I’ve made in Brazil”, explains the diplomat.

Lim Ki-mo says he has heard many encouraging words since arriving in Brazil in 2021 and that he sees culture as a form of reciprocity. “Korean culture is thriving here in Brazil. On the other hand, I hope that Brazilians know that there are people in Korea who, like me, love Brazil too.”