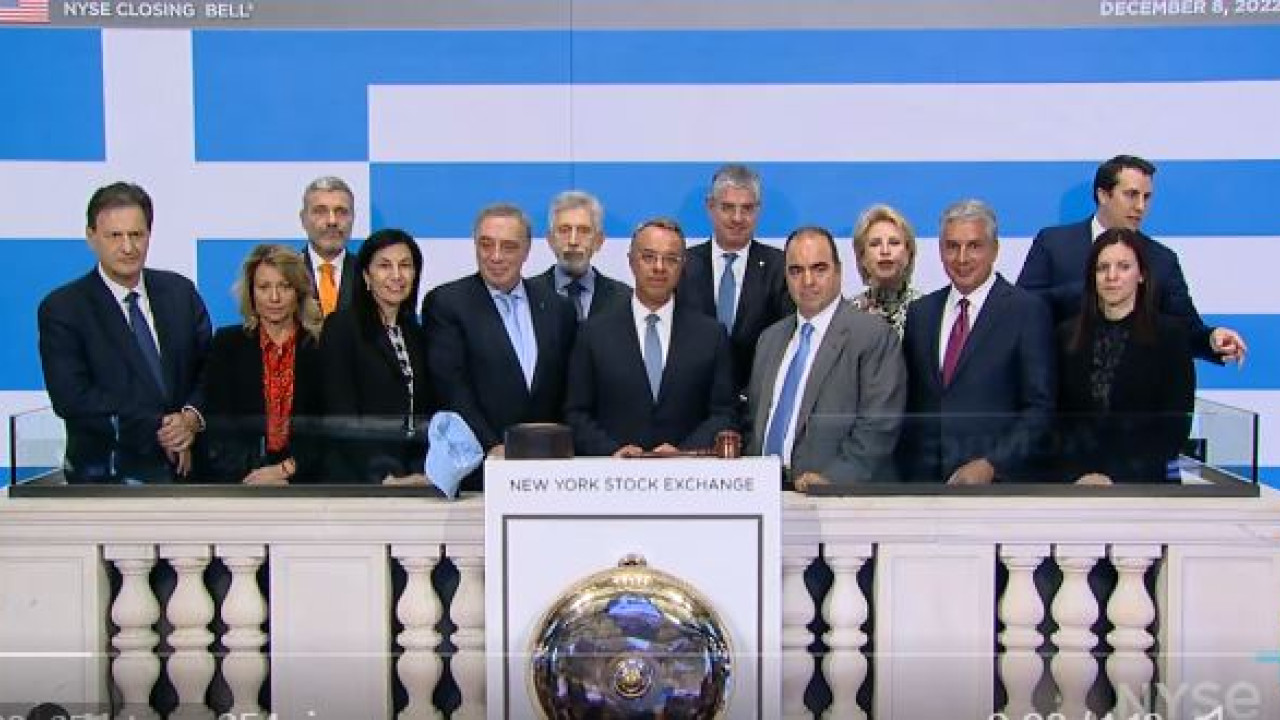 A special ceremony was organized in honor of our country in collaboration with Capital Link in New York.

“Present” was the Minister of Finance, Christos Staikouras, accompanied by other representatives of the Greek mission and business community, who rang the closing bell of the NYSE Stock Exchange.

The ceremony was broadcast live by all the major US international television networks, as it is a top-rated event, watched by an estimated 150 million viewers.

With the presence of the Minister of Finance @cstaikouras the special event in honor of Greece at the New York Stock Exchange as part of @CapitalLink Invest in #Greece Forum pic.twitter.com/6FhjTLJgOF

As Capital Link noted in its announcement, “the active involvement of the New York Stock Exchange, the largest stock exchange in the world, contributes to the promotion and promotion of Greece to a very broad global investment audience. It also shows the constant support of the Stock Exchange in Greece, Greek businesses, Greek shipping and the expatriate community. The American capital market is a very important source of raising capital for a growing number of companies with Greek interests, and the New York Stock Exchange plays a major role in this.”

As part of “Greece-America Day”, the New York Stock Exchange hung the Greek flag on Wall Street and issued special commemorative medals to honor our country. For his part, NYSE Vice President John Tuttle welcomed the Greek delegation and NYSE-listed companies and referred to the long-standing relationship between the New York Stock Exchange, the Greek-American community, and Greece, stressing that the NYSE’s commitment to the Greek diaspora, the shipping and business community of Greece and listed companies remains strong.

This was followed by an exchange of commemorative gifts between the vice president of the NYSE Stock Exchange, the Minister of Finance, Christos Staikouras, the Managing Director of the Athens Stock Exchange Group, Yannos Kontopoulos, and Dr. Nikos Tsakos. For his part, the Minister of Finance referred to the attractiveness of Greece as a business and investment destination, the extroversion of Greek entrepreneurship, as well as the traditionally close cooperation between Greece and the USA.

The Minister of Finance was accompanied by the Deputy Minister of Finance, Theodoros Skylakakis, the Deputy Minister of Development and Investments, Yannis Tsakiris, the Secretary General of Tourism Policy and Development, Olympia Anastasopoulou, the President of the Capital Market Commission, Vasiliki Lazarakou, and the Consul General of Greece in New York. Dinos Konstantinou. Finally, the event was attended by executives from shipping companies and other companies listed on the New York Stock Exchange, as well as representatives of the companies participating in the 24th “Annual Capital Link Invest in Greece Forum” organized on Friday, December 9, 2022 in New York.