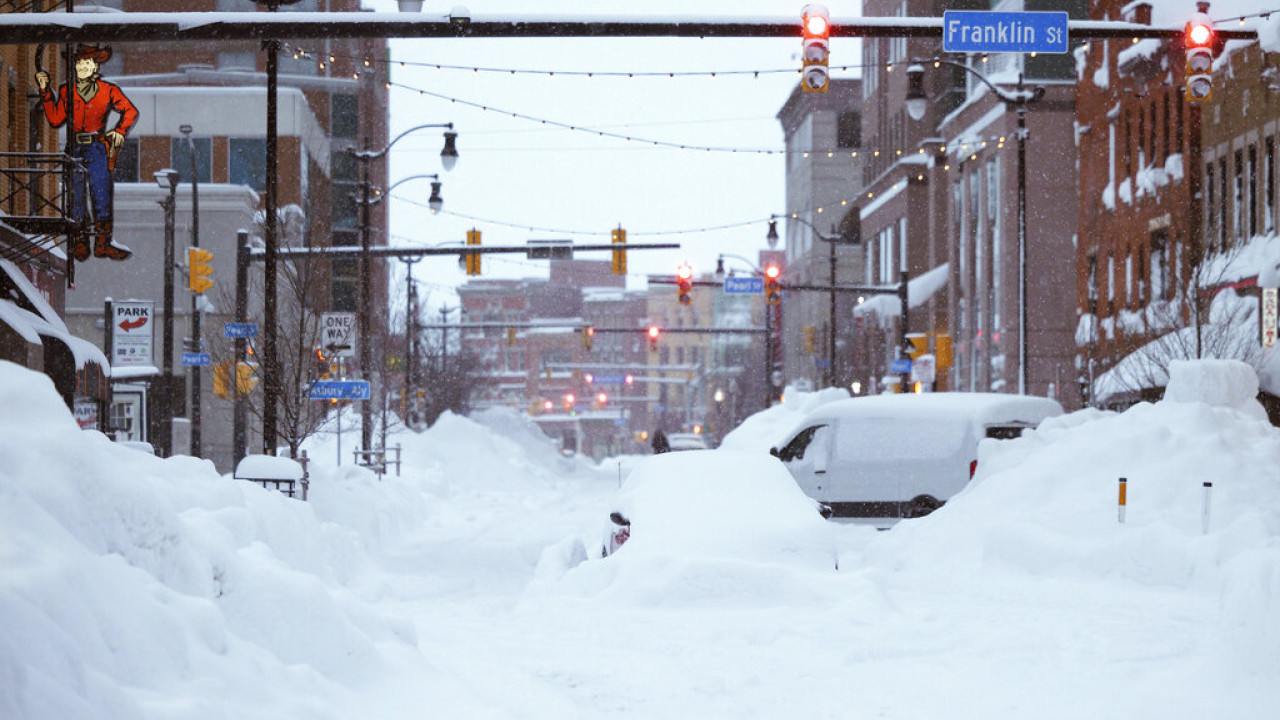 At the mercy of the “blizzard of the century” the USA: Fears of an increase in the dead but also looting

The US is at the mercy of the historic “bomb cyclone” which has so far killed more than 60 people and caused severe power outages while many people were trapped in their cars. The main features of the unprecedented severe weather that stretches from Canada to Mexico are cold temperatures and heavy snowfall with the authorities informing the citizens that the snowfall will continue in the next few hours and the snow is not excluded in some areas even the 30 centimeters. At the same time, according to the BBC, the authorities are also faced with cases of looting.

“The storm is coming back, we’re still expecting 15 to 30 centimeters of snow,” New York Governor Kathy Hotchul warned, noting that some towns in western New York saw up to a foot of snow overnight.

In New York, emergency crews are working feverishly despite the holidays in an effort to save residents from the “blizzard of the century,” as it has been dubbed, with the death toll at 27.

A winter storm has battered #Buffalo, New York, paralyzing the city’s international airport. The frigid storm has claimed the lives of at least 34 across the #USand knocked out power for hundreds of thousands of households.#Newyork #WinterStorm pic.twitter.com/jtna9o1uCM

Authorities say the biggest problem is in Buffalo, with residents facing hours-long power outages and crews going from car to car to free those trapped in their vehicles buried in the snow. At the same time, various crooks in Buffalo took the opportunity to break into stores and grab whatever they could find.

“Looting is back and forth in Buffalo with many taking advantage of empty streets where snowfall and blizzard conditions have made roads impassable,” the BBC points out. A store owner reports that they took things worth 50,000 euros. “They took everything. From toys and electronics to speakers.”

One resident in Buffalo wrote “we’re very low on food, we’re stuck in our house…I started to panic a little when I looked outside and saw more snow.”

Fears of an increase in the dead

Erie County Executive Mark Poloncarz said at a news conference that the county’s death toll will likely surpass that of the 1977 Buffalo blizzard, which killed nearly 30 people. Citing the local medical examiner’s office, Poloncarz said many of the victims died of heart problems while shoveling or out in the snow. Some were found dead in their vehicles.

Severe #Arctic #freeze hits #US with tragic death toll of at least 48, as Buffalo city in state of New York reported to be worst-hit amid blackouts and flight cancellations – stunning images above capture outbreak of snowstorms and icicles across country. pic.twitter.com/XODfIYslv3

There are fears that more dead will be found once the snow starts to melt.

“We expect there will be more” deaths from the ongoing storm, he said.

Also, 10 deaths were confirmed in Ohio, six people were killed in crashes in Missouri, Kansas and Kentucky. Vermont woman dies from falling branch A homeless man died of hypothermia in Colorado and a woman fell into a frozen Wisconsin river and died. Also, four people were killed in Canada after a bus overturned on an icy road in British Columbia.

This is how the #downtown area of ​​the city of #Buffalo was left, in the state of #NewYork, United States. There is snow as far as the eye can see.#WinterStorm #WinterSolstice #US #snowstorm #Snow pic.twitter.com/9zjhZsZ4qI

The National Weather Service forecast up to 12 inches of snow for Monday, on top of the several feet that have already left the city buried in snow, as officials scramble to get emergency services back online.

US President Joe Biden has declared a state of emergency in New York State. “My heart goes out to those who lost loved ones this holiday weekend,” he tweeted.

Over 15,000 flights were cancelled

The severe storm has forced the cancellation of more than 15,000 flights in the US in recent days. At least 4,000 flights were canceled yesterday Monday, according to the tracking website Flightaware.com. Many who had planned to spend the Christmas holidays elsewhere were unable to travel after all.

The extreme weather saw temperatures drop below freezing in all 48 US states over the weekend, including Texas states along the border with Mexico, where some newly arrived migrants are struggling to find shelter. In the western US state of Montana, temperature dropped to -45 degrees Celsius.

In Jackson, Mississippi, city officials announced on Christmas Day that residents should boil their drinking water due to the possibility of pipes freezing and water lines bursting.

Greek Foreign Ministry: We express our deep sorrow for the lives lost

The Greek Ministry of Foreign Affairs expresses its deep sorrow for the loss of life caused by this unprecedented bad weather in a tweet:

“Deeply saddened by the tragic loss of life in the #USA following the severe weather. We express our sincere condolences and deepest sympathies to the families of the victims, the people and the government of our close friend and strategic partner #USA”

Deeply saddened by the tragic loss of lives in the #US following the harsh weather conditions. We extend our sincere condolences & deepest sympathy to the victims’ families, the people & Gov’t of our close friend & strategic partner #US pic.twitter.com/5iJFQuQRqO