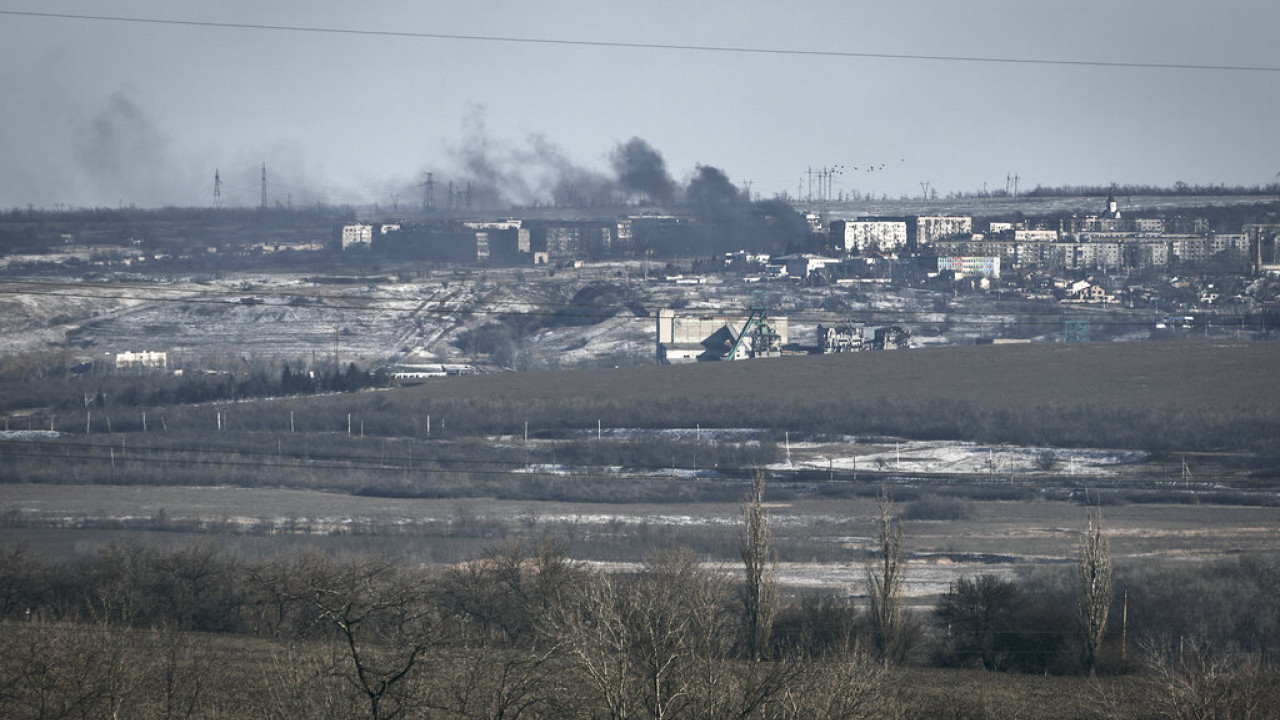 The devastation caused by fighting between Russian and Ukrainian forces fighting for control of the city of Solendar in eastern Ukraine is revealed in satellite images from the US private company Maxar.

The Russians claim they have captured the town of Solentar, the frontline in eastern Ukraine, while Kyiv denies Moscow’s claims and says the region is home to the bloodiest battles of the war. At the same time, the Kremlin is replacing the head of operations in Ukraine, three months after his appointment.

On a battlefield “strewn with corpses”, as Reuters writes, Wagner’s mercenaries are claiming the first major Russian success in half a year. In particular, the Wagner group, led by Putin’s close ally Yevgeny Prigozhin, claims to have captured Solentar after bloody clashes. Moscow did not immediately confirm.

The head of Russia’s Wagner mercenary group, Yevgeny Prigozhin, insisted yesterday that his forces had “completely liberated” the eastern Ukrainian town of Soledar after killing around 500 Ukrainian soldiers in earlier fighting.

“I want to confirm the complete liberation and liquidation of the Solentar region by the forces of the Ukrainian army… The Ukrainian forces that refused to surrender were annihilated,” Prigozhin asserted.

Wagner’s fighters “killed about 500 soldiers. The whole city is filled with dead bodies of Ukrainian soldiers,” he says in the same announcement.

Soledar resists – “The Russians are walking over their own dead bodies”

On the other hand, the Deputy Minister of Defense of Ukraine, Hana Maliar, announced that Russia is indeed increasing its forces on the front, but the Ukrainian forces are resisting.

“Clashes are fierce in the direction of Solentar,” Maliar said. “(The Russians) are walking over their own dead bodies.” “Russia is leading its people to slaughter by the thousands, but we are holding out,” said the deputy minister.

According to Ukrainian media, today alone, in a Ukrainian missile attack, at least 100 Russian soldiers were killed.

More than a hundred Russian soldiers were killed in the battle of Soledar after Ukrainian forces launched a missile at a grouping of troops, the command of Ukraine’s Special Operations Forces said.

Maliar also said the number of Russian military units in Ukraine rose to 280 – up from 250 one week – earlier as Moscow sought to take the “strategic initiative”.

Regarding the risk of launching an attack from Belarus, Russia’s ally in the north of Ukraine, as Ukrainian President Zelensky stated yesterday, Gromov confirmed that it exists and will “continue to exist throughout the year.”

Comparison with earlier images from the town of Solentar shows a school and several farm buildings are among the destroyed structures, while bomb craters mark the landscape and streets around the salt-producing town of Donetsk.

Solendar’s strategic importance is disputed by military analysts, but if Russia manages to gain full control of the city, it would be a symbolic victory for the Kremlin.

Success in that city could help Russia in its attack on the Ukrainian city of Bakhmut, about 10 kilometers (6 miles) to the southwest, giving it a secure position within range of the city.

The town also has salt mines, which could be used to station troops and store equipment, protected from Ukrainian missiles.

Russia’s notoriously brutal Wagner mercenary group has been heavily involved in the battle for the city, with its leader at one point claiming his fighters were in full control and only his troops were involved. However, the Russian Defense Ministry insisted that its forces were involved.

Ukraine’s defense ministry said on Wednesday that heavy fighting was continuing and Wagner forces had had no success in “pushing” Ukrainian defenses.

Images released by Maxar, the US-based space technology company, show how Ukrainian trenches in fields around the city have been targeted by Russian artillery.

The city itself has been devastated by months of fierce fighting, with Russia continuing its offensive there even as its forces have been pushed back elsewhere in Ukraine.

The disaster at Bahamut

The head of the private mercenary company Wagner inspects the 200 km long tunnels of the Solentar salt mines, as proof of his claims that the Russians now control the city.

The Ukrainians insist that Solendar has not fallen and that their forces are still fighting for the city.

“Terrorist state and propagandists are raving that part of the city of Solentar, which has been completely destroyed by the invaders, has fallen to the Russians. However, the fighting continues,” said Ukrainian President Zelensky.

A few kilometers outside Solentar, the CNN correspondent broadcasts with the gunfire in the background not stopping.

Ukrainian authorities are warning the last citizens to leave. The fighting in this area is relentless, with both sides equally reporting hundreds of dead in the enemy ranks.

“What is happening today on the fronts of Bakhmut and Soledar is the bloodiest scenario of the war,” says the Advisor to the President of Ukraine, Mykhailo Podoliak.

The city of Solentar is the last Ukrainian rampart before the Russians reach the strategically important city of Bakhmut, which has been the subject of heavy fighting for months.

“The liberation of the city of Solentar will allow us to liberate Artemovsk (Bakhmut) under favorable conditions,” emphasizes the Head of the Donetsk Russians, Denis Puslin.

The sudden “reshuffle” in the Russian leadership

The looming conquest of Solentar is the first Russian military success in months. The stagnation on the battlefields, together with the criticism of the heavy losses of the Russians from the Ukrainian strikes in Makiivka, seems to have been blamed on Sergei Surovikin. General Armageddon, as he is known, assumed command of the military forces in Ukraine just three months ago. The Russian Ministry of Defense announced that the Chief of the General Staff of the National Defense Valery Gerasimov is appointed head of the troops in Ukraine and Surovikin remains as his deputy.

Because Solenar is of strategic importance

The battle to capture the eastern Ukrainian city of Solentar is one of the bloodiest since the start of Russia’s invasion, with Moscow throwing all its forces there in hopes of a victory after several defeats since September. .

Before the war Solentar was a small town of about 10,000 inhabitants, mainly known for its salt mines. Her name means “the gift of salt” in Ukrainian and Russian.

It is in Donetsk province, which Russia claims it has annexed, about 15 kilometers northeast of Bakhmut, a more important city that has been targeted by the Russian military for several months.

The salt mines of Solentar are the largest in Europe. Moreover, under the old salt mines there is a 200-kilometer long network of tunnels, which passes under the front line and which Russian forces can use to penetrate behind Ukrainian army lines.