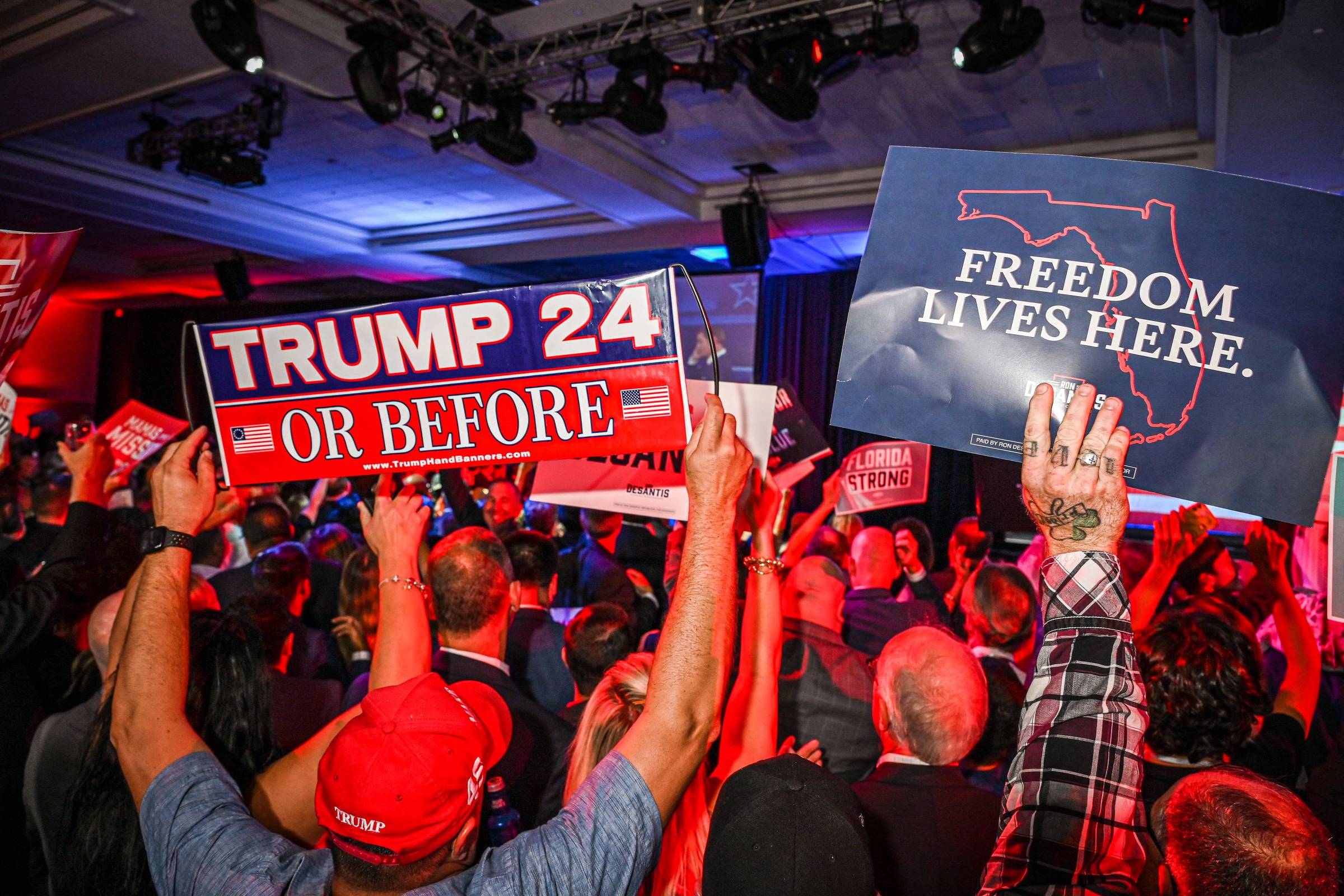 For decades, the cliché in American politics has been that “Democrats fall in love, Republicans fall in line.”

The Democratic Party was seen as a collection of groups with loose connections and fractured interests, often at war with themselves. “I don’t belong to an organized political party,” said Will Rogers famously. “I’m a Democrat.” Republicans were considered the most cohesive political force.

If that was true once, it isn’t anymore. Today, Democrats align and Republicans crumble.

It’s not just about the 14 votes Kevin McCarthy lost before pledging enough of his power and prestige to finally be named Speaker of the House. These are his predecessors, Paul Ryan and John Boehner, who stepped down. Of the Tea Party repeatedly overthrowing deputies. Of Ted Cruz and the Freedom Caucus (freedom caucus) forcing government shutdowns that their peers didn’t want. Of Donald Trump humiliating virtually the entire party establishment and becoming the erratic pivot around which party politics revolves. Of Republicans expelling and isolating Liz Cheney because she insisted on investigating an armed attack on the House they occupy.

Today, a bunch of Republicans don’t form a party. It’s closer to a riot.

Perhaps the rise of small donor money, social media and nationalized politics have eroded party cohesion. But Democrats were also hit by all of this and responded very differently.

Barack Obama beat Hillary Clinton to the race in 2008, but rather than exile the Clintons to the political wasteland, he made Hillary Secretary of State and then endorsed her as his successor. In 2020, the establishment rallied around Joe Biden. When Harry Reid retired from the Senate, he was replaced as leader by his deputy, Chuck Schumer. When Bernie Sanders lost in 2016, he became part of Schumer’s team; when he lost in 2020, he blessed a unity task force with Biden. Nancy Pelosi led the House Party from 2003 to 2022, and the transfer to Hakeem Jeffries was drama-free.

So why has the Republican Party repeatedly turned against itself in a way that the Democrat has not? There isn’t an explanation, so here are three.

Republicans are caught between money and the media

For decades, the Republican Party has been an awkward alliance between 1) donors who want deregulation, corporate tax breaks, and entitlement cuts, and 2) an ethnonationalist base that resents the way the country is diversifying, urbanizing, liberalizing, and secularizing. The party, as an organization, mediates between these two wings, choosing candidates, policies and messages that prevent the coalition from exploding.

Let’s look at funding. Theda Skocpol and Alexander Hertel-Fernandez have documented how money flowed from official party organizations to an “extra-party consortium of conservative donors” centered on the Koch network (which is and has long been far larger than the Kochs themselves). Between 2002 and 2014, the share controlled by campaign committees went from 53% of the money that Skocpol and colleagues were able to track to 30%.

What emerged in their place were groups like Americans for Prosperity, the Heritage Action Network, and the American Legislative Exchange Council, sophisticated and well-funded groups that began to act as a shadow of the party and pushed the Republican agenda even further in the direction of their class desires. corporate.

What were the defining republican economic policies at that time? Privatization of Social Security. Tax cuts for corporations and the rich. Free trade agreements. Repeal of Obamacare. Cut Medicaid. Privatization of Medicare. Deep spending cuts. “The elected Republicans were pursuing agendas that were simply not popular, even among their constituents,” Skocpol, a professor at Harvard, told me.

But what really eroded legitimacy was that attention to the corporate agenda was accompanied by inattention to, and sometimes opposition to, the ethnonationalist agenda. This was particularly true on immigration, where the George W. Bush administration tried, and failed, to pass a major reform bill in 2007. In 2013, a key group of Senate Republicans joined Democrats for another attempt. , but saw the project overthrown by Republican deputies.

There’s a reason why immigration was Trump’s main issue in 2016: It was the point of maximum divergence between the Republican Party elite and its base.

It is worth reviewing the failure of the Bush project in 2007, because it reveals the pincers in which the party was trapped even before the rise of the Tea Party. The revolt against the text was centered on radio programs, capable of channeling the anger of the conservative base into a force capable of turning Republican officeholders against the Republican president.

It wouldn’t be the last time. While the corporate class built the organizations needed to increase its control of politics, the party base built the media ecosystem it needed to control politicians. First came Rush Limbaugh and his imitators, then Fox News (and eventually imitators and competitors), then blogs and digital native outlets like Breitbart and the Daily Wire. The often overlooked secret of this ecosystem is that it is ruthlessly competitive. If you lose touch with what the audience really cares about, you’ll lose them to another show.

“The reason Democrats are so much more supportive of institutions is because they are the institutions,” Matt Continetti, author of “The Right: The Hundred-Year War for American Conservatism,” told me. [a direita: a guerra de cem anos pelo conservadorismo americano]. “Republicans are increasingly the non-college party. When Mitt Romney was nominated as a candidate in 2012, the party was basically split between college and non-college whites. That’s gone. Republicans just lost a lot of college-educated voters — what you thought was the backbone of the legend 40 years ago has just been scrapped.”

The problem with the party as an institution is that it is, in fact, an institution. And so the logic of anti-institutional politics inevitably consumes him as well, particularly when he is in the majority. This was almost comically explicit during the struggle for the presidency of the Chamber. “Break down the establishment once and for all,” wrote Rep. Andy Biggs of Arizona. Colleague Chip Roy said the aim was to “empower [os deputados] to stop the Washington machine from doing what it does”.

The more the anti-establishment wing expresses itself, the more the party loses voters previously loyal and inclined to the institutions and gains voters who distrust them.

When I asked Michael Brendan Dougherty, a writer for the National Review, what the modern Republican Party was, he replied, “It’s not the Democratic Party.” His argument is that there isn’t much that unites the various factions of the Republican coalition, except the opposition to the Democrats.

“The anchor of Democratic politics is guidance toward certain public policy goals,” Sam Rosenfeld, author of “The Polarizers: Postwar Architects of our Partisan Era,” told me. [polarizadores: os arquitetos de nossa era partidária no pós-guerra]. “The conservative movement is more oriented towards anti-liberalism than positive goals, and therefore the issues and struggles they choose to pursue are more plastic. What this ends up doing is giving them permission to open up their movement to extremist influences and make it very hard to police the boundaries.”

We can see that dynamic now. The easiest path to bipartisan cooperation is to frame a bill as anti-China. McCarthy’s first act with any bipartisan support was to create a new committee to focus on competition with China. But Beijing is not a direct enemy like the Soviet Union or Al Qaeda were. It certainly isn’t strong enough to organize GOP policy around a positive agenda.

All this suggests that McCarthy has won a very bad prize. To become president, he traded away many of the powers he would have as president, and more importantly, he proved himself to be weak before he even picked up the hammer. “All McCarthy has is the title on his office door,” Skocpol told me. He is an empty president of an empty party.

Facebook
Twitter
Pinterest
WhatsApp
Previous article
Consumers look for promotions at Americanas, but even the price of Bis disappoints
Next article
Qatargate: Pancheri “nails” Tarabella – “I gave him 20,000 euros in paper bags every two to three months”