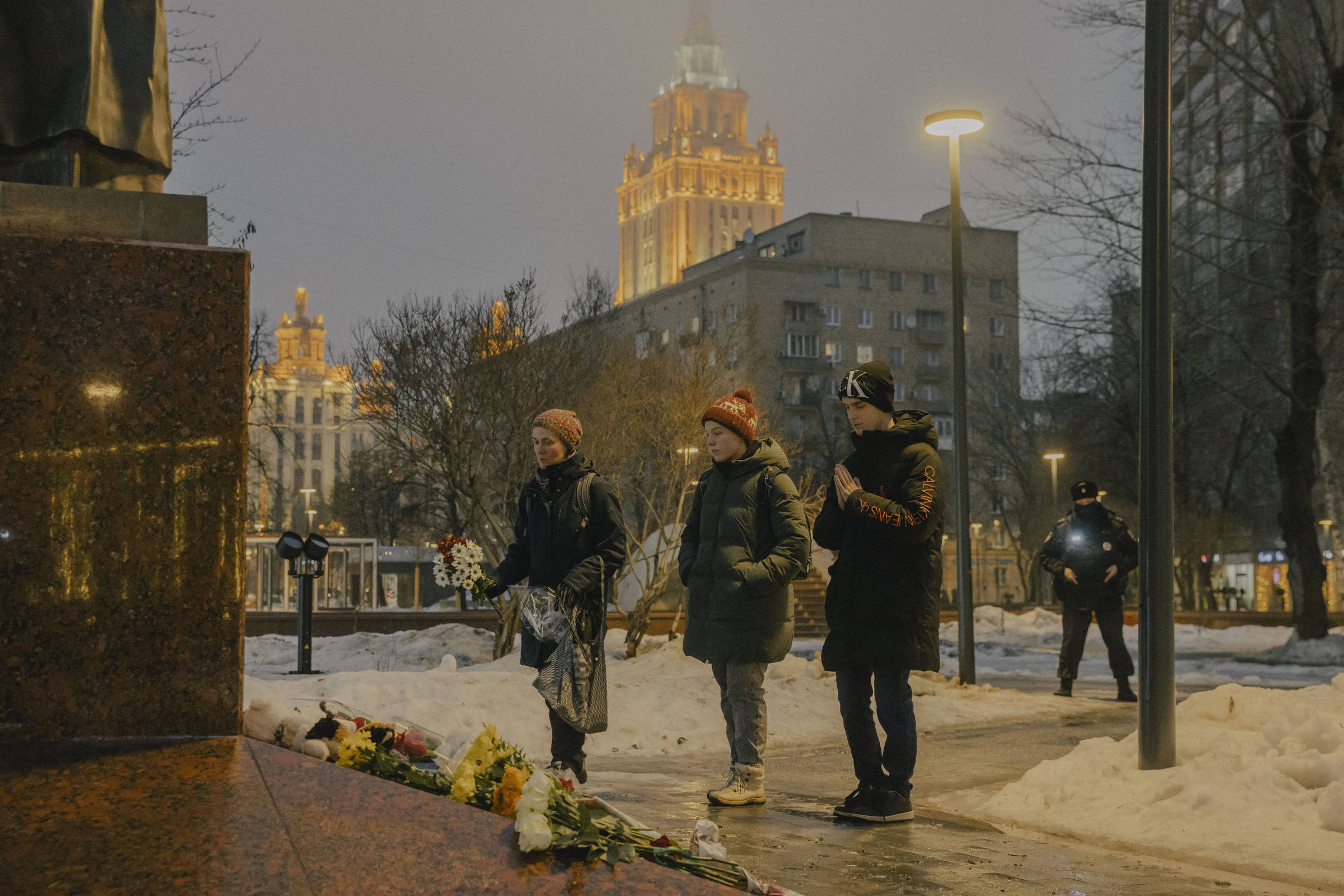 Police buses seem ubiquitous in Moscow since Russia’s invasion of Ukraine. They guard most of the centre, including the statue of one of Ukraine’s most celebrated poets, which has become a favorite spot for a silent display of anti-war sentiment.

Since a Russian missile hit a residential building in Dnipro on the 14th, killing 46 people and wounding 80 others, Muscovites have deposited flowers, stuffed animals and photos of the destroyed building at the foot of the statue of Lesia Ukrainka – the poet and playwright who lived in the last decades of the Russian Empire.

The ritual became an expression of sadness, shame and opposition. But at regular intervals, authorities remove the mementos.

“In contemporary Russia, it’s a silent battle,” says Tatiana Krupina, 28, a chemist who went with a small group of friends to deposit flowers last week. Such gestures are what might pass for a kind of protest in Russia in January 2023, 11 months after the invasion.

The “flower fight” is one of the first large-scale public demonstrations since September, in the days following President Vladimir Putin’s announcement that hundreds of thousands of men would be called up to fight. The country has imposed penalties for anyone who criticizes the war or even calls it a war, so for many this seems like a rare opportunity to voice dissent without being arrested.

For anti-government Russians who remain in the country, the flowers are a reminder that they are not alone in opposing the conflict, even as propaganda grows increasingly aggressive and the letters Z and V, which have become pro-war symbols, are carved into buildings. .

For those who fled because of persecution, possible conscription or refusal to pay taxes that would feed the war machine, the memorial is a sign that there are still people in the country brave enough to protest. “It’s not just a way of showing the people of Ukraine that there are people in Russia who don’t tolerate what’s happening; it shows that they are not alone,” says Alexander Pliuchev, a Russian journalist with a large following on YouTube.

But even the symbolic gesture has potential consequences. At least seven people were arrested, according to a New York Times journalist who witnessed the episodes last week. Four were taken away by the police after placing flowers on the site.

Police tried to stop people from photographing the memorial and told others to delete the images. But they keep coming, looking for a moment when there aren’t too many around the monument — so it doesn’t look like an illegal public gathering — and discreetly placing their flowers.

“I can’t take it anymore; I want to show my opinion,” said lawyer Ekaterina Varenik, 26, on Saturday (21), after depositing a bouquet at the statue. She said she last protested when opposition politician Alexei Navalni was arrested two years ago and stayed home when thousands demonstrated against the war mobilization. “But every day it gets worse, and more and more rigid [a repressão].”

For more than half an hour, Varenik stood in front of the statue with a poster that read “Ukraine: they are not our enemies, they are our brothers”. She was arrested shortly afterwards and faces up to 15 days in jail.

Some prominent Russians played down the protests. “Bringing flowers to a monument doesn’t take courage or money,” said Dmitri L. Bikov, a poet and writer critical of the government who lives in exile, in a debate streamed on YouTube.

“It is aesthetically beautiful, but completely useless,” he added, who was the victim of an attempted poisoning in 2019 with a substance similar to that used in Navalni, according to the Bellingcat website. “There is only one positive effect: maybe someone will find out who Lesia Ukrainka is – a great poet – and read her work.”

The statue has been the scene of altercations with pro-war nationalists, who denounce the protesters and accuse them of discrediting the Russian military – now a crime in the country.

The Kremlin’s crackdown on opposition and acts accelerated after the invasion of Ukraine. Around 20,000 protesters have been detained since the start of the war, according to OVD-Info.

Moscow councilor Ilya Yachin was sentenced to eight and a half years in prison for speaking out about Russian atrocities in Butcha. A 19-year-old student from the city of Arkhangelsk faces up to ten years in prison for posts on social media criticizing the war. In this context, defying the police with flowers may take a certain amount of courage, but it also comes at a mental cost.

“I know that at any moment the police can come into my house and arrest me,” says Maksim Chatalov, 36, a former flight attendant who, he said, was fired for his anti-war stance. He became friends with an inner circle of activists after he was thrown into an “avtozak” (police van) following a protest in April. During the Northern Hemisphere’s summer and autumn, they protested the mobilization, painted anti-war messages around the city with chalk and placed flowers on other memorials.

Chatalov and her friend Anna Saifitdinova, 34, brought bouquets to the statue on a recent evening. She had four white roses—Russians always give an even number of flowers as a tribute to the dead. Chatalov said he plans to leave Russia because he feared arrest.

“I believe that I would be more useful in another country than staying here without a job”, he says. “What am I going to get when I’m sitting in a prison camp? Am I going to be beaten constantly or kept in a cage all the time like Navalni? Or will someone from the Wagner Group come and try to recruit me to fight in Ukraine with threats if I don’t enlist? take me to the point where I kill myself.”

Still, some who risk arrest persist in showing resistance. “Moscow is a huge city, and everyone is quiet,” said Varenik before being stopped by her sign. “I want to show the world that we shouldn’t be silent. We allow all of this with our silence.”

Facebook
Twitter
Pinterest
WhatsApp
Previous article
INSS starts paying pensions with the new minimum wage of R$ 1,302
Next article
Kim Kardashian: Filed a restraining order against a stalker – He called her his wife!