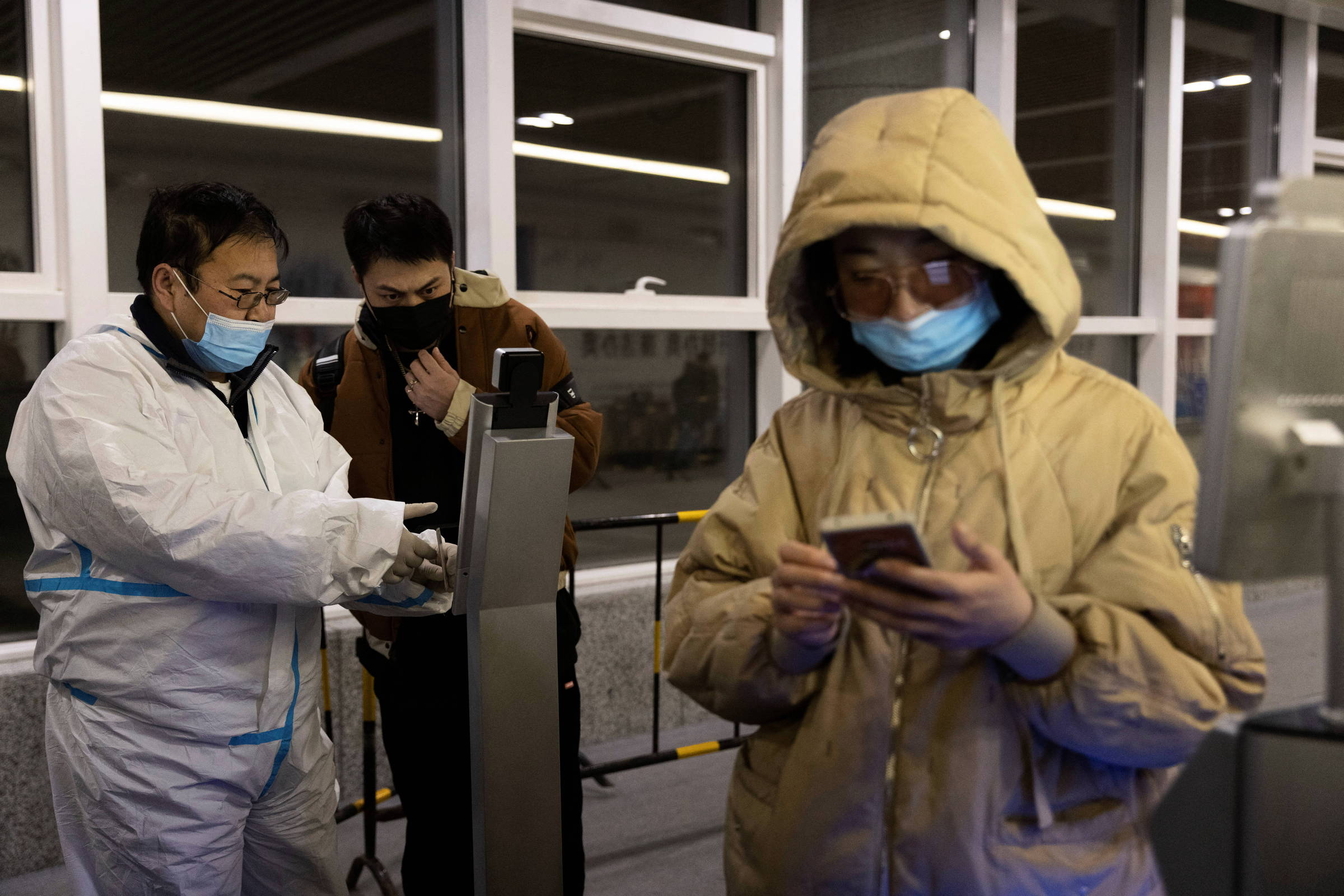 Police ordered human rights lawyer Xie Yang not to travel to Shanghai to visit the mother of a dissident. He went to the airport anyway.

The sign on his health app — a digital pass indicating possible exposure to the coronavirus — was green, there were no Covid cases in his hometown of Changsha, and Xie hadn’t been out for weeks. Then the app turned red, indicating that he would be a high-risk person. Airport security tried to quarantine him, but he resisted.

Xie accused authorities of tampering with his health code to prevent him from traveling. “The Chinese Communist Party has found the best solution to control the population,” Xie said in December. He, who is critical of the government, was arrested in January, accused of inciting subversion and creating trouble.

The pandemic handed leader Xi Jinping on a plate a powerful argument to deepen the party’s interference in the lives of 1.4 billion citizens, putting into practice his vision of the country as a model of safe order, in contrast to the “chaos of the West”. .

In the two years since authorities cordoned off the city of Wuhan in the first pandemic lockdown, the Chinese government has been honing its powers to track people, with the help of technology, armies of community workers and broad public support.

Buoyed by their success in fighting Covid, Chinese authorities are using their enhanced surveillance capabilities to also fight crime, pollution and so-called hostile political forces. This all amounts to a powerful techno-authoritarian tool in Xi’s hands as he intensifies campaigns against corruption and dissent.

The basis of controls is the health code. In cooperation with technology companies, local authorities generate the user’s profile based on their place of residence, travel history, test results and other data. The color of the code determines whether the user is authorized to enter buildings or public spaces, and the use of the app is implemented by legions of employees who have the power to quarantine people or limit their movement.

Controls are critical for China to achieve its goal of completely eradicating the virus on its territory — a strategy the party has staked its credibility on despite the emergence of highly contagious variants. After the initial mistakes that allowed the spread of Sars-CoV-2, the “Covid zero” policy has helped keep the number of cases low in China, while deaths continue to rise in the US and elsewhere.

But Chinese authorities have acted harshly, at times even isolating children from their parents. City officials did not respond to questions about Xie’s complaint. Although it is difficult to know what happens in individual cases, the regime itself has already indicated that it wants to use these technologies for other purposes.

Health monitoring now helps to locate fugitives: some were tracked by their health code, and others, who avoided using the app, faced so many difficulties in everyday life that they ended up surrendering.

For all its apparent sophistication, the surveillance system is still labor intensive. And while the public has generally supported Beijing’s meddling in the pandemic, privacy concerns have been mounting.

‘A vicious circle is born’

A concentration of Covid cases in east China’s Zhejiang province late last year began with a funeral. When one of those present, a healthcare professional, was diagnosed positive on a routine test, 100 triggers sprang into action.

In a matter of hours, authorities had already alerted colleagues in Hangzhou, 70 km away, of the presence of a potential carrier of the coronavirus in the city. Government officials tracked him down and tested him — and he too received a positive diagnosis.

Using digital data from the health apps, teams mapped a network of people to be tested, based on where the man had been: a restaurant, a majong parlor, card parlors. In two weeks they managed to stop the chain of infections in Hangzhou, where 29 people were found to have been infected.

The ability to track these outbreaks largely depends on the health code. Before the pandemic, China already had a huge ability to track people with cell phone location data, but today this monitoring is much broader.

In recent months, authorities in several cities have broadened the definition of close contact to include people whose cell signal was detected within half a mile of an infected person.

Xi praised the so-called “brain of Huangzhou” center, describing it as a model for how China can use technology to tackle social problems. The entity centralizes data on traffic, economic activity, hospital use and public complaints.

Since 2019, the city has also been using street cameras to check if citizens are wearing masks. One district monitored residential electrical consumption to see if residents were complying with quarantine orders. Luoyang Prefecture installed sensors on the doors of those who were confined to notify authorities if they were opened.

Chen Yun, an academic at Fudan University in Shanghai, wrote that with the focus on technology and surveillance, authorities may be missing out on other ways to protect people’s lives — such as increasing popular participation in public health programs. The risk, she said, is that “a vicious circle will emerge: people are becoming more and more marginalized, while technology and power are increasingly pervasive.”

For more than a decade the Communist Party has bolstered its armies of grassroots agents who carry out door-to-door surveillance. The new digital apparatus has boosted this form of control. According to state media, the country has mobilized 4.5 million agents to fight the pandemic — one in every 250 adults.

In normal times, these workers’ duties included weeding, mediating disputes and keeping an eye out for potential troublemakers, but the mission has multiplied with the pandemic.

Agents began to have to watch housing projects and register the identity of everyone who entered them; calling to see if residents had been tested and vaccinated; help people in lockdown take out their trash. And they were given powerful new tools.

The central government instructed the police and internet and telephone companies to share with community workers the displacement history of residents so they could decide if someone was considered high risk.

In one county in Sichuan province, the ranks of base agents have tripled over the course of the pandemic, reaching more than 300, according to Pan Xiyu, 26, one of the new hires. Responsible for 2,000 residents, she says she spends much of her time distributing leaflets and setting up loudspeakers to explain new measures and encourage vaccination. “I have to be on call 24 hours a day.”

And the pressure to smother Covid outbreaks can cause overzealousness, prompting officials to prioritize adherence to standards, whatever the cost.

During the lockdown in Xi’an, hospitals refused care for an eight-month pregnant woman because her Covid test result had expired hours earlier. She lost the baby, in an incident that provoked widespread public fury. But some people attributed the episode to pressure on low-level officials to stamp out infections.

“In their view, it’s always better to go too far than compromise, it’s the pressure created by the current environment,” says Li Naitang, a retired agent from Xi’an.

Even so, proponents of strict measures consider the results to be undeniable. China has recorded just 3.3 coronavirus deaths per million citizens, while in the US it is around 2,600. After the record of zero new cases, Xi’an lifted the lockdown last week.

‘You will never be lost’

The regime’s success in limiting infections has given the strategy something not seen in many other countries: broad popular support. Pan says her job is easier now than it was at the beginning of the pandemic, when people often argued when told they had to wear a mask or scan their health code.

The authorities openly defend the use of virus control measures for purposes not linked to the pandemic. In the southern region of Guangxi, a judge noted that the count of local residents made by the base agents “was more complete than the census” and came up with the idea of ​​having these professionals locate people who could not be found; 18 subpoenas were delivered.

Municipalities across China assure their residents that their health code data will not be used for other purposes. The central government also announced regulations promising data privacy. But many Chinese assume that authorities can access whatever information they want, regardless of the rules.

Zan Aizong, a former journalist based in Hangzhou, says that increased surveillance will make it even easier for authorities to crack down on the activities of dissidents. He himself refuses to use the health code, but that means getting around is complicated.

“[Em postos de controle] I can’t tell the truth — that I’m resisting the health code because I’m against surveillance,” he says. “If I mentioned resistance, they’d think it was absurd.”

Facebook
Twitter
Pinterest
WhatsApp
Previous article
The cycle of fan violence: The attack in N. Krini until the cold-blooded murder of a 19-year-old (video)
Next article
Kapravelos – SKAI: 800 employees in Papanikolaou without 3rd installment – I expect a new wave of COVID