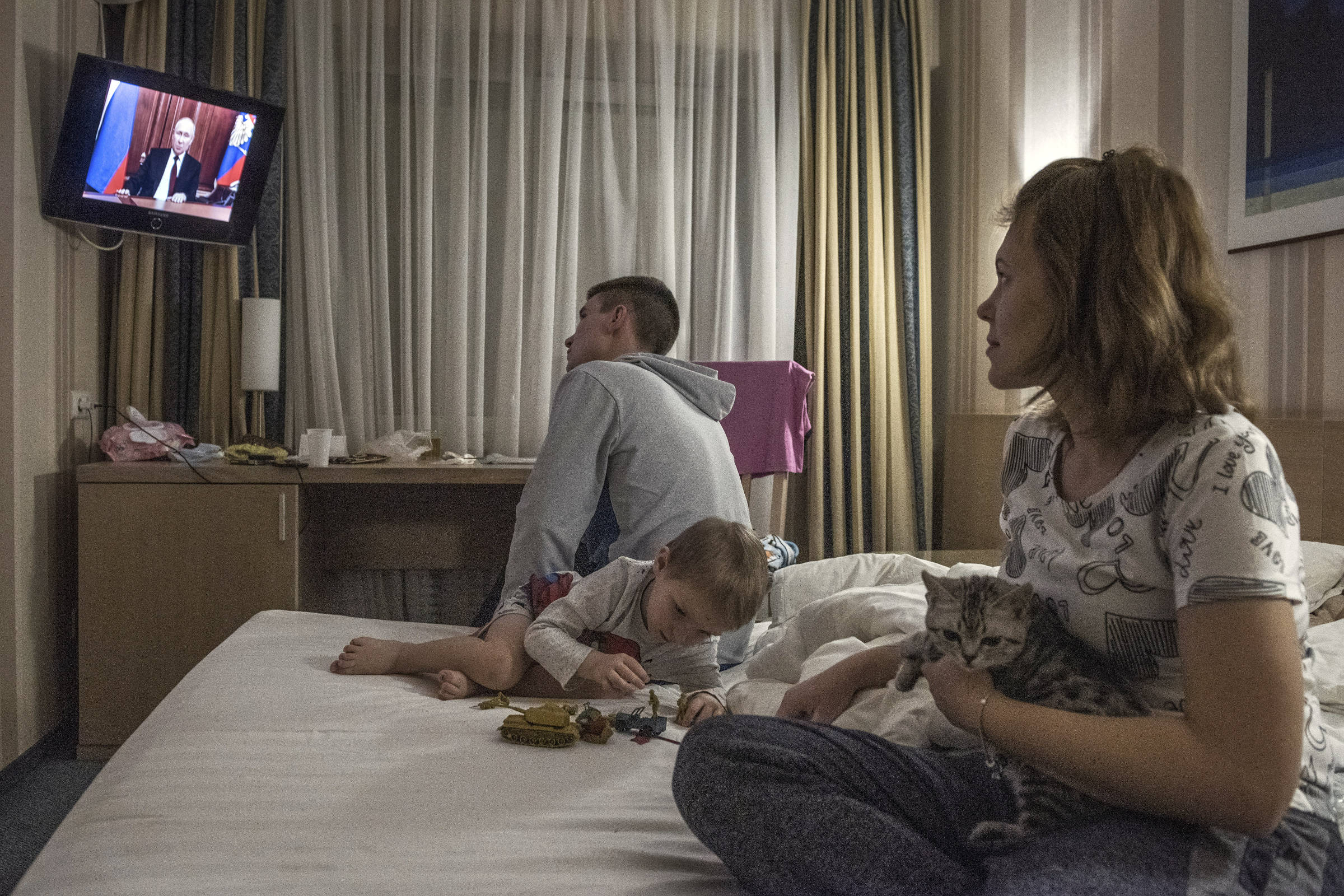 Leaning back in his chair, his red tie askew, his speech staccato, Russian President Vladimir Putin delivered a speech on Monday that sounded like a call to war.

It was also the culmination of an avalanche of propaganda orchestrated by state media in recent days — a clear demonstration of how the Kremlin can use its dominance of the airwaves and TV to lay the groundwork for a political decision that could cause widespread suffering.

On Tuesday, the Russian stock market tumbled, leaving it about 20% lower in a week, as companies braced for damaging new Western sanctions. And the potential, far more tragic costs if Putin went ahead with an invasion of Ukraine still seemed incalculable.

For millions of Russians watching TV, however, the narrative of the last few days was completely different: bursts and flashes of artillery fire. Blurred images of human remains. Women and children crying and running away. An appeal by separatists to the president. An emergency Security Council meeting. A dramatic speech to the nation. And what will happen now is a mystery.

For months, while Washington has been warning of an imminent Russian invasion of Ukraine, the Kremlin’s powerful propaganda machine has denied and mocked the war speech.

Then, last weekend, everything changed. From the occupied territory of Ukraine to the halls of the Kremlin, the explanation for a possible invasion was assembled, piece by piece, and presented to the Russian public in an ongoing effort on state television.

On Tuesday morning, the first newscast on Channel 1 announced a “historic moment”.

“Eight years of fear are over,” the presenter declared, referring to residents of separatist-occupied eastern Ukraine, who, in the Kremlin’s baseless claims, are the target of “genocide” by Ukrainian forces.

It was still too early to know how the Russians would react to Putin’s measures, but there was not the widespread jubilation that accompanied the annexation of Crimea in 2014. While state media claimed that Ukraine was shooting at pro-Russian separatist regions, whose independence Putin acknowledged , it remained unclear how far the Kremlin would go.

“Hundreds and soon tens of thousands of Ukrainian and Russian citizens could die because of Putin,” Alexei Navalni, an imprisoned opposition leader, posted on social media. “Certainly he will not let Ukraine develop and drag it into a swamp, but Russia will pay the same price.”

Lawmakers in the lower house of parliament, the Duma, have suggested that the Kremlin’s campaign against the pro-Western government of Ukrainian President Volodymyr Zelensky would not end with recognition of breakaway territories in the Donbass region.

Nationalist MP Andrei Lugovoi said he hoped the recognition would mark “the beginning of the return of the whole of Ukraine to its historic bosom”. Another, Sergei Mironov, attacked Zelensky as a “coward, liar and bandit”.

The tone was a continuation of the barrage of reports purporting to paint Ukraine as the aggressor — though Kiev insists it has no plans to mount an offensive against separatists — and the US and its allies as bellicose.

On the country’s main weekly news program on Sunday, presenter Dmitri Kiseliov quoted the leaders he insisted could benefit from a war: Britain’s Boris Johnson, France’s Emmanuel Macron and Turkey’s Recep Tayyip Erdogan. “It’s all very serious,” he warned. “Ukraine is literally being dragged into war with Russia.”

Later, on the program “Moscow. Kremlin. Putin”, the president’s spokesman, Dmitry Peskov, reinforced the idea that if war was coming, it was not Russia’s option. “The country throughout its history has never attacked anyone,” he said.

On Monday, the media carried allegations of a growing attack by Ukrainian forces and a series of baseless claims — that Ukraine was bombing communications antennas, bridges, a water station. Russian TV reported from Donetsk that Kiev had sent saboteurs.

On presenter Vladimir Solovyov’s YouTube channel, a reporter in separatist territory described the death of a resident by Ukrainian cannon fire. “There is a genocide going on.”

Ukrainian officials insisted that it was separatists who were attacking their own territory. Others warned that Russia was waging a furious war of disinformation.

Recordings of women and children fleeing breakaway territories were impressive. On state TV, a reporter described government psychologists mobilizing to support refugees. “I’d like to say hi to my dad,” one boy said in the video.

The spectacle seemed destined to legitimize Putin’s fateful decision, projecting his decision-making as deliberate and determined — refuting critics who saw the president as more isolated than ever.

On Monday afternoon, Putin gathered officials at the Kremlin, chairing the unscheduled televised meeting of his Security Council. Because of Covid, he sat at his white table with gold edges, while the others occupied chairs arranged in front of him.

“I’d like to point out that I haven’t discussed anything in advance with any of you,” he said, midway through the meeting, heightening the suspense like a reality show. “What’s happening now is happening on a blank page.”

Some looked nervous, others made thinly veiled calls for a full-scale military offensive. Putin repeatedly interrupted his head of international intelligence, Sergei Narishkin, who appeared to be mistaken about whether or not to recognize the rebels’ independence, causing him to stammer and say he was in favor of annexing the territories. “That’s not what we’re talking about,” the president snapped.

Until recently, it seemed that many Russians had turned away from the idea of ​​an impending conflict.

On Sunday (20), a handful of activists started anti-war protests in Pushkin Square in central Moscow — all were arrested. One of them, Lev Ponomarev, a human rights activist, insists that for now many cannot imagine a war, but most would be against it if it actually happened. “It will be the collapse of that regime,” he said on Monday.

Analysis: Earthquake in Turkey and Syria completes endless calamities in the region