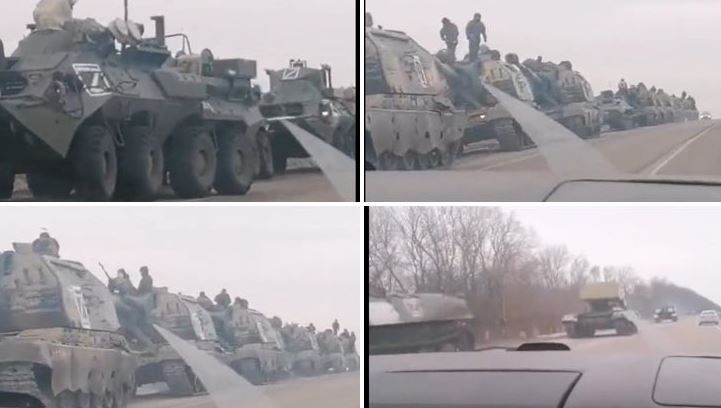 Answers to what the letter “Z” may mean, painted in a white square on Russian tanks, fuel trucks and refueling vehicles on the Ukrainian border, are being sought by twitter users, with the international press “decrypting” it. ».

However, so far there is no official answer, only speculation.

According to the Sun, this is another ominous sign of the impending war, as it is understood that the vehicles bear this badge, to stand out from their rivals, as soon as “the action begins”.

I wonder if the “Z” is big enough. https://t.co/jRXDKYBi9n pic.twitter.com/8XO7JvEGiK

According to a Kiev military source, quoted by the Sun, the letter “Z” may indicate that final preparations have been completed.

“It’s vital that any attacking force can be seen, especially from the air, where Russian forces are in complete control. “Ukrainians have similar tanks and vehicles to reduce the risk of friendly fire,” the source said.

He added that it was now “widely understood” that Vladimir Putin had already decided to launch a bloody and disastrous invasion.

The same article emphasizes that the “marking” of tanks, as well as vehicles, reflects the tactics of the United Kingdom and the United States in the First Gulf War, when the Allied invading forces sent to liberate Kuwait marked their mark. an overturned gallon.

The Sun points out that the military equipment marked “G” is located between 6 and 25 miles from the border, as a fighting force of more than 200,000 troops surrounded Ukraine in the north, south and east.

Another theory, allegedly derived from “mercenaries” of the Wagner group – a Russian paramilitary organization whose members have been involved in numerous conflicts – suggests that the “Z” means Zelensky, the Ukrainian president, Russia’s main enemy. .

According to an article in the International Business Times, another theory states that the “G” represents the “point of no return”.

Some do not believe that this sign can indicate the vehicles that have been assigned to specific roles or even the formation of a new battle unit.

It is noted, however, that the letter “G” does not exist in the Cyrillic alphabet of Russia.

I wonder if the “Z” is big enough. https://t.co/jRXDKYBi9n pic.twitter.com/8XO7JvEGiK

Facebook
Twitter
Pinterest
WhatsApp
Previous article
Survivor-Athena Evmorfiadi: I had cancer twice-The first time I was 25 years old
Next article
Putin says he accepts to negotiate, but that his interests are non-negotiable