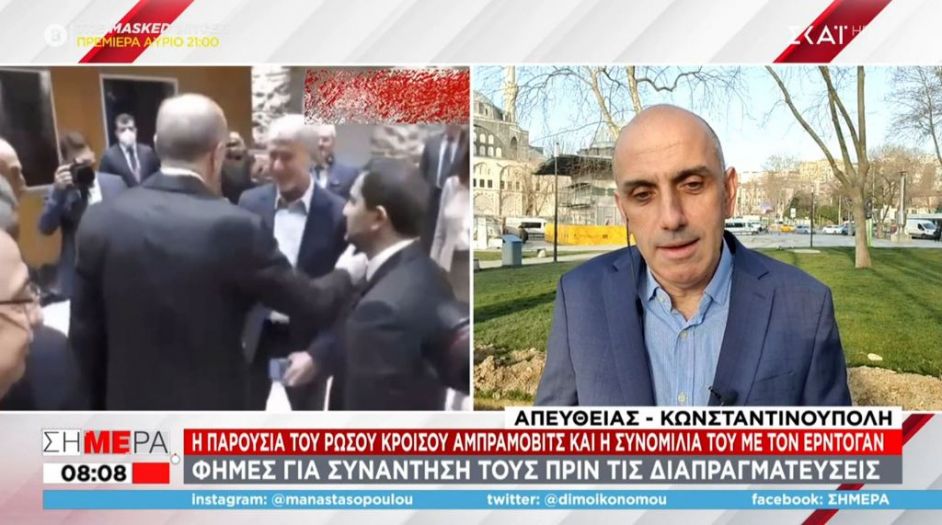 The short four that he had did not go unnoticed Turkish President Tayyip Erdogan by Russian oligarch Roman Abramovichshortly before the start of negotiations in Istanbul among the envoys Russia and Ukraine.

“From here we expect good news,” Erdogan told Abramovic and slapped friendly on the arm.

The Russian billionaire seems to be quite cramped and rather embarrassed and affirms to the Turkish President.

According to unconfirmed reports, Erdogan and Abramovic had a private meeting early Tuesday morningbefore the start of negotiations.

SKAI’s correspondent in Turkey Manolis Kostidisexplained that Abramovich, did not represent in the negotiations only the Russian side, but mainly the Russia business world losing too much money from the invasion and war in Ukraine and the sanctions imposed.

Abramovich has been reportedly coming and going for a month Russia and Moscowwhile it has in Turkey his own boatsas the country does not impose sanctions on Russian oligarchs.

Facebook
Twitter
Pinterest
WhatsApp
Previous article
Barrels in SKAI for the thriller of Patras: No confession or clear cause of death is needed to prosecute
Next article
NYT: Vladimir Putin – The construction of a dictator