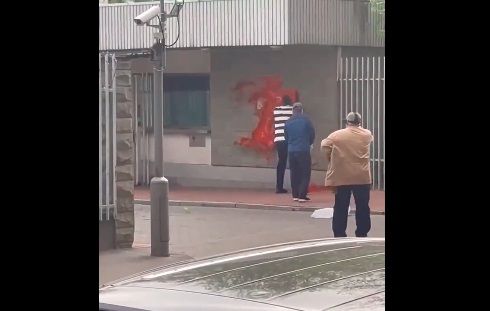 Revenge for the Russian ambassador: They threw red paint at the Polish embassy in Moscow – Video

In retaliation against Poland, unknown people proceeded, after the red paint received by the Russian ambassador in Warsaw Sergei Andreev.

A video posted on social media shows three people approaching the Russian embassy and throwing paint at the sign and elsewhere. There is no guard at the spot.

MbEmbassy of #Poland in #Moscow doused with red paint. pic.twitter.com/vh987QwgXf

The head of the Polish diplomatic delegation in Moscow was summoned to the Russian Foreign Ministry after the attack against him Russian ambassador with red paint in Warsaw, the Polish Foreign Minister announced earlier.

“We know that the Polish ambassador to Moscow has been summoned to the Russian Foreign Ministry,” he said. Zbigniu Rao according to the Russian agency TASS.

Rowe added that he did not intend to prejudge the situation. “The principle of reciprocity always applies in international relations,” he stressed.

On the day of her anniversary Victory Day of the USSR against Nazi Germany, the ambassador of Moscow in Warsaw was attacked while trying to lay a wreath in memory of Soviet soldiers.

The crowd threw red paint at him and his entourage and shouted slogans, according to a video by the Russian RIA.

The Russian Ministry of Foreign Affairs expressed strong protest to the Polish authorities for the attack, demanding that the Polish side immediately arrange a wreath-laying ceremony and ensure its complete safety from any kind of provocation.

The Polish Foreign Ministry said that the attack on the Russian ambassador was condemnable and should not have happened because diplomats from all countries are under special protection.