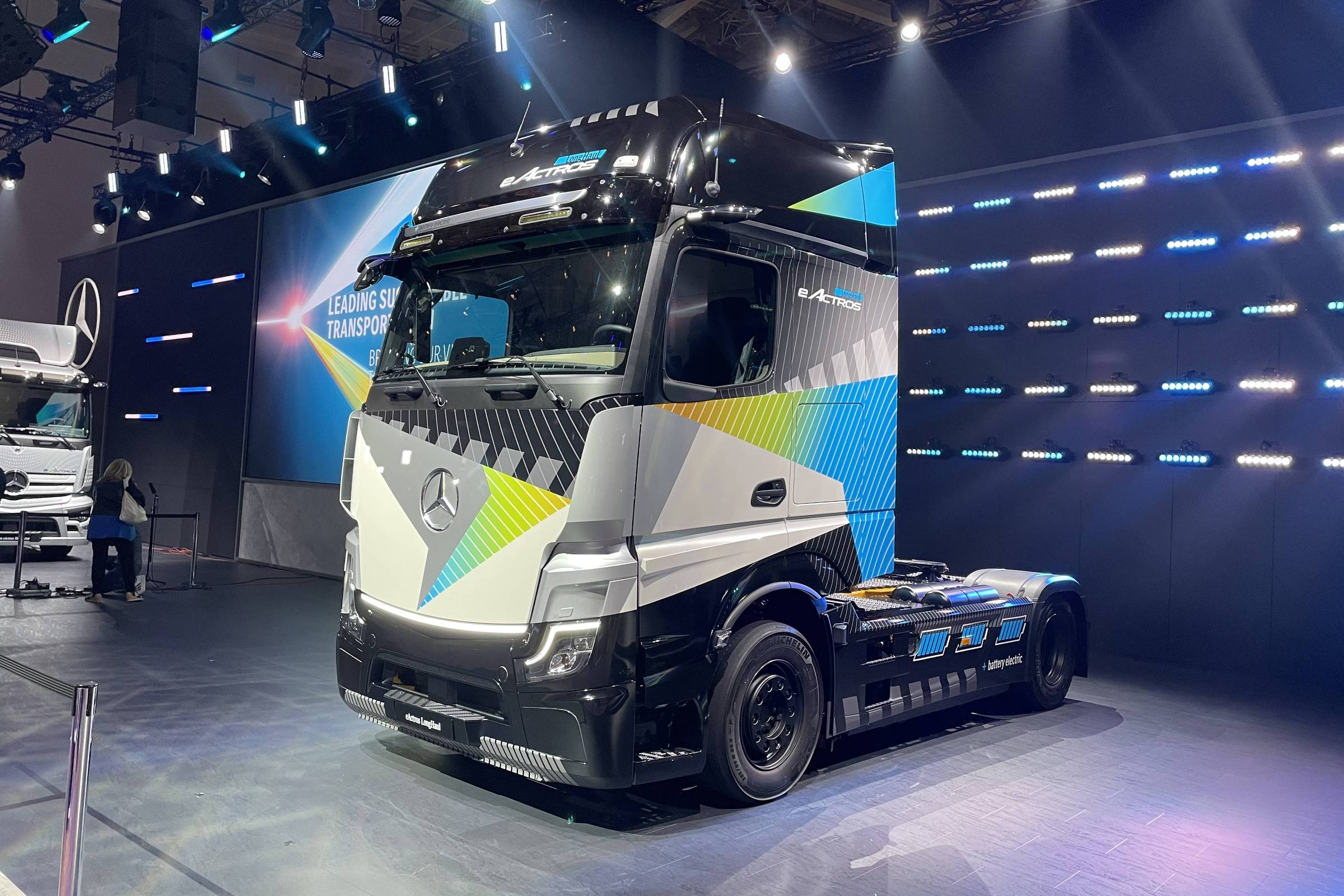 Daimler Truck will enter the high-range electric truck market. The Mercedes e-Actros Long Haul is being presented at the Hannover Motor Show in Germany. It is the largest transport fair in the world.

The event, which takes place again after the cancellation of the 2020 edition due to the Covid-19 pandemic, will be open to the public between the 20th and 25th of September.

The brand’s new model has the capacity to transport 42 tons (including its weight). The range is up to 500 kilometers, according to the company. The start of production is scheduled for 2024.

In comparison, the e-Actros available today have a lower payload capacity and can travel up to 300 km.

The automaker claims that the Long Haul’s batteries can go from 20% to 80% charge in 30 minutes, as long as the truck is plugged into high-powered chargers.

The charging network is being established through a partnership between the Daimler Truck, Traton (Volkswagen and Scania) and Volvo groups.

Mercedes’ electric truck was already designed to use this type of energy, having a unique platform. Batteries are spread across the chassis to make the most of charging space.

The problem lies in the weight of the set of accumulators, estimated at two tons. To get around this problem, the company tries to change the maximum weight limits transported in Europe.

In addition to the e-Actros, the Daimler Truck group presents hydrogen-powered trucks, as well as the compact e-Canter model, which bears the Mitsubishi brand.

This entire strategy goes through the process of de-verticalization of the company, which begins to use more components from suppliers, instead of concentrating all the manufacturing steps.

This movement, combined with accumulated losses in the light vehicle sector, resulted in a wave of layoffs in Brazil, with 3,600 cuts in São Bernardo do Campo (Greater São Paulo).

Since February of this year, the company has been renamed Mercedes-Benz Group AG (formerly Daimler Group AG). The truck unit was renamed Daimler Truck – an independent company, listed on the Frankfurt Stock Exchange.

Scania reinforces its bet on gas from renewable sources to move its trucks. The Swedish company presents the evolution of its 13-liter biomethane engines at the Hannover Motor Show.

The new options can have 420 hp or 460 hp of power, with a focus on road freight transport. The manufacturer claims that the use of this technology reduces CO2 emissions by 90% when considering the well-to-wheel cycle.

This method calculates the carbon footprint from the generation of the fuel to what is emitted by the vehicle in motion.

Biomethane can be obtained by processing waste in landfills or from waste generated on farms.

The supply occurs in the same way as vehicles powered by CNG (vehicle natural gas), which has a fossil origin.

Scania already sold gas trucks in Brazil. The new generation of engines should increase the efficiency of freight vehicles, allowing for greater autonomy.

The automaker also exhibits electric models for urban use. The proposal is in the offer of services such as garbage collection and intercity transport of goods.

The journalist traveled at the invitation of Anfavea