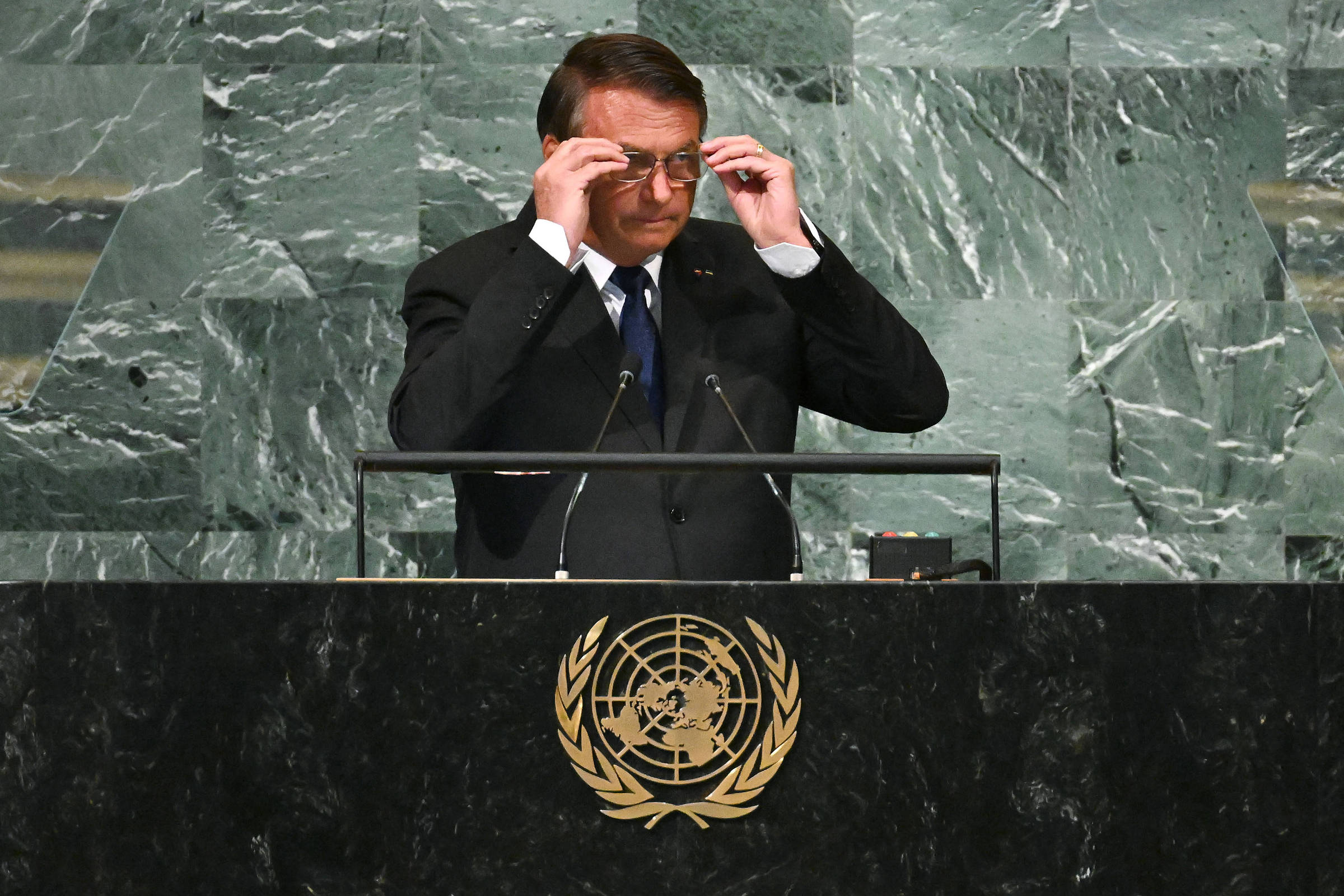 Brazilian economy is doing as well as Bolsonaro said at the UN?

In his speech at the UN General Assembly (United Nations) this Tuesday (20), President Jair Bolsonaro (PL) said that Brazil reached the end of 2022 “with an economy in full recovery”.

“We have high employment and low inflation. The economy has started to grow again. Poverty has increased worldwide under the impact of the pandemic. In Brazil, it has already started to fall sharply”, said the Brazilian head of state in Nova York.

Bolsonaro also cited “an unprecedented deflation in Brazil in the months of July and August” and a 30% drop in the price of gasoline since June.

But, after all, is the Brazilian economy really doing as well as the president said?

In terms of economic performance, Brazilian GDP (Gross Domestic Product) grew by 1.2% in the second quarter of 2022 compared to the previous quarter, above economists’ expectations, which were for a rise of 0.9%.

In the annual comparison, the increase in GDP was 3.2%, according to the IBGE at the beginning of the month. With this result in the second quarter, Brazil occupies the 7th place in a ranking of 26 countries, according to a survey prepared by the risk rating agency Austin Rating.

In terms of future forecasts, the International Monetary Fund (IMF) forecasts growth of 1.7% for Brazilian GDP in the whole of 2022, according to July data.

This cut puts Brazil in 16th position among the G20 countries, in terms of growth projection.

In terms of future forecasts, the International Monetary Fund (IMF) forecasts growth of 1.7% for Brazilian GDP in the whole of 2022, according to July data.

This cut puts Brazil in 16th position among the 19 countries of the G20 in terms of growth projection, behind nations such as Argentina and Turkey.

In his speech, Bolsonaro said that since June, the price of gasoline has fallen by more than 30%. “Today, a liter in Brazil costs around US$0.90,” he said.

According to ANP data, the average resale price of regular gasoline in Brazil in the week of September 11 to 19 was R$ 4.97.

Considering this Tuesday’s dollar exchange rate, the average liter of fuel sold at Brazilian gas stations would be US$ 0.96.

Also according to information released by the ANP, the average price of regular gasoline has been falling for 12 consecutive weeks.

Gasoline had its peak in the last week of June this year, when it registered an average of R$ 7.39 at the pumps. If we take this date into account up to the last ANP survey, the accumulated drop reaches 32.7%.

In other speeches, Bolsonaro also stated that Brazil has “one of the cheapest gasoline in the world”.

According to the ranking of 168 countries prepared weekly by the consultancy Global Petrol Prices, Brazil currently has the 34th cheapest gasoline.

The company considers the average value of a liter of gasoline in dollars and compared the most recent data for all countries as of September 12.

For comparison, the country where the fuel is currently lowest is Venezuela, at US$0.022, and the highest is Hong Kong, at US$2.967.

Global Petrol Prices explains that the differences between the values ​​of a liter of gasoline in the different nations in its ranking are due to various types of taxes and subsidies for the fuel.

Pedro Rodrigues, managing partner of the CBIE (Brazilian Infrastructure Center), explains that the variables that most strongly influence the price of gasoline in Brazil today are the price of a barrel of oil on the international market and the exchange rate, since the commodity is quoted in dollars.

But in addition to prices on the international market, there are other factors that can influence fuel prices, albeit in a more subtle way.

According to Rodrigues, it is worth mentioning the taxes — such as PIS/Cofins and ICM — and the percentage of blending of ethanol in gasoline.

It is precisely the tax policy of the Brazilian government, added to the appreciation of the real against the dollar, which is causing the price to fall more in Brazil than in other countries.

“In addition to having the drop in the global price of oil, Brazil applied a policy that further reduced the tax rate, also reducing the final price of fuel. That’s why, in percentage terms, the price here dropped more than in other countries.” countries”, explains the managing partner of the CBIE.

On Sunday night (18), during his visit to London for the funeral of Queen Elizabeth II, the Brazilian president also compared the price of gasoline in Brazil with that of the United Kingdom.

In front of a gas station in the British capital, which sold a liter of gasoline for 1.61 pounds (equivalent to about R$9.70), Bolsonaro said that the value was “practically twice the average of many states in Brazil.” “.

However, the president’s speech does not take into account the differences in income of the population between the two countries – and therefore how long a citizen would have to work to fill up his car.

In the UK the minimum wage is £9.50 an hour. Considering the price of gasoline at £1.61 per litre, as indicated by the sign of the station in front of which Bolsonaro made the video, a British citizen on minimum wage would have to work the equivalent of 10 minutes to buy a liter of gasoline.

In Brazil, the minimum wage is R$1,212 per month, or R$5.51 per hour. Considering the average price of gasoline at R$ 4.97 per liter, an average Brazilian citizen would have to work the equivalent of 54 minutes, that is, almost six times more than a British citizen to pay for the same liter of fuel.

The president also cited a 5 percentage point drop in unemployment, “reaching 9.1%, a rate not seen for 7 years.”

The unemployment rate in Brazil dropped to 9.1% in the quarter ended in July, according to the Brazilian Institute of Geography and Statistics (IBGE).

It is the lowest index in the series since the quarter ended in December 2015, when it was also 9.1%.

The lack of work still hits 9.9 million people, the lowest level since the quarter ended in January 2016.

The data are part of the Continuous National Household Sample Survey (Pnad).

The drop in unemployment, however, is driven by informality, which affects 39.3 million workers in the country.

The number of employees without a formal contract in the private sector hit a record in the historical series and reached 13.1 million people, an increase of 4.8% in relation to the quarter ended in April.

On inflation, Jair Bolsonaro said that there was a reduction in the rate, “with an estimate of 6% this year”.

“I am pleased to announce that we had unprecedented deflation in Brazil in the months of July and August,” he added.

In the monthly variation from June to July, Brazil registered a deflation of 0.68% in the IPCA (Broad Consumer Price Index), according to the IBGE. In the variation from July to August, the fall was 0.36%.

In the 12-month period, inflation stood at 8.73% in August, making Brazil return to single-digit inflation after successive increases, which had not occurred since September 2021.

In the eight months of this year until August, the accumulated high is 4.39%.

Usually, a deflation happens when the economy is slowing down. But, in the case of Brazil, the drops have been driven mainly by the exemptions on inputs such as fuel and electricity, approved in June in Congress, in addition to lower oil prices on the international market.

The estimate of 6% inflation for the year 2022 cited by the president was released by the Central Bank in the Focus bulletin this Monday (19). Financial market economists lowered the forecast from the latest figures released on August 26, when the estimate was 6.40%.

Compared to the other G20 countries, a group that brings together the largest economies in the world, Brazil’s accumulated inflation in the last 12 months is the 4th largest in the group, according to data from the beginning of September from the OECD (Organization for Economic Cooperation and Development ).

The OECD survey, however, does not consider the figures released on September 9 by the IBGE and uses the accumulated inflation up to July of 10.07% as a basis.

However, even with the most recent data, Brazil would still be in 4th position, ahead of Mexico, which according to the OECD has accumulated 8.7% up to September 6th.