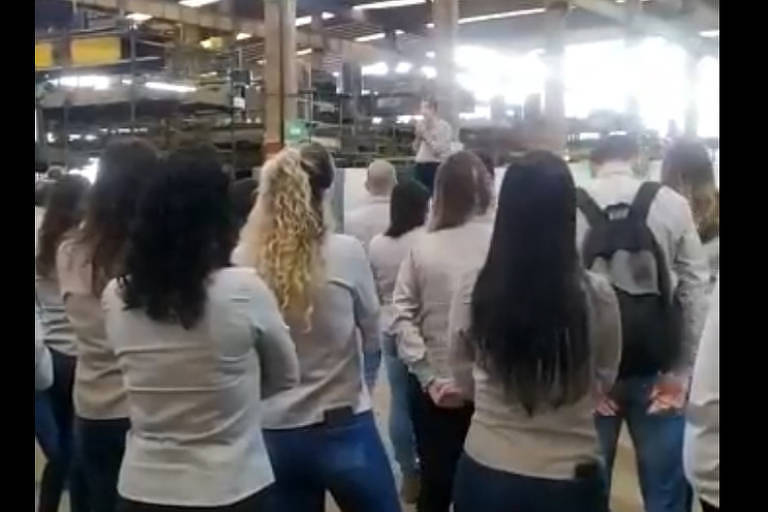 The MPT (Ministry of Labor) in Espírito Santo launched a civil inquiry this Monday (26) to investigate the practice of electoral harassment at the company Imetame, in Aracruz (ES), a municipality about 85 kilometers from Vitória.

In a video sent to the regional prosecutor’s office, a man, whom the MPT identifies as the employer, tells an audience made up of employees that, depending on who they choose in this year’s elections, “they won’t be able to complain” if they find themselves out of a job. .

The Imetame group operates in the metal-mechanics, energy, ornamental stones and oil and gas segments (the company is one of those that won areas in the 2020 Petrobras auction).

In a statement, the company says that the capture of images was not authorized and that it understands that there was no indication of a candidate.

“The only request was for people to have serenity when choosing their candidates. We always respect the individual positions and opinions of each one”, says the company.

The man does not mention the name of President Jair Bolsonaro (PL), who is seeking re-election, nor that of former President Luiz Inácio Lula da Silva (PT), who leads polls of voting intentions. However, he argues that business improved when the current government took over.

“We went four years or so without having a major project in Brazil. You all know that,” he says. “When the government changed, we never stopped, thank God.”

He also talks about the expectation of getting the works of a railroad, which has the potential to generate thousands of jobs. “We’ll make it, but we’ll make it if we vote for the right people.”

For the Public Ministry of Labor, the statements constitute electoral harassment, and the body does not rule out initiating a public civil action against the company to, according to the prosecutor, repair the “immeasurable damage caused by the employer and its conduct.”

Labor attorney Marcos Mauro Rodrigues Buzato sent the company a notification in which he recommends that it immediately stop “threatening, embarrassing or guiding” direct or indirect employees.

In the notification, Buzato says that the company must disclose the content of the recommendation to all its employees within 48 hours and must retract for having provided the orientation. The Labor MP wants the company to inform employees that voting is free and to apologize.

Coercion or harassment to influence the vote can be framed in article 301 of the Electoral Code. The legislation provides for a penalty of up to four years of imprisonment and payment of a fine for anyone who “uses violence or serious threats to coerce someone to vote, or not to vote, for a particular candidate or party.”

Regional labor attorney Adriane Reis de Araújo, from Coordigualdade (coordination for the promotion of equality at work) says that any attempt to break the right to free and confidential voting can be considered electoral harassment.

In addition to threats, she claims that making promises of benefits or advantages to someone seeking a job also constitutes interference or an attempt to manipulate them.

Forcing an employee to wear a candidate’s T-shirt or encouraging other employers to promote layoffs depending on the type of election their employees choose are examples, according to the prosecutor, of conduct of “abuse of directive power” by the company.

In August, the PGT (Procuradoria Geral do Trabalho) issued a recommendation to employers to refrain from making promises, threats or guidelines related to the election period. For the prosecutor, the measure took effect. “Some people are not clear about the limits of the employment contract.”

A few days ago, the MPT in Bahia closed an agreement with a rural producer who had recorded and released a video urging farmers to conduct a survey of “who will vote for Lula” and “fire without pity”. The TAC (conduct adjustment term) avoided filing a lawsuit.

With the agreement, the businesswoman released a video in which she retracts, apologizes and claims that electoral harassment is a crime. She will also fund a campaign for free voting on radio stations in western Bahia.

In another case, the Labor Court in Tocantins granted emergency relief (provisional and early decision) to determine that rancher Cyro Fagundes de Toledo Júnior ceases to make any kind of promise of benefit in exchange for a vote. He could be fined R$100,000 if he fails to comply.

In a video that circulated on social media in early August, the businessman, known as Nelore Cyro, told employees he would pay more salaries if Jair Bolsonaro wins the presidential election.

To the Panel column, from the Sheet, he said he understood that it was not about buying votes. “We are all electoral corporals. Here on the farm we are Bolsonaro’s corporals. Let’s vote for him. But that was more of a joke. [o bônus], but I will not give money to politicians, I will give money to my employees if Bolsonaro wins. That’s all,” he said at the time.

Complaints can be made to the MPT and the unions

The Ombudsman of the Public Ministry of Labor is currently concentrating the complaints of electoral harassment. The agency cannot say how many complaints were registered, as the system does not segment what type of harassment the worker is denouncing, it only says whether it is moral or sexual.