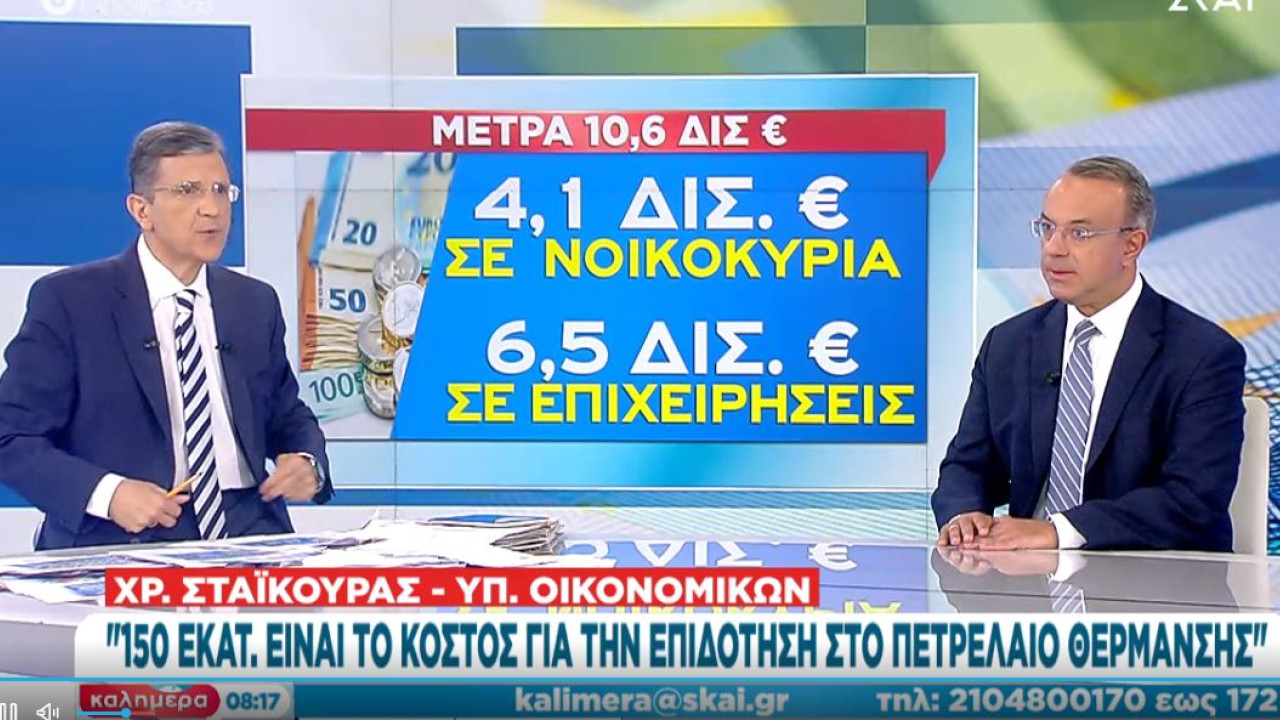 Staikouras in SKAI: The increase in pensions to 7% from 2023 – It concerns 1.5 million pensioners

Mr. Staikouras added that another million pensioners will benefit and see an increase from the abolition of the emergency levy.

The estimate is that the increase in pensions from 2023 will reach 7% and will concern 1.5 million pensioners, it will be 7%, said Finance Minister Christos Staikouras speaking on the Kalimera show and Giorgos Avtias on SKAI.

The minister noted that the cost to the budget will reach 830 million euros.

Mr. Staikouras added that another million pensioners will benefit and see an increase from the abolition of the emergency levy.

In total, he said, the cost of pension increases will reach 1.1 billion euros and will be a permanent improvement from 2023.

For accuracy check amounting to 250 euros, Mr. Staikouras said that it will be given in December and will cost 500 million euros, half of which will concern low-income pensioners.

For heating oil said that the amount of the subsidy will reach 150 million euros, while the heating subsidy will also be given and even with expanded criteria, so some will benefit twice.

He also noted that the government will be able to subsidize electricity until August 2023, explaining that 2/3 of electricity aid goes to businesses.

Mr. Staikouras emphasized that Europe must realize that they need horizontal and common decisions on the price of natural gas and the creation of a reserve for all states with the aim of relieving households and businesses.

For minimum wage he said that the goal is to have a third increase, and this should be done from May.

For cheap housing he said the government had a holistic approach to helping young people, with eight proposals ranging from student accommodation to home loans. Some of these measures have already been legislated, such as the student allowance, and others will be legislated in the near future.

The loan arrangement is estimated to be ready in early 2023, the government is in discussions with the banking system.

For cash reserves of the country Mr. Staikouras said that they reach 38 billion euros and that the country can cover its financial needs for two years, without going to the markets.

This does not happen in any other country in Europe, said the finance minister.

Regarding the cash reserves left by SYRIZA, he said that they came from general government bodies and from the surpluses of the overtaxation of citizens and because they were in the European Stability Mechanism they could not be used.

We have reduced taxes and continue to reduce them and we can support society, Mr. Staikouras pointed out.

He also said that from 2023 there will start to be small primary surpluses.

He added that the country would collect 300-400 million euros from the taxation of refineries, if the proposal is adopted.