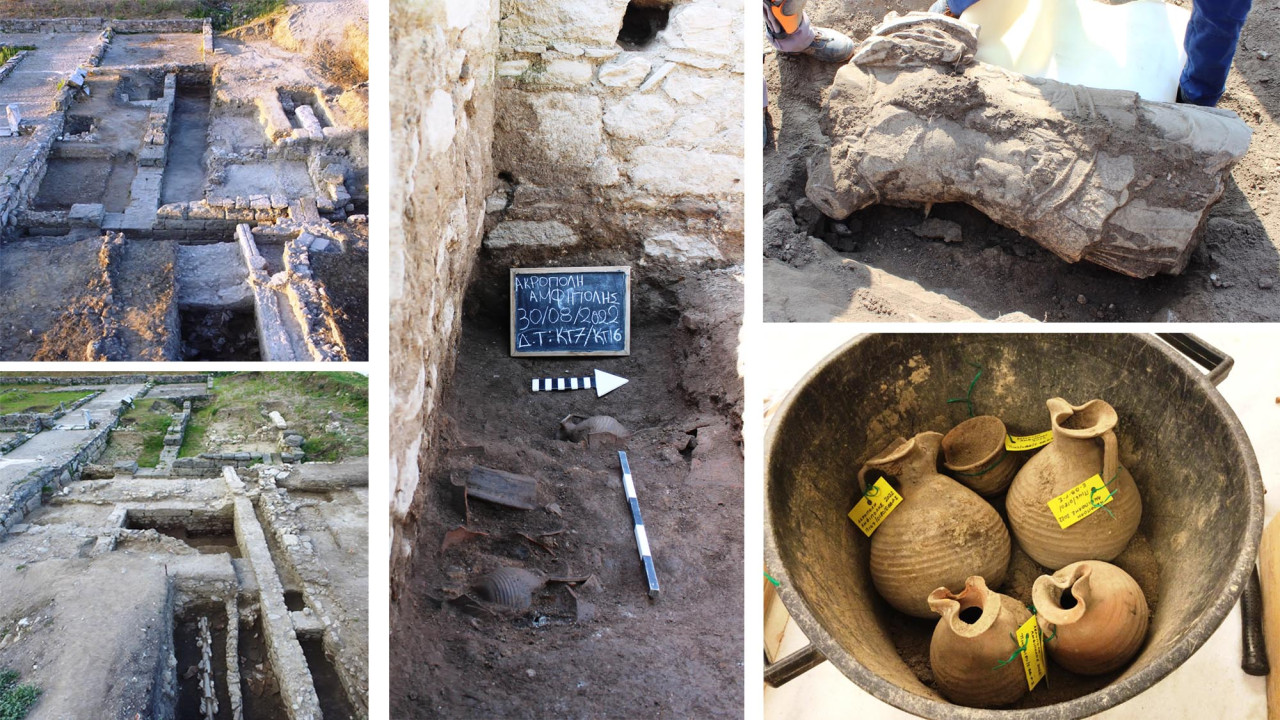 Kavala: The citadel of ancient Amphipolis continues to reveal its “secrets”

During last year’s excavation season, archaeologists brought to light a new sculpture of a pectoral torso, attributed to a Roman officer or even an emperor

Year after year, the citadel of ancient Amphipolis reveals its “secrets”, giving the opportunity to archaeologists and historians to obtain important information and knowledge about this famous ancient city, which as the facts show (discovery of the burial monument in the mound Casta) still has a lot to reveal to us.

It is no coincidence, moreover, that during last year’s excavation period, which was completed in August 2021, archaeologists brought to light a new cuirass torso sculpture, attributed to a Roman officer or even an emperor. The impressive sculpture was found embedded in a Byzantine-era wall, in an area covered by the rubble of earlier excavations. The chest is decorated in relief, where in the center of the motif there is a trophy of victory, to the right and above a winged victory, a captive bound in pistachons and other figures, among which is a figure of the mythical Hercules.

This year’s fourth excavation period, which was completed at the end of August 2022, brought the archaeologists even closer to their goal, which is to investigate the pre-Christian building phases in the acropolis of Amphipolis, since the founding of the city in 437 BC. and so on, for which archaeological knowledge is scarce.

The five-year excavation program in the acropolis of ancient Amphipolis is implemented in the context of the cooperation between the Ephorate of Antiquities of Serres and the University of Patras, under the direction of the head of the Ephorate Dr. Dimitrias Malamidou and the professor of classical archeology Dimitris Damascus. Today, the acropolis is dominated by the precinct and the five early Byzantine churches, from the 5th and 6th centuries AD, monuments that have come to light thanks to earlier excavations under the auspices of the “En Athens Archaeological Society”.

What did this year’s excavation bring to light?

What was brought to light by the archaeological dig during this year’s excavation season was presented during an event organized at the seat of the municipality of Pangaio, Eleftheroupolis. Mrs. Malamidou presented the main elements of the topography of Amphipolis, as well as the points where the excavation is being carried out, while the professor of the University of Patras, Dimitris Damascos, originally from Eleftheroupoli, presented the findings of the excavation in detail.

As the two scientists pointed out, during the event, this year’s excavation focused on uncovering the Roman building with walls of rough stones, optical bricks and strong lime plaster, which is located west of the narthex of the adjacent Early Byzantine Basilica III.

So far, the image of an oblong building 4.50m wide and at least 8.5m long, has not yet been fully revealed as it continues northwards outside the excavated area. On the inner sides of the walls there are four-sided holes, probably for the placement of beams. Beneath the layer of fallen roof tiles, iron fittings suggestive of a door or hatch were revealed.

The part of the destruction layer, where excavation took place this year, contained a number of intact vessels, which date back to the 2nd and 3rd centuries. A.D. These are storage vessels and large amphorae, but also smaller everyday table vessels, pots, plates and prochos (vessels – jugs with large bellies), all carefully placed along the south wall. It is characteristic that some trefoil-mouthed springs were saved intact.

According to the archaeologists, the building probably stopped being used in the early Byzantine years, when a pipe for the drainage of water from the narthex of the adjacent Basilica destroyed part of it. The excavation of the building, whose character – public or private – has not yet been clarified, will continue in the next excavation period.

When did Octavian Augustus pass through Amphipolis?

Professor Dimitris Damascos, during the event, made a special reference to last year’s impressive find of the elaborately sculpted pectoral torso, which is now in the process of conservation in the laboratory of the Amphipolis museum, in order to be exhibited at some point. This trunk is almost identical to another, found in an earlier excavation, embedded in the Byzantine tower of Marmaris in Amphipolis, with a common relief decoration, which identifies the figure with the emperor Augustus.

Mr. Damascus underlined that the representations carried by the chest of the sculpture found last year date back to the end of the 1st century BC, i.e. the time of the first Roman emperor Octavian Augustus, who before ascending to the throne, passed through the area of Amphipolis, leader of the Roman troops in the battle of Philippi (42 BC), against the murderers of Julius Caesar, Brutus and Cassius. He also pointed out that Octavian Augustus was honored by the Amphipolitans at the end of the 1st century BC, for reasons that have not yet been investigated.

In closing, he emphatically noted that he would very much like the torso bust from the sculpture to belong to Octavian Augustus, as is most likely, however so far this has not been fully established.