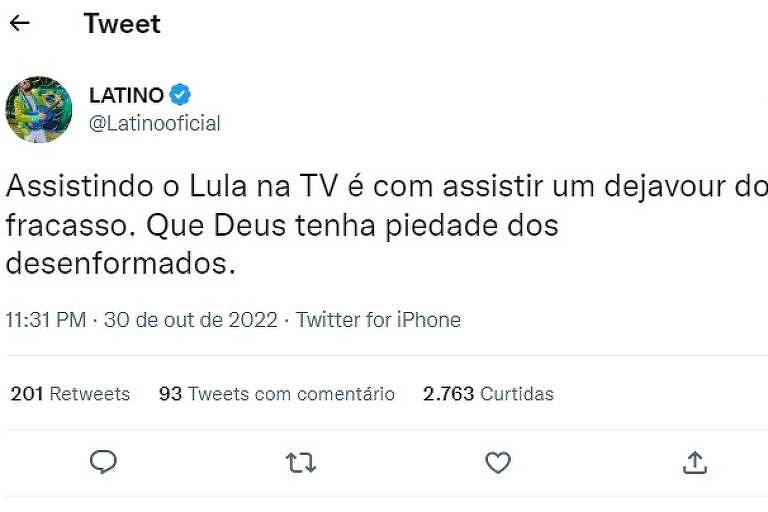 Fervent voter of Jair Bolsonaro (PL), the Latin singer lamented the defeat and referred to Lula (PT) voters as “disinformed” (sic). Due to the Portuguese mistake in the sentence in which he asks for more information, it ended up becoming a joke on the social network.

“Even because the right thing would be uninformed. Nobody here is cake,” posted a follower. “I don’t understand. Did you try to communicate?”, asked another. “I feel this way when your song plays on the radio,” opined a third. “First, learn to write. Go read, it’s better. Second: accept the results of the polls. Democracy prevailed”, demanded another internet user.

On Sunday night (30), after the announcement of Bolsonaro’s defeat at the polls, Latino had already published an image of the flag in black and white, with the word mourning and the phrase “in my country crime pays”. “No words,” he added.

More famous reacted to the election result. Roger Moreira, from Ultraje a Rigor, was one of those who didn’t like the result. “Look, I’m not sad because Bolsonaro lost, but because Lula won,” he said. “We already know how the thief rules, but this time it could be even worse. Let’s impeach (sic) the clumsy and his minions. Before the damage is even greater.”

Another who didn’t seem happy was the comedian Mauricio Meirelles. “The good news: Bolsonaro will leave. The bad news: Lula will enter,” he wrote. Some of the most staunch supporters of the current president, such as Gusttavo Lima, Regina Duarte and Cássia Kis, had not expressed themselves until the last update of this text.

Facebook
Twitter
Pinterest
WhatsApp
Previous article
‘This is not the time to stop Brazil’, says one of the leaders of the 2018 truck drivers’ strike; watch video
Next article
“It’s not me in the videos” claims the 40-year-old who allegedly trampled the kitten to death in Thessaloniki