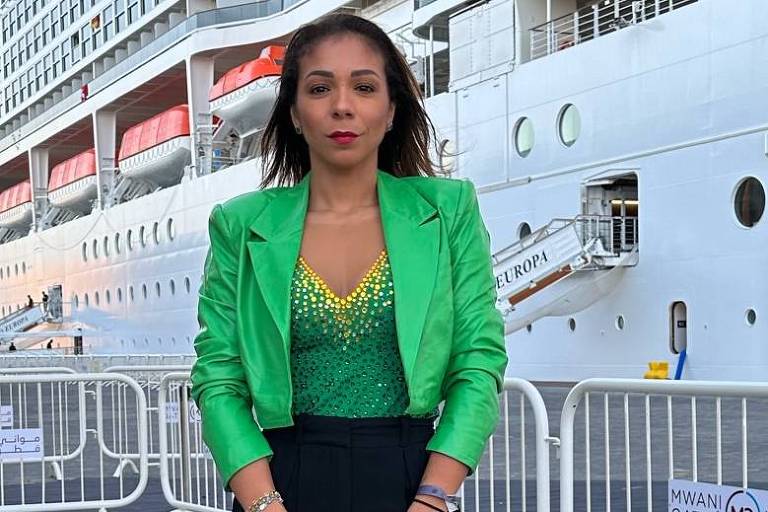 Married for 18 years to Thiago Silva, captain of the Brazilian national team, Belle Silva is with her two children in Qatar following the World Cup. Normal. The family is always together. Isago, 12 years old, and Iago, 9 years old, go to see their father play whenever they can, and Belle (Isabelle, on the birth certificate) and Thiago don’t let go of each other.

The two talk to each other several times a day even when the player is concentrated. “Whoever wakes up first already calls the other. Before going to sleep, we talk too”, tells the businesswoman to F5. At 35, Belle points to Thiago Silva as the most jealous of the relationship and reveals that, when she met him, she thought he was “pretty ugly”. “Today Thiago is a hottie, but I love the person he is even more. I love this man so much”.

You are always in stadiums with your husband. What is your style? Are you more in yours or are you one of those who give instructions?

I’m quite a bugler (laughs). I don’t keep giving instructions because there’s no way to teach the priest how to say a mass, but when I think he was bad at the game or missed a move, I say it. I’m talking about him and his teammates too. Analyze the game. He is sometimes surprised by my game reading.

Football players tend to be very harassed. How do you deal with it?

Thiago doesn’t have and never had that style of enjoying ballads, going out with friends for dinner. He always was, and he’s very homely. With regard to harassment, thank God, I never had a problem. Swear. Thiago doesn’t open up either and even when taking pictures with fans, for example, he’s not one to hug. It is his. But, he also knows that if I have to run the baiana, if I have to break the dick, I will. I don’t stand on ceremony.

🇧🇷Two days after this interview, the message went viral on social networks. photo of an alleged ex-lover of Thiago, dressed in the player’s shirt and aboard a luxury car. F5 went back to look for Belle, but she didn’t answer the calls anymore. Her aide replied: “Fake news spreads quickly”🇧🇷

How is Thiago Silva at home?

Thiago? Thiago does nothing (laughs). He is my third child in life. If we go on vacation, he only remembers to put his underwear in the suitcase. Now, when it comes to the professional side, he is super attentive and organized. He is very professional, disciplined and keeps a sacred routine.

So you’re the one who takes care of everything?

Yup. I decide everything. I pass things to him, of course, because I need his opinion, position and endorsement. But, I manage pretty much everything

Will Thiago go to another World Cup or is this the last one?

Do you want to hear what he thinks or what I think?

So I think it will and I want it to go. I played for the universe, I played for God. But not for him. Thiago demands too much, you know? If he can’t give the total, he’d rather be out. Therefore, I think he will say goodbye to this World Cup.

How do you react to criticism about your husband?

Look, I respect and accept all constructive criticism. He’s like that too. Now, when I feel that the criticism is coming from those who don’t understand anything or have nothing to do with it, I do want to blow my mouth. Thiago stops me, my advisor too, and then I control myself.

How is your routine during the World Cup? Do you go a long time without talking?

Not. It doesn’t have that. We talk when we can, we exchange messages throughout the day too and whoever wakes up first already calls the other. Before going to sleep, we talk to each other (laughs). We saw each other on off days, after open practices and after games. We don’t get upset.

The worst day of your life was Brazil’s 7-1 defeat by Germany?

Worst? Not. The worst day of our lives was when the doctor said that Thiago would need a lung operation and he would never play football again. Brazil’s defeat in the 2014 World Cup was very sad. Thiago didn’t play, but he was devastated by his teammates. The team was incredible and had conditions to beat Germany. But I’ll tell you one thing: if he were on the field, the score wouldn’t be so elastic. Brazil could even lose, but it wouldn’t be 7-1. He was going to assert his leadership.

Who is more jealous in the relationship?

When you saw Thiago for the first time, did you get that feeling ‘I’m going to marry him’?

In fact, he saw me first. It took me a while to notice him, because Thiago was very shy. People said he was into me, but I didn’t care. He was also pretty ugly! (laughs).

But after you met him, did everything change?

Over time, we got closer, became friends and I started to like the way he treated me, with great affection and respect. That got my attention, I got involved and then I didn’t see his ugliness anymore. Today, Thiago is a hottie, but I love the person he is even more. I love this man and our life so much.