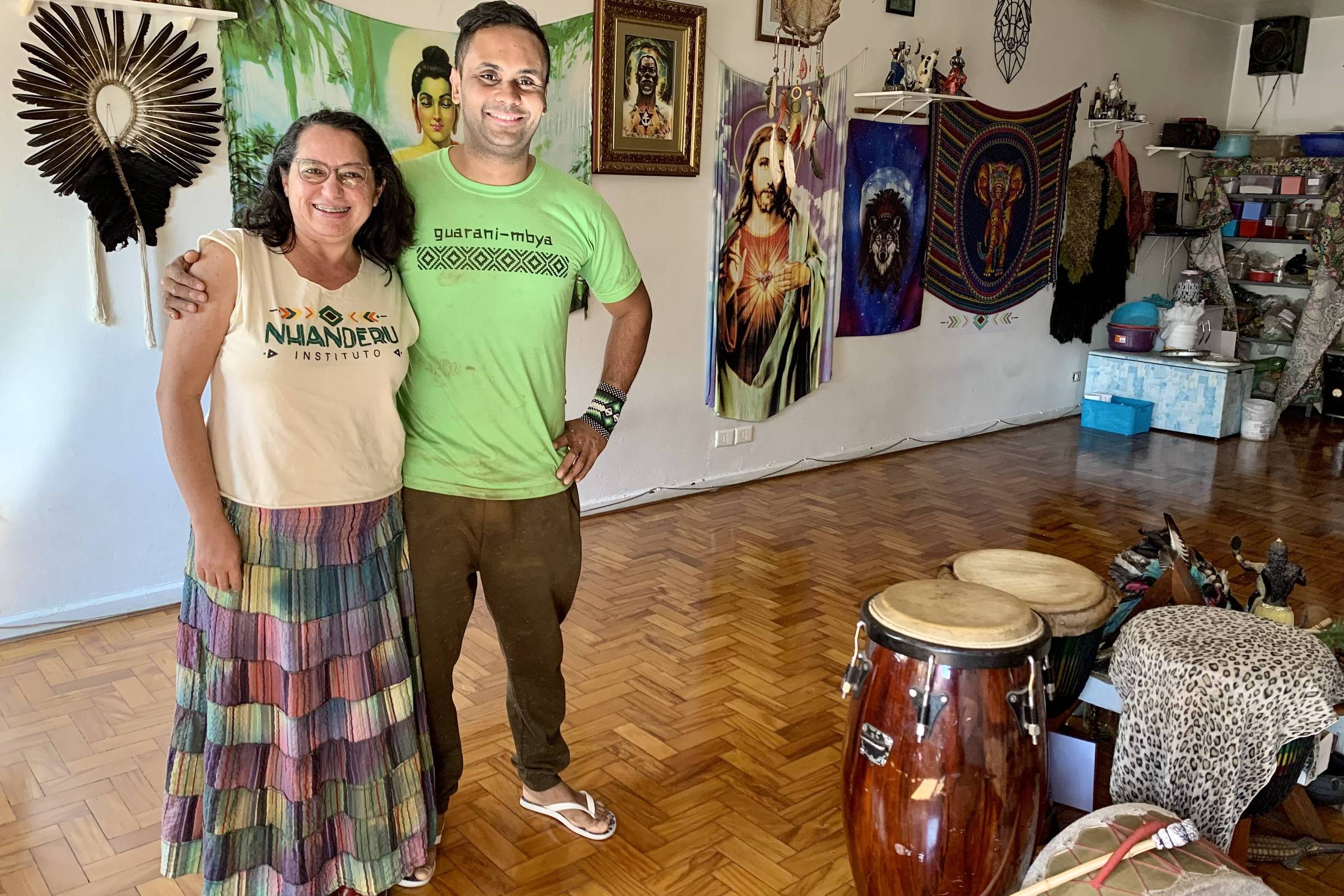 At first glance, it seems counter-intuitive: using a psychedelic drug to get addicts out of their craving for cocaine and crack. At the Nhanderu Institute, which is based in the heart of Cracolândia in São Paulo, using drugs was never a problem and ayahuasca, there, becomes the “medicine of the forest”, just like snuff.

In the leadership of the NGO, which has 62 contributing members, the couple Adriano de Camargo and Sebastiana da Silva Fontes, known as Tuca, both are 44 years old. She is a social worker from Piauí specializing in human rights and the homeless. He, grandson of Guarani, ex-inmate who once lived on the sidewalks of downtown São Paulo and graduated as a teacher in jail.

“Ayahuasca saved our lives, that’s no exaggeration,” says Tuca. “We entered the ayahuasca route together, to heal ourselves.”

In fact, she arrived a little earlier. Adriano was at the end of his journey to abandon the abusive use of alcohol and other drugs and was afraid to take anything.

Tuca came from years of treatment for depression and drugs like the antidepressant fluoxetine and the hypnotic zolpidem. She felt enslaved. “Am I going to take this my whole life? When the ayahuasca arrived, I felt liberated.”

The social worker had already heard about tea and how people who attend ayahuasca rituals seem to have a lower incidence of psychic disorders. One day a friend from Sorocaba pointed out the bottle he kept at home and asked them if they wanted it. Adriano answered for Tuca: “I don’t, but she wants to”.

“It was a very remarkable experience, total cleaning, immediate relief”, says Tuca today. “Just me and the force, no music. I felt smarter.” She would still take the drugs for a year, but got rid of them for good.

“Strength” is a common name among ayahuasca adherents for the tea’s psychedelic effects. It contains dimethyltryptamine (DMT), a psychoactive substance from the leaves of the chacrona bush, one of the ingredients of the sacrament in churches such as Santo Daime, União do Vegetal and Barquinha.

Adriano only joined the psychedelic drink later on, when they started going to the house of a psychologist, Bruno Ramos Gomes, who worked with the homeless and dependents. In his case, too, it was transformative.

“My life, and that of Tuca, is based on caring for people in socially vulnerable conditions”, says the leader of Nhanderu. “Ayahuasca came later, as another element in our utility belt. It’s a tool.”

It was working on the streets that they met again, years after having an affair. Tuca, graduated in Social Sciences at the Santo André Foundation, had applied for the Social Assistance and Development Secretariat and had taken over the coordination of service tents in central São Paulo neighborhoods such as Santa Cecília and Barra Funda.

Adriano, after several hospitalizations in clinics and therapeutic communities, graduated as a professor of Literature at Anhanguera Educacional. He worked on a reinclusion project that used football as a starting point to create bonds and was an advisor in the community center connected to the Santa Cecília tent, where he met Tuca. They dated again and soon got married.

Like his wife, he joined the Brazilian Multidisciplinary Association for Drug Studies (Abramd). There he learned about the concept of harm reduction, which he immediately associated with the benefits of ayahuasca.

“This medicine will reduce ten years of therapy in one session”, he says he heard from psychiatrist Dartiu Xavier da Silveira, from Unifesp, a scholar of ayahuasca and other psychedelics. “Another universe has opened up for me. Why not take this to other people?”

Adriano says he went to study and learn more. He took courses in psychoanalysis at the Sedes Sapientiae Institute. He regained contact with his Guarani ancestry, the grandparents of the Mbya ethnic group on the coast of São Paulo (Nhanderu means something like “Creator” in his language). He made several trips to Acre to learn how to make ayahuasca from traditional peoples such as the Noke Koi (Katukina).

Tuca and he were tired of dealing with 500, 600 people in the tents. They wanted to start a more sustainable work, on a small scale, based on harm reduction, bonding with rituals, replacement therapy and continued care, through psychological follow-up.

At Nhanderu, founded on April 19, 2018 with the help of friends, abstinence is not required, for example. “Using drugs is not wrong”, defends Adriano. “You can use it without destroying yourself.”

The institute was born in a small commercial room on Conselheiro Nébias Street, in the middle of Cracolândia. Today it occupies two floors, including the products and accessories store that is the biggest source of resources for Nhanderu, earning an average of R$ 6,000 per month. The 62 members contribute with monthly fees starting at R$60 to pay the bills.

The gateway for dependents and homeless people are the snuff wheels on Thursdays. Cocaine users, for example, adapt well to the powder blown into their nostrils through tipis (an instrument with a hollow reed). The impact of snuff is very strong, more physical than psychic, but nothing that can knock down those who are used to harder drugs.

Over time, the visitor may be invited to the healing ceremonies with ayahuasca and snuff that take place on Sundays. The hall has a small altar with candles, saints, plants and other shamanic objects, surrounded by mats, blankets and pillows.

After listening to a short lecture and having tea, the participants settle down and spend hours listening to music. When the effect begins to wear off, a conversation circle opens in which touching reports of overcoming trauma and abuse are heard. The meeting ends with a supper, sharing the food brought by everyone.

The care continues with attendance by psychologists, on Tuesdays. The idea of ​​Tuca and Adriano is to use spirituality to reconnect the person with a more serene and productive life – spirituality, and not this or that religion, Adriano points out.

On the walls of the hall where the Sunday ritual takes place there is a little bit of everything, from Jesus to Ganesh and Iemanjá. For newcomers, Adriano asks those gifted with mediumship to refrain from incorporating entities, so as not to disturb those who are not his believers.

Neoshamanic eclecticism is the hallmark of Nhanderu: “You can believe in Jesus, Buddha, fire or water, in energies”, explains Adriano. “It’s not like an evangelical church, I never say salvation is here or there.”

“The challenge of conducting and sustaining this work for years on end is enormous”, praises Lucas Maia, a DMT researcher at UFRN’s Instituto do Cérebro, who has worked with Adriano at Unifesp. “I take my hat off to the service that Adriano, his wife Tuca and the entire team of collaborators at Instituto Nhanderu are performing.”

Be sure to also see the reports from the series A Ressurreição da Jurema:

It is always worth remembering that psychedelics are still experimental therapies and certainly do not constitute a panacea for all mental disorders, nor should they be self-medicated. Talk to your therapist or doctor before venturing into the area.

Facebook
Twitter
Pinterest
WhatsApp
Previous article
“Beyond the Borders”: The 7th Kastellorizo ​​International Documentary Festival starts tomorrow
Next article
Gisely Bicalho talks about mental health and compulsion at BBB: ‘I ate until I threw up’