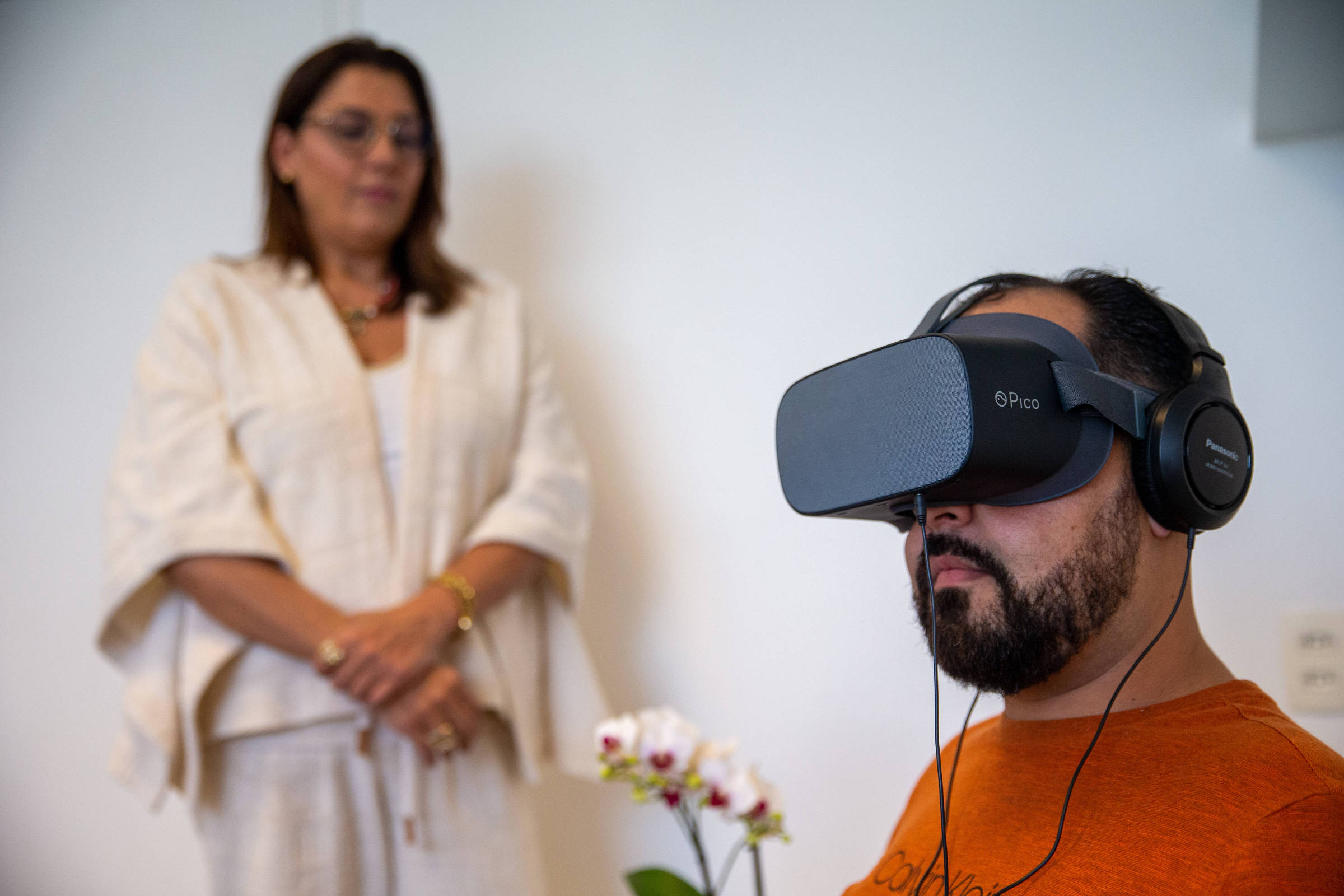 Paulistanos have turned to virtual reality to treat phobias, which are the extreme irrational fear of situations, objects, animals or activities.

This year, a review of studies evaluated the effectiveness of the method and concluded that the results are positive, although the methodological quality was considered low because there were few volunteers.

The review, published in May of this year in the scientific journal Disability and Rehabilitation, concluded that the techniques analyzed in 18 studies were effective against phobias such as those involving injection, fear of animals and so-called natural phobias, which include fear of water, storms and dark, for example.

The researchers emphasize in their conclusions that the cost of equipment for patients and the innovative nature of these techniques can pose challenges for the acceptance of the treatment.

In the view of patients, the treatment has been positive. This is the case of university professor Francisco Nascimento, 35, who lives in São Paulo.

Before the Covid pandemic, Nascimento traveled by bus to Rio de Janeiro along with his partner. One of the trips that the couple intended to do was to go up by cable car to Morro da Urca and then go to Sugarloaf Mountain. The problem is that the teacher had a phobia of heights and felt sick.

Treatments with and without virtual reality are done by exposing the patient to the cause of extreme fear. However, in cases such as fear of traveling by plane, for example, the approach can be complex and even unfeasible without technology.

Using a computer program linked to virtual reality glasses, the therapist transmits images that simulate situations to the patient and makes interventions. The cheapest glasses cost around R$90.

Although patients know they are in a room, the phobia does not differentiate the physical world from the virtual one, explains the psychologist. “A phobia is an anxiety disorder caused by irrational fear. We trick the brain, so the body feels it,” she says. Virtual reality sessions can range from 5 to 20 minutes.

Video: See simulations used to treat fear of heights and fear of planes

Francisco had doubts about the effectiveness of the treatment and thought the experience would not be much different from playing video games, but the sessions changed his mind. “It feels like being at the airport,” he says.

The patient says that he even lost a promotion at work because of the phobia. “I would need to travel by plane, so I refused,” he says, who felt symptoms of anxiety common to the condition, such as nausea, tremors, chills, excessive sweating, headache, dizziness, vertigo, muscle tension, increased frequency of heartbeat, dry mouth and even difficulty breathing.

It took more than four months of treatment with biweekly sessions until Francisco was discharged at the end of last year. Since then, he has traveled by plane three times.

Carolina da Luz, 26, had great difficulty speaking and being in public. Anxiety got in the way of both school and college. The young woman, who lives in São Paulo, says that she had a panic attack about to get on the minibus that takes students to and from a university in the interior of the state because she would be surrounded by unknown people throughout the journey. Her parents ended up taking her to class, but on the way back she had to face the collective.

“I came back with a lot of pain in my stomach. The discomfort went away the moment I got home”, he says.

Luz was diagnosed with social phobia by Cristiane Maluhy Gebara, a psychologist and professor at the Anxiety Outpatient Clinic at Hospital das Clínicas da USP (University of São Paulo).

Gebara, who works in private practice, uses a virtual reality app he created about nine years ago.

The SocialUP3D application simulates common situations, such as asking someone on the street for information. These are moments that cause suffering in people with social phobias. For the session, you need a smartphone and a Cardboard — glasses developed by Google.

Cardboard can be purchased for around R$40 on the internet, and the app is available for Android devices for free.

The technique is part of the cognitive behavioral therapy approach, which seeks to treat patients by identifying patterns of thinking and actions that negatively influence their lives.

After two months of treatment, in 2019, Luz was discharged. She finished college in psychology and, since January of this year, has been offering her patients the same treatment that has alleviated social phobia.

Both Gebara and Haddad work in person and remotely. According to the professionals, the possibility of interacting with anyone anywhere makes the treatment more accessible, especially for people who would have difficulty going to the office due to the phobia.

The use of the technique, however, is contraindicated for pregnant women and people with vertigo, cardiovascular problems, serious mental disorders such as schizophrenia and psychosis. It is also not recommended for anyone who has recently had surgery or has been diagnosed with epilepsy.

Gebara says he is not aware of the use of virtual reality to treat phobias through the SUS (Unified Health System).

Facebook
Twitter
Pinterest
WhatsApp
Previous articleArmenia – Azerbaijan accuse each other of violating the truce
Next articleKavala: The murder of the 52-year-old businessman was solved – He was killed by his 25-year-old friend