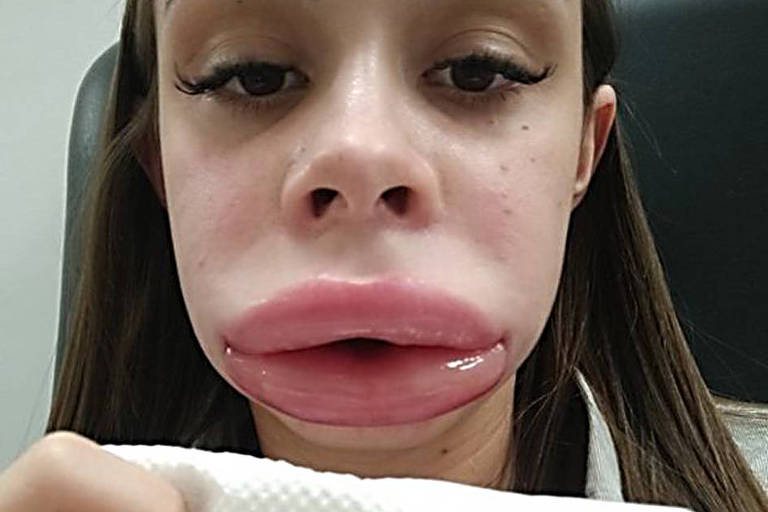 After performing a lip filler with hyaluronic acid, businesswoman Pamela Andrade, 23, suffered severe swelling in her mouth, face, eyes and thought that the symptoms were a side effect of the aesthetic procedure.

The face region was so swollen that, when he released the alert on his Tik Tok profile, some people thought that the posted images were a montage.

To her surprise, the symptoms were due to a rare genetic disease that, for many years, was neglected by doctors and attributed to food. “I went back to the clinic right away and didn’t relate it to the disease. I thought something had gone wrong”, she says in an interview with BBC News Brasil. The first sign started with the top of the lips.

“It’s normal to swell, but not like that. They took me to the hospital, they took pictures and nothing like that had ever happened. I was taking serum and even heard from the doctor that I was allergic to hyaluronic acid. I took an antiallergic and waited”, he says. .

Even receiving medication, the swelling did not go away completely and Pamela only had her “normal” face again after almost eight days.

For many years, the young woman believed that the swelling in her body was due to food. Once, when eating popcorn with bacon, her face and hands became very swollen and she related the change to the food.

The businesswoman recalls that the first signs began in her teens and, at 17, she even went to the hospital. “Once the allergy got really bad, but it was always treated as something food. They applied corticosteroids, but it didn’t work”, she recalls.

On some occasions, the swelling occurred even after she tapped her cell phone against her lips. “I was playing with my cell phone, I fell and hit my mouth, for example, and then I had a crisis. But whenever I went to the doctor, I was treated like a food allergy”, she says.

“My hand has already swelled and, later, the intestine swells too. It looked like gastritis and I vomited a lot”, he says.

When she was already an adult, she began to suspect that it wasn’t just an allergic irritation caused by food. The last time she had the crisis, after the cosmetic procedure, she decided to investigate further.

After the swelling subsided, the young woman went to an allergist, as the signs related to food did not make sense. Upon arriving at the office, she reported the symptoms and the doctor asked for specific tests. “She asked several questions that matched a disease and I had to do a rare blood test and only a laboratory did it”, she points out.

The first result was inconclusive and it was necessary to redo the test. When analyzing the second exam, it was found that she suffered from hereditary angioedema, a rare genetic disease. Even though her parents didn’t have the problem, she believes she inherited the condition from her aunt, who also suffered from swelling when she was alive.

At the time, the medication to treat the problem cost around R$8,000 and it was necessary to go to court to acquire it.

However, the doctor also referred the young woman to the gynecologist, as the contraceptive taken for years could be one of the triggering factors of allergic crises. “I’ve been taking it since I was 15, because I have a polycystic ovary. The doctor made me stop using estrogen methods. I was taking the pill only with progesterone,” she said.

Since replacing the medicine composition years ago, she has not had any allergic symptoms. Currently, he chose not to use any type of hormone. “The contraceptive was like a trigger for the crises”, she points out.

After much investigation, she discovered that the trauma generated by the needle during the lip filler was the reason for the swelling and crisis after the procedure at the aesthetic clinic. “It wasn’t the hyaluronic acid, it was the needle,” she says.

By publishing her report on social networks, Pamela received several comments from other people who probably suffer from the problem, but to this day do not know they have the disease. In a single post alone, the video has just over four million views and 534,000 likes.

According to the young woman, the content was made as a warning so that other people can also receive an early diagnosis and follow with the correct treatment. “If I had been treated correctly I would not have taken so many steroids, adrenaline and could have discovered that it was the contraceptive that caused the problem and avoided many crises”, she points out.

In addition to the face, she also suffered from swelling in the intestine and believed that the discomfort was something gastrointestinal or another problem. “I missed work a lot, I thought it was gastritis and I took medicine. Even so, the symptoms only got better after three or four days”, she says.

“These are symptoms that you go to the emergency room and the doctors treat like allergies and gastritis, give medication, but this medication has no effect and results in a lot of suffering”.

Today, she has been without any crisis for some time and celebrates, even if late, the discovery of the disease. “I have a totally normal life and I haven’t had any more swelling.”

What is hereditary angioedema?

It is a rare genetic disease, which affects 1 in every 50,000 people and whose main symptoms are attacks of deforming swellings.

“It mainly affects the face, but it can also reach the extremities such as hands and feet, leaving them very asymmetrical. It can also attack the genitals and reach the airways such as the tongue, larynx and cause edema of the glottis. It can also have edema in the loops intestinal tract, causing abdominal pain”, explains Marcelo Aun, professor of Immunology at the Graduation in Medicine at the Faculdade Israelita de Ciências da Saúde Albert Einstein.

The most common type is called C1 esterase inhibitor-deficient angioedema. This is a protein responsible for controlling the activation of other proteins in our immunity that are known as the “complement system”.

As with Pamela, local trauma can trigger and increase allergic crises. “Traumas are important triggering factors and crises usually start some time later in the traumatized area, even if they are of low intensity”, points out Alex Isidoro Ferreira Prado, an immunologist at USP (University of São Paulo) and a specialist on the technical team at the Clínica Croce.

Estrogen-containing birth control pills can also increase allergic flare-ups, making swelling worse. “In the case of hereditary angioedema, estrogen can trigger crises and is present in combined contraceptives, hormone replacement and during the menstrual cycle”, says Anete Grumach, member of the Scientific Department of Immunodeficiencies at ASBAI (Brazilian Association of Allergy and Immunology).

According to the expert, estrogen acts on the systems controlled by the C1 inhibitor, resulting in an increase in bradykinin, which is directly responsible for angioedema crises. Generally, when women want to continue with contraceptive methods, it is recommended to use only those based on progesterone.

An early diagnosis is important, as allergic crises can disrupt the patient’s quality of life. However, doctors point out that, in many cases, it can take years, since the medical profession in some cases treats it as an allergy to food or medication.

Although the diagnosis is difficult, the therapeutic line is more accessible to patients and the treatment must be carried out by an immunologist.

The person can receive medication in the crises and medicines that will prevent new prophylaxis. Some individuals may also purchase prophylactic medications prior to surgical procedures in risky sites such as the face.

There are older treatments that can be provided by the SUS, such as attenuated androgens and drugs such as tranexamic acid. “We have medicine for crisis prevention, which is a male hormone-based pill, but sometimes it is lacking in the SUS”, reinforces Aun.

Some new medications act directly on the disease, blocking, for example, bradykinin, an important substance in crises. Other treatments provide the patient with the protein that he does not produce, called a C1 inhibitor. There are also injectable medications, but they are expensive and not available in the SUS (Unified Health System).

Experts point out that each treatment must be evaluated individually and that the person should never medicate alone. “When not properly treated, the disease can lead to death in up to 40% of cases due to laryngeal angioedema, causing asphyxia”, says the USP specialist.

“Patients should always pay attention to triggers, avoid crises and use prophylaxis. Each orientation should be individual, but in general, trauma, high-impact sports, care with dental and aesthetic procedures should be avoided”, concludes the specialist.