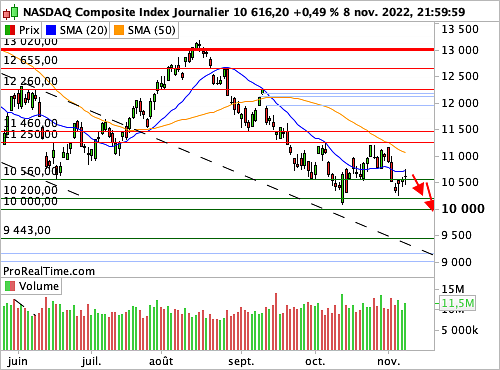 Nasdaq Composite: After a school doji, a return to volatility?

(News Bulletin 247) – A point on the outcome of the Midterms elections, the results of which are becoming more refined: the hypothesis of a red wave, once feared by the Democratic camp, is receding. At the time of writing these lines, in the House of Representatives (where all 435 seats have been renewed), the balance of power is 197 Republicans against 172 Democrats. If the absolute majority should be reached for the Republican camp, the announced red wave clearly did not take place. In the powerful upper house (the Senate, where 35 seats are to be filled), the Democrats, at this stage of the counting, lead by one seat (48 against 47). Note that in the event of a 50-50 tie, the Democrats would retain control thanks to the vote of Vice President Kamala Harris.

Another fundamental subject in the trading rooms this week is the consumer price index which will be published tomorrow (2:30 p.m. Paris time). On an annualized basis, and for the broadest basket of products (food and energy included), prices are expected to rise by 7.9%, compared to 8.2% last month. “U.S. inflation data released this week will come under scrutiny, after the latest jobs data confirmed the continuing labor shortage. policy of extreme tightening”, note the strategists of the BlackRock Investment Institute, in the conclusions of their forum on the “new market regime”.

To follow at 4:00 p.m. the publication of the final data on wholesaler stocks for the month of September, and at 4:30 p.m. crude stocks across the Atlantic.

The flagship index of technology stocks of the American dimension traced, on the amplitude of the body of the candle of the day before, a candle in doji tombstone, which illustrates the breathlessness of the reaction started on 13/11. This candle was confirmed the next day by a marubozu elongated, graphic illustration of a continuous mobilization of the sales camp. Friday’s session did not allow the weekly highs to be exceeded, and Monday’s 31/0 harami is puzzling, especially since it was completed by a clear bullish encompassing, certainly without transcendent volumes. Volumes woke up on Wednesday, delivering a readable bearish message, complete with the index closing exactly at its session lows.

the doji of school drawn Tuesday before the important deadlines translated a form of uninviting hesitation.

EUR/USD: Negative technical signals at the top of the pattern