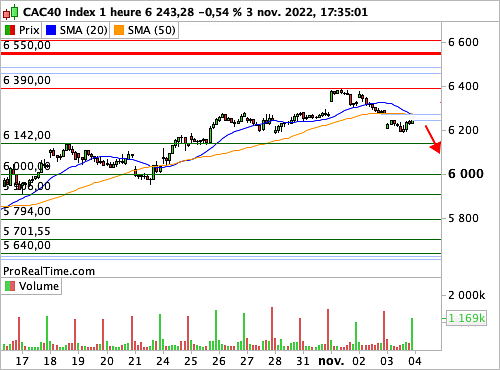 (News Bulletin 247) – Affected by the prospect of continued restrictive monetary policies of the main global central banks, the Paris market contracted on Thursday (-0.54% to 6,243 points), the day after a drop in 0.81%. The particularly firm tone of J. Powell at the end of the Monetary Policy Committee on Wednesday brutally cooled the atmosphere on both sides of the Atlantic.

The Fed Funds saw their rent rise by 75 basis points, to 4.00%, as widely expected. What weighed, however, is the will to clearly show to push back the idea of ​​a break in the monetary tightening process (an option considered too “premature”) as well as the clear warning on the prospects of reaching the neutral “rate”. The objective of precise quantification of the latter is still delicate. In any case, it exceeded 5% after this monetary deadline.

Sweeping the scenario of a pause, the Fed “opens the door to more modest rate hikes, but without giving the impression of being dovish”, for Christian Scherrmann, US economist, DWS. “With policy rates currently in the 3.75-4% range, monetary policy is de facto in tightening territory. think about not raising the rates any more.”

In terms of statistics, the unemployment rate in the Euro Zone came out slightly down, unsurprisingly, at 6.6% of the active population. It stagnated at 3.0% in Germany, according to the latest figures from EuroStat for the month of September in final data. On the other side of the Atlantic, the ISM services in final data for the month of October was very disappointing, at 54.5, far below expectations. Finally, on the employment front, weekly registrations for unemployment benefits have just been published, at 217,000 new units, still just as low. Still on the employment front, the NFP will definitely be the second major event of the week. This federal monthly report will be unveiled at 1:30 p.m. A clear opportunity to measure the degree of tension on employment, tensions themselves generating inflation…

“The labor market is the key variable“, slice Christophe Morel, chief economist at Groupama Asset Management. “Currently, in the United States, the demand for labor exceeds the offer of approximately 5 million, which feeds wage inflation in the private sector of 6%. To guarantee its inflation target of 2%, the Fed must bring wage increases back to a rate of 4%. Unless we assume a sharp rise in the participation rate, which seems unlikely to us, the central bank must then “force” a fall in the demand for labor by provoking a cyclical recession. For that, the Fed needs to bring its key rate well above 5%.

On the stock side, BNP Paribas as well as Axa ended up more than 3%. The bank and the insurer were carried by quarterly results higher than analysts’ forecasts. In contrast, Legrand lost 5.4% after reporting nine-month results in line with expectations. But its margins have eroded significantly due to inflation. Faurecia (-8.7%) is violently off the road on the stock market, the automotive supplier intends to accelerate the pace of its debt reduction under the threat of rate hikes. The whole of the automobile compartment was penalized by the announcements of Faurecia, Renault lost 3.8% and Plastic Omnium lost 1.5%. Even Stellantis, which posted quarterly sales well above expectations, ended down 3.1%. Finally, CGG plunged (-24.08% to 0.6948 euro) which published disappointing quarterly results.

Note that the American East Coast will switch to winter time overnight from Saturday to Sunday. In the meantime, Wall Street will open at 2:30 p.m. (Paris time) and not 3:30 p.m., therefore.

A point on the other risky asset classes: around 08:00 this morning on the foreign exchange market, the single currency was trading at a level close to $0.9775. The barrel of WTI, one of the barometers of risk appetite in the financial markets, was trading around $88.60.

To follow as a priority on the statistical agenda this Friday, the PMI services in the Euro Zone at 10:00 a.m. (final data for October) and the monthly federal report (Non Farm Payrolls) on private employment (excluding agriculture) in the United States at 1:30 p.m.

In the immediate term, after a shortness of breath gap (01/11), the barometer traced on Tuesday November 1 a doji very pronounced, uninviting high shade. The confirmation was clear on Wednesday with a bearish engulfing combination in slightly higher volumes, then Thursday with a bearish gap.

This bearish scenario is valid as long as the CAC 40 index is trading below the resistance at 6390.00 points.