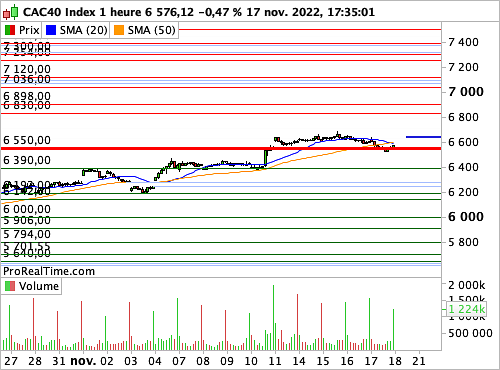 (News Bulletin 247) – While the market realizes that the Fed is not yet ready to release a little tension on its monetary cord, the CAC 40 contracted by 0.47% to 6,576 points yesterday. The scenario of a continuation of an equally belligerent strategy on the part of the Fed is gaining ground. The Fed’s intentions remain at the heart of the debate, especially since the latest inflation figures, slightly down for the CPIs, have fueled the beginnings of hope.

The market is cooled by the remarks considered restrictive by several members of the American Federal Reserve (Fed), namely the president of the Fed of Kansas City, Esther George, and that of San Francisco, Mary Daly. The first notably warned, in an interview with the Wall Street Journal, of the danger of prematurely stopping increases in key rates. Mary Daly, she, estimated that a landing of the key rates of the central bank between 4.75% and 5.25% seemed “reasonable”.

Among the main lessons on the statistical front yesterday, apart from the real estate figures which came out perfectly in line with expectations, the Philly Fed (Philadelphia Fed manufacturing index) was particularly disappointed, sinking further into negative territory at -19 .4, completely missing the target. At the same time, weekly registrations for unemployment benefits, remaining close to 220,000 new units, confirm the idea of ​​persistent tensions on the labor market, tensions that generate inflation.

On the stock side, Renault finished at the top of the CAC 40 (+2.3%) followed by Société Générale (+0.84%) and BNP Paribas (+0.8%). Atos gained 2.7% after announcing the sale of its activities in Italy. JCDecaux gained 1.8%. The group benefits from an increase in the purchase of the bank UBS.

A point on the other risky asset classes: around 08:00 this morning on the foreign exchange market, the single currency was trading at a level close to $1.0380. The barrel of WTI, one of the barometers of risk appetite in the financial markets, was trading around $82.10.

To follow as a priority on the statistical agenda this Friday, a speech by Mrs. Lagarde, President of the ECB at 9:30 a.m., and the sale of old homes, across the Atlantic, at 4:00 p.m.

The good surprise of the slowdown in inflation on the other side of the Atlantic, if it caused a surge in the Nasdaq Composite and the Nasdaq 100, the S&P500 to a lesser extent, has a relief effect on this side of the Atlantic. The continued mobilization of the buying camp after the statistical publication was reflected on Thursday 10/11 by an ample marubozu, which came to cover the bearish gap of August 22, with a clear return to a resistance zone at 6,550 points. The ability to get rid of it in high volumes would pave the way for a continuation of the October rally. It is precisely this level that is being redefined.