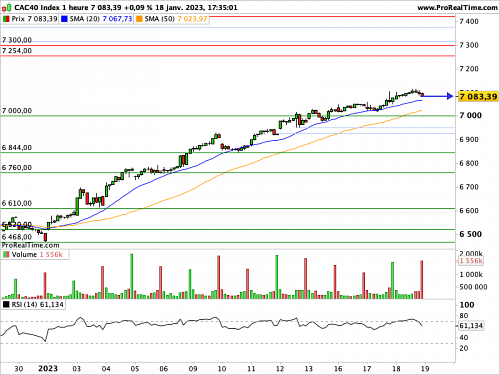 (News Bulletin 247) – The CAC 40 index managed to build, albeit with more difficulty, a twelfth candle with a green body yesterday, out of thirteen possible since the start of the year. Beyond 7,000 points, however, entering new highs becomes more and more difficult, and the beginnings of a legitimate consolidation are taking shape.

The market psychology is nonetheless unchanged: it is that of the return of confidence against a background of inflation which is finally showing signs of slowing down, on both sides of the Atlantic. The market mood remains permeated by the idea that the efforts of the Fed in its unpopular process of monetary tightening are beginning to bear fruit. The latest CPI (consumer price index) clearly illustrated this last week. “The market remains confident that the Fed will not raise rates as much as it indicated in the December projections. Fewer rate hikes create favorable market dynamics for risk (equities, credit and duration included) against a drop in the dollar”, for Axel Botte, International Strategist at Ostrum AM. “However, it cannot be ruled out that the reopening of China will induce an early rebound in oil prices”, nuances the asset management professional. This is confirmed by the International Energy Agency (IEA).

In terms of statistics on Wednesday, the focus shifted to PPIs (Producer Price Indices) and Retail Sales, both released an hour before the opening of equity trading at 2:30 p.m. The former (excluding food and energy) came out in line with expectations, with a monthly increase of 0.5%. The seconds, excluding cars, corrected (-1.1% against -0.5% expected) in December. What to go in the direction of a controlled cooling of the economic machine…

In terms of values, Capgemini posted the strongest increase in the CAC 40 (+2.95% to 176.30 euros) thanks to Barclays, which moved to “overweight” on the value. On the other hand, Fnac Darty had a difficult session (-6.8%) after having revised downwards its medium-term cash generation objective. Pierre et Vacances for its part accelerated upwards (+6.7%) while the company communicated an increase in its turnover in the first quarter of its 2022-2023 financial year, driven by a return of holidaymakers to its complex.

A point on the other risky asset classes: around 08:00 this morning on the foreign exchange market, the single currency was trading at a level close to $1.0800. The barrel of WTI, one of the barometers of risk appetite in the financial markets, was trading around $78.70.

To follow as a priority on the macroeconomic agenda this Thursday, a speech by Mrs. Lagarde, President of the ECB at 11:30 a.m., within the framework of the Davos Forum, and across the Atlantic, at 2:30 p.m., weekly registrations for unemployment benefits and the index manufacturer Philly Fed.

Since the start of the year, the flagship Parisian index has traced only one candle with a red body, proof of the ability, even in the event of a negative closing (05/01 for example), to mobilize buyers in during the same session. The paths of the short and long moving averages are now moving apart, strengthening the interpretation of buying sentiment. Naturally we will interpret the trough in volumes on Monday in the light of the absence of many operators (and initiatives) in the absence of benchmarks from Wall Street, which remained closed for a holiday. In the immediate future, the moving average at 8 p.m. is in danger.

Facebook
Twitter
Pinterest
WhatsApp
Previous article
Hatzidakis on SKAI 100.3: At the end of January, one in two pensioners will see that they will receive an additional pension on an annual basis
Next article
Qatargate: The Qatari Foreign Minister claims that the accusations of Doha’s involvement are unfounded