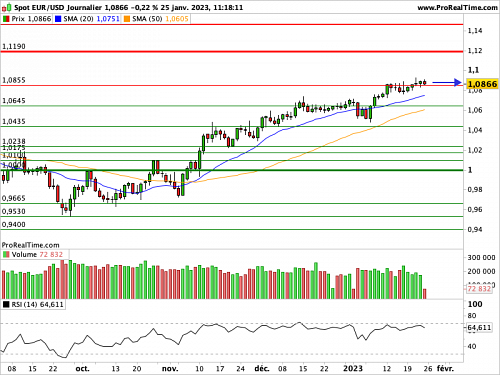 (News Bulletin 247) – In a climate where the appetite for risk, although in slight decline, persists at the start of the year, the Euro continued to proudly stand up to the Dollar, as indices of “soft landing”, i.e. a soft landing of the main economic poles in the Euro Zone are multiplying. The long-awaited 1st estimates of the PMI indicators confirmed this framework yesterday.

The German industrial component, which traditionally has a strong impact, even rose above the 50-point mark, which separates, as a reminder, a contraction from an expansion in the sector in question. Passage above 50 also to report for the services component of the whole of the Euro Zone.

Chris Williamson, Chief Business Economist at S&P Global Market Intelligence, shed the following light on the survey’s raw data: a stabilization of the region’s economy in January.The contraction may indeed have peaked in October, when fears of an energy crisis began to fade, thanks in particular to the fall in prices, itself favored by particularly mild temperatures and generous government aid.”

Equivalent indicators will also have exceeded their targets on the other side of the Atlantic, while remaining well below 50 points. In contrast, the Richmond Fed’s manufacturing index continued its jittery swings, plunging back into negative territory at -11, completely missing expectations.

The single currency is currently trading at around $1.0870, as important deadlines approach: PCE prices, the Fed’s flagship measure of inflation appreciation, and the FOMC, the outcome of which is next Wednesday. “The Fed has […] abandoned the 75bp hikes, after 4 successive ones and could even, according to the expectations of market players, increase by only 25bps at the FOMC on February 1st.” Vincent BOY (IG France).

In the immediate future, the IFO business climate index in Germany is perfectly on target, at 90.2, up slightly.

At midday on the foreign exchange market, the Euro was trading against $1.0865 around.

In the absence of validation of a configuration in ascending method, a continuation of neutral oscillations, in thin range near the moving average to 20 days (in dark blue) is expected. The very structure of the ongoing consolidation nevertheless testifies to the advantage taken by the Euro at the start of 2023.

We will maintain this neutral opinion as long as the Euro Dollar (EURUSD) parity prices are positioned between the support at 1.0645 USD and the resistance at 1.1190 USD.

Facebook
Twitter
Pinterest
WhatsApp
Previous article
Serres: Fraud against two elderly brothers with loot of 150,000 euros
Next article
Zak Kostopoulos: The prosecutor suggests that the broker should return to prison