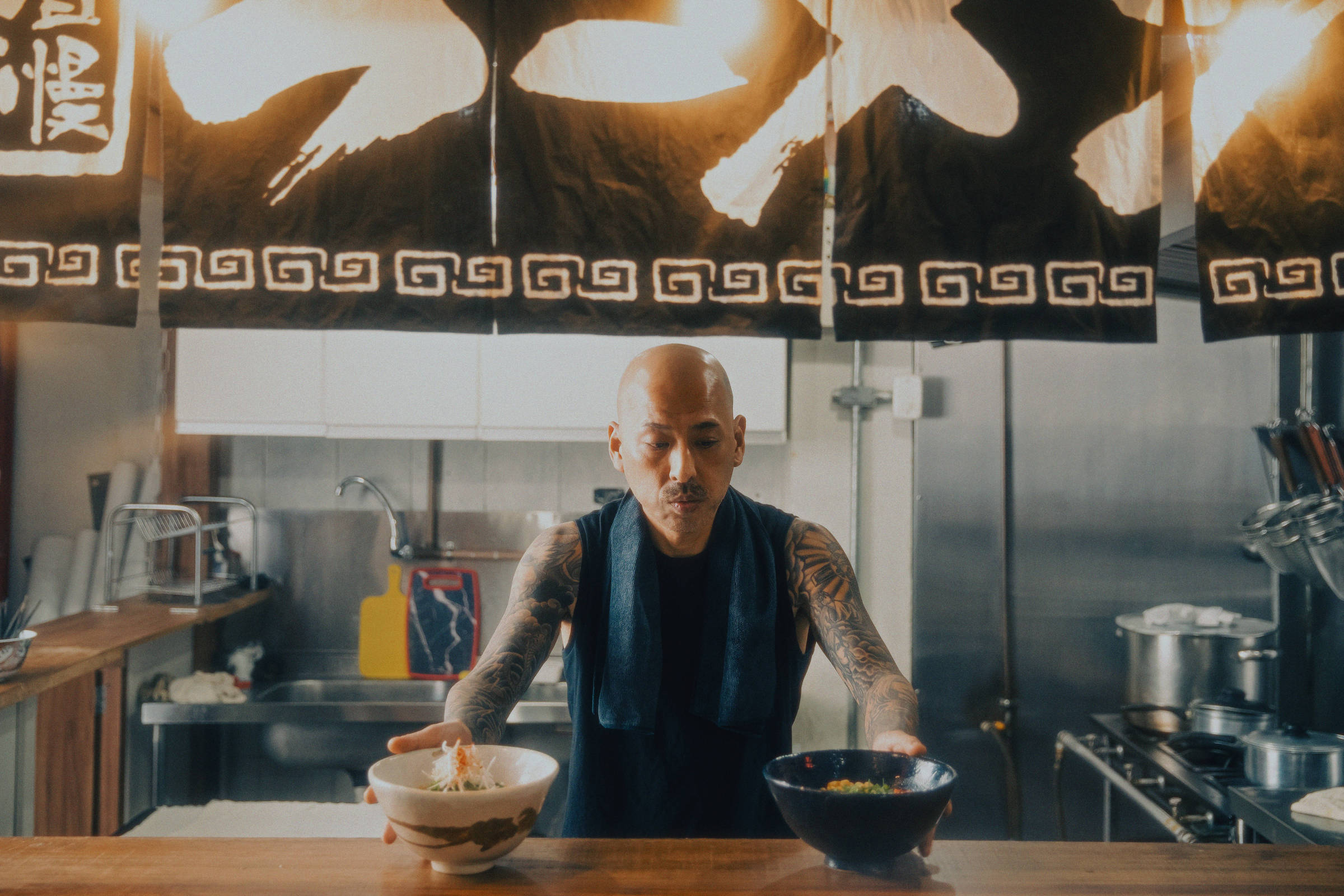 Meet Shindo Michihiko, a Japanese man who makes one of the most disputed ramen in SP by himself

In the Liberdade district, both in the galleries and in the traditional fair, no one wastes time. The custom when it comes to eating is to place your order quickly and receive it even faster, in a few minutes.

But not in Brazil Lamen. Run by Shindo Michihiko, the store, also called Shindo Lamen, serves one of the most popular Japanese noodle soups in São Paulo, at the back of a gallery on Rua Barão de Iguape.

The wooden cabin, with flashing lights and a black flag in which “ramen” is written in Japanese katakana syllabary, conveys the tranquil aura of the 50-year-old tattooed owner.

The Japanese from the city of Takasaki traveled to Brazil in 2009, when he tried ramen here for the first time — but he didn’t like what he tasted at all. “I thought it would be rewarding and fun to open a ramen shop here,” says Michihiko, who has been cooking since he was 18.

Shin, as he is commonly called, returned to the country in 2011, when he even tried to sell the recipe here, but the business did not go ahead. It was six years ago that he returned to Brazil and implemented his plan, after working in more than ten restaurants in Japan.

In the Asian country, before entering the world of gastronomy, he even worked in fashion and was the lead singer of a band. And he says he still has the idea of ​​making a union between fashion, music and ramen in Brazil in the future.

In the current address in Liberdade for three years, where anime toys and gorilla dolls decorate the space, Shin shares space with stores that sell ice cream, churros and fried foods. Always with a towel around his neck, he unfolds amid aluminum pans and steam from hot food. Alone.

He is the only one who cooks, serves, receives payment and, in the end, washes the dishes. “I do everything myself. I wouldn’t be able to control the restaurant without the numbered tickets,” he explains.

It works like this: there are 40 tickets distributed per day, in order of arrival. Whoever wins the number places the order and receives the ramen in the order of the queue. When the contents of the pot with the well-seasoned soup run out, the chef doesn’t serve anything else and interrupts the service — but the amount prepared takes care of the 40 customers. Also, he only accepts cash. No credit or debit cards, not even Pix.

The counter, with high stools for customers to sit on, is only open on Mondays, Fridays and Sundays for about three hours. On weekends, the doors are usually open at noon. On the other two days, at 6 pm. But it is on his Instagram profile that Shin, who barely speaks Portuguese, announces which dishes he will serve and confirms the other operating details.

From the pans, dishes like Curry Ramen usually come out, which goes with beef broth and curry sauce. There is also the noodles with miso sauce, a paste widely used in Japanese cuisine, and the one with shrimp. All cost $50.

Word of mouth and social media made the demand grow. Daniel Saito, 24, left work early on Friday (16), in Cotia, in Greater São Paulo, and went straight to Liberdade to arrive early at Brazil Lamen. “I came running, I thought it would end quickly”, he confessed, who took the number one password and got to know the place through his brother.

While the search for the 40 passwords is hectic, Shin says he doesn’t want to increase his clientele or expand his space. He says that he would only change his place if he went to something even more intimate, to serve up to ten people at most. And he has an explanation for that — the idea is that customers pay attention to what they’re eating.

“When eating ramen, I think it’s good to face it,” says the chef, who says he tries to offer more than a plate of noodle soup. As the fashion dictates, he defines the service as a gastronomic experience, in which everyone has time to notice the chives, which he uses up to the stalk, or the chickpeas, for example.

One of the best-selling dishes, by the way, is the vegan version of ramen. “Maybe a lot of people will stop eating meat in the future”, he justifies. In the recipe, the cook uses tapioca, a Brazilian and vegan ingredient that Shin says he found “kawaii”—or cute, in Portuguese. One of his dreams, he says, is to increase ramen production with local ingredients and Brazilian flavors.

In the meantime, the Japanese man continues in his wooden cabin steeped in tradition. He puts background music on his speaker, creates a mood in the gallery, prepares the next dish and rings the bell for the customer to come and get the steaming bowl.

Facebook
Twitter
Pinterest
WhatsApp
Previous article
Italy: What is the stance of the far-right alliance towards Vladimir Putin?
Next article
Orange: Partners for a secure platform