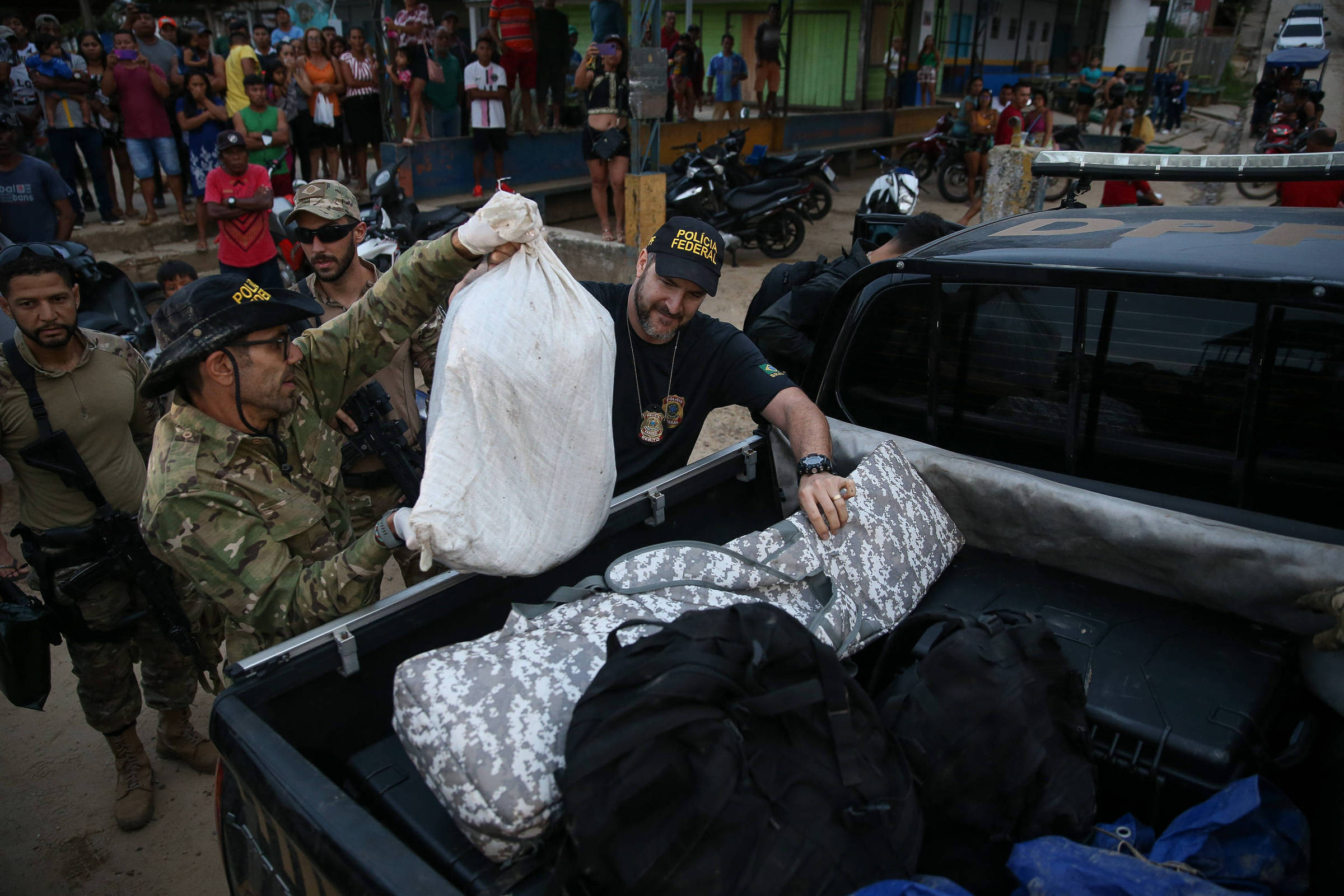 Amazonas is experiencing a crisis of violence associated with environmental crime

International drug trafficking route, bordering three countries and a territory larger than the Northeast region. With these geographical characteristics, Amazonas, in four years of Bolsonaro’s (PL) government, went from the status of the most preserved state in the Amazon to the epicenter of socio-environmental conflicts and one of the leaders in degradation and violence against traditional populations.

In 2022, the state administration is disputed by eight candidates, among which three have already commanded the state: the current governor Wilson Lima (União Brasil) and the former governors Amazonino Mendes (Citizenship) and Eduardo Braga (senator for the MDB). In government plans, the state’s environmental bottlenecks are ignored.

Violence is a part of the region’s problems and was exposed in the murders of indigenist Bruno Pereira and journalist Dom Phillips, killed for contradicting illegal fishing interests in Vale do Javari. The indigenous land is in the border region with Peru and Colombia, marked by the influence of cocaine trafficking and smuggling of natural resources.

“There is one thing that articulates all the problems: the pattern of development that has been predominant in the entire Amazon and in the state of Amazonas. A modernization that benefits from the exploitation of natural resources —wood, land, ore, water— and ignores knowledge the ways of life of the local populations”, evaluates Marcelo Serafico, sociologist and professor at Ufam (Federal University of Amazonas).

Amazonas jumped from fourth state in the Amazon deforestation ranking, in 2020, to second place in 2021, shows the RAD (Annual Deforestation Report) by MapBiomas. The process of felling trees follows the strengthening of the so-called Amacro, a new frontier for the expansion of agribusiness on the border of Amazonas, Acre and Rondônia.

According to MapBiomas, in three years, Amazonas appeared for the first time in front of Mato Grosso and Maranhão, thus reaching second place in the list of states that most deforest.

Cities like Humaitá, Lábrea and Apuí had high deforestation rates that boosted the state in the negative ranking. The three municipalities are located in the south of Amazonas, in the Amacro region, where the outbreak of fires in recent years is also worrying.

Of the ten municipalities with the highest number of fires accumulated between January and August this year, according to Inpe (National Institute for Space Research), four are in Amazonas: Apuí, Novo Aripuanã, Manicoré and Lábrea.

In 2022, although there is a 5% drop in the comparison between the period from January to August of this year with the same in 2021, the data remains high when the reference is the year before the inauguration of Bolsonaro and Lima.

Recently, a fire on 1,800 hectares (the equivalent of 11 Ibirapuera parks) in the Manicoré River region spread smoke as far as Manaus. Two months earlier, the governor had said, when visiting the area on campaign, that he would go “to the last consequences” to prevent the creation of an RDS (Sustainable Development Reserve) on the site.

Amazonas has also been leading the ranking of indigenous homicides for three years, according to a report by Cimi (Indigenist Missionary Council). In 2021, there were 38 murders.

The increase in crimes occurs in parallel with a weakening of the defense agencies of this population, highlights Gersem Baniwa, a doctor in indigenous social anthropology and professor at UnB (University of Brasília).

One of the biggest sources of pressure on native forest peoples is illegal mining, especially in the Yanomami Indigenous Land, which runs from Amazonas to Roraima — the largest demarcated territory in the country.

The Bolsonaro government, which has a project to release mining on indigenous land, boosted its defense of this agenda with the Ukrainian War and the fertilizer crisis.

The solution proposed in the National Fertilizer Plan is to allow the exploitation of potash — and one of the largest deposits in the world is in the municipality of Autazes (AM). The exploration of the ore, which even received authorization from the state agency Ipaam (Amazonas Environmental Protection Institute), is questioned by the MPF (Federal Public Ministry) for not having previously consulted the peoples who will be impacted.

The advance of mining in the state of Amazonas was also evident in November last year, when a group of illegal miners defied state security forces and set up a kind of floating city for the exploration of gold. In that period, hundreds of ferries and dredgers were installed on the Madeira River, 112 km from Manaus.

The scene was nothing new in Madeira, which has been degraded by illegal mining for decades. However, an action of such proportions had never been recorded so close to the capital, which concentrates the forces of state repression.

“[Os ribeirinhos] find an occupation [no garimpo ilegal]do not improve their living conditions, are exposed to violence and still participate in something they did not participate in, which is the degradation of the environment due to a complete lack of perspective”, concludes Serafico.