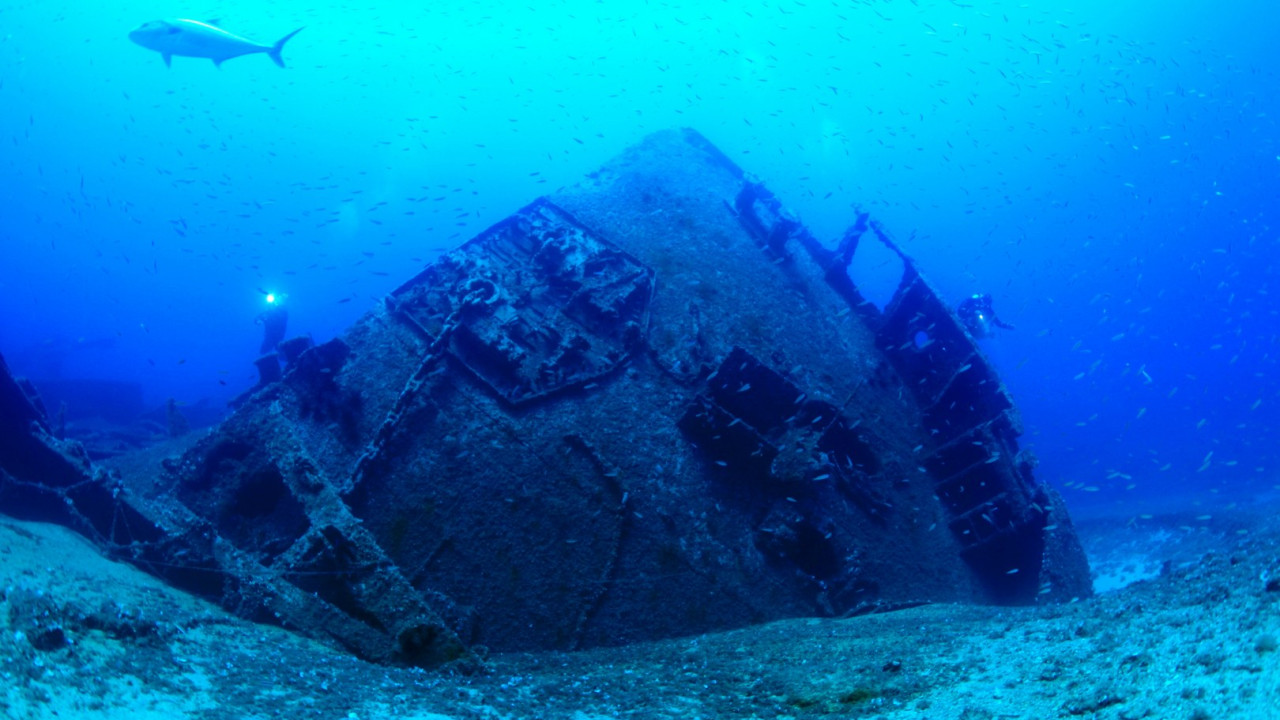 “African Marquis”: See video and photos of the priceless shipwreck “hosted” at the bottom of the Aegean

This is an extremely rare “Canadian Liberty”, lying in the waters of the rocky island of Plati, in the south-western Dodecanese, since 1958

The investigation shed light on one of the most important shipwrecks “hosted” at the bottom of the Aegean, as the “African Marquis” (AFRICAN MARQUIS), an extremely rare “Canadian liberty”, lying in the waters of the rocky island of Plati, in the southwestern Dodecanese, since 1958.

As the researcher notes in APE – MEP Kostas Thoktaridis, is a priceless wreck as none of the 356 ships of this type built in Canada during the war now survive. “The Liberty, Canadian or American, essentially decided the outcome of the battle for the supply of Great Britain by sea,” he adds.

If one were to grasp the thread of history, one would begin with the fact that the heavy losses of merchant ships caused by German U-boats had turned the tide on the side of the Axis, jeopardizing the outcome of the Battle of the Atlantic. So the British government proceeded in 1940 to build cargo ships of a type based on the pre-war “North Sands” design. This was chosen as it was simple, economical and at the same time with a large transport capacity allowing the transport of 10,000 tons of cargo. Using the “North Sands” shipbuilding design, 204 merchant ships were built in Canada for the British Ministry of War Transport, which were given names with the prefix “Fort”, as well as 21 fleet auxiliaries. An additional 135 ships of the same type were built on behalf of the Canadian government and were given names with the prefix “Park”.

The “North Sands” design was then used by the US in a more refined form for the needs of their own shipbuilding program. A total of 2,710 EC2-S-C1 type ships were completed and became known as Liberty. Visually, their main differentiation was in the layout of their commode which was in a single structure, while on the Canadian and Ocean ships an additional hold separated the bridge from the rest of the commode.

Of the Canadian-built ships of the Fort and Park type, thirty-one were lost from war causes and four more in maritime accidents. After the end of the war the “on loan” ships were returned by Britain to the USA and Canada and sold to private shipowners in order to make up for some of the losses they had suffered in the six years of the war. About fifty-four of the Forts and about seventy of the Parks gradually came to Greek shipowners and became known as “Canadian liberties”. Shipyards such as those of Rethymno & Koulokundi, Lyra, Laimos, Goulandris, Patera and Lyra acquired several of the Canadian ships, successfully recognizing their potential for profitable exploitation. The AFRICAN MARQUIS is the only one that sank in Greek territory.

AFRICAN MARQUIS was built in 1943 in Vancouver as FORT GLENORA. The 134.1 x 17.4 meter vessel had a riveted hull and three coal-fired boilers. As FORT GLENORA she participated during the war in fifty-four convoys. In June 1943 she made her first transatlantic crossing, from New York to Liverpool and from there to Gibraltar and Port Said. It continued to take part in convoys between Britain, the Mediterranean, north Africa and the east coast of the US, until the end of World War II when it found itself in India.

In 1950 it was sold and became NGKyriakides Shipping Co. Ltd. based in London and renamed GEORGE K. Before starting her voyages the vessel was sent to the shipyards where she was converted to burn oil in her boilers. In 1956 the vessel flew the Liberian flag following its sale to Italian interests West Africa Navigation Ltd. and renamed AFRICAN MARQUIS. On February 25, 1958, it sank in the islet of Plati, while transporting ore from Morphou, Cyprus to Hamburg. The next day the ship broke in two and sank, so it was abandoned as a presumed construction loss.

Its precious cargo was lifted by the shipwreck company of the Xiradakis brothers. Two divers who participated in the work were the brothers Theofilos and Nikitas Klimis, a dynamic duo who had to their credit the recovery of dozens of wrecks. He would mention that the bunkers were 20-22 meters deep and that it was necessary to cut sections that prevented the lifting of the copper load, which was then transferred to the Wells of Karpathos.

At the bottom of the Aegean

“The 134-meter-long submerged AFRICAN MARQUIS emerges from a depth of 32 meters, impressing the diver with its volume. Looking closely one will find that the plates are riveted to the hull. The bow is awe-inspiring as it rests with a graceful slope on the bottom, while the anchor chain hangs on the deck” says Kostas Thoktaridis who, in addition to being the head of the Planet Blue research group, carried out the historical and archival research together with Aris Bilalis.

“A large part of the hull has fallen to the bottom and between the bow and the dresser are scattered sheet metal, and pipes from the former steam network. The stern of the wreck is inverted with the deck touching the bottom. The propeller is not in their place since its high value made it one of the first targets of the elevators” he adds. As for the sight, it can leave the visitor anything but indifferent: “The area of ​​the wreck is teeming with marine life, offering the diver a rare diving experience with underwater visibility exceeding thirty meters.”