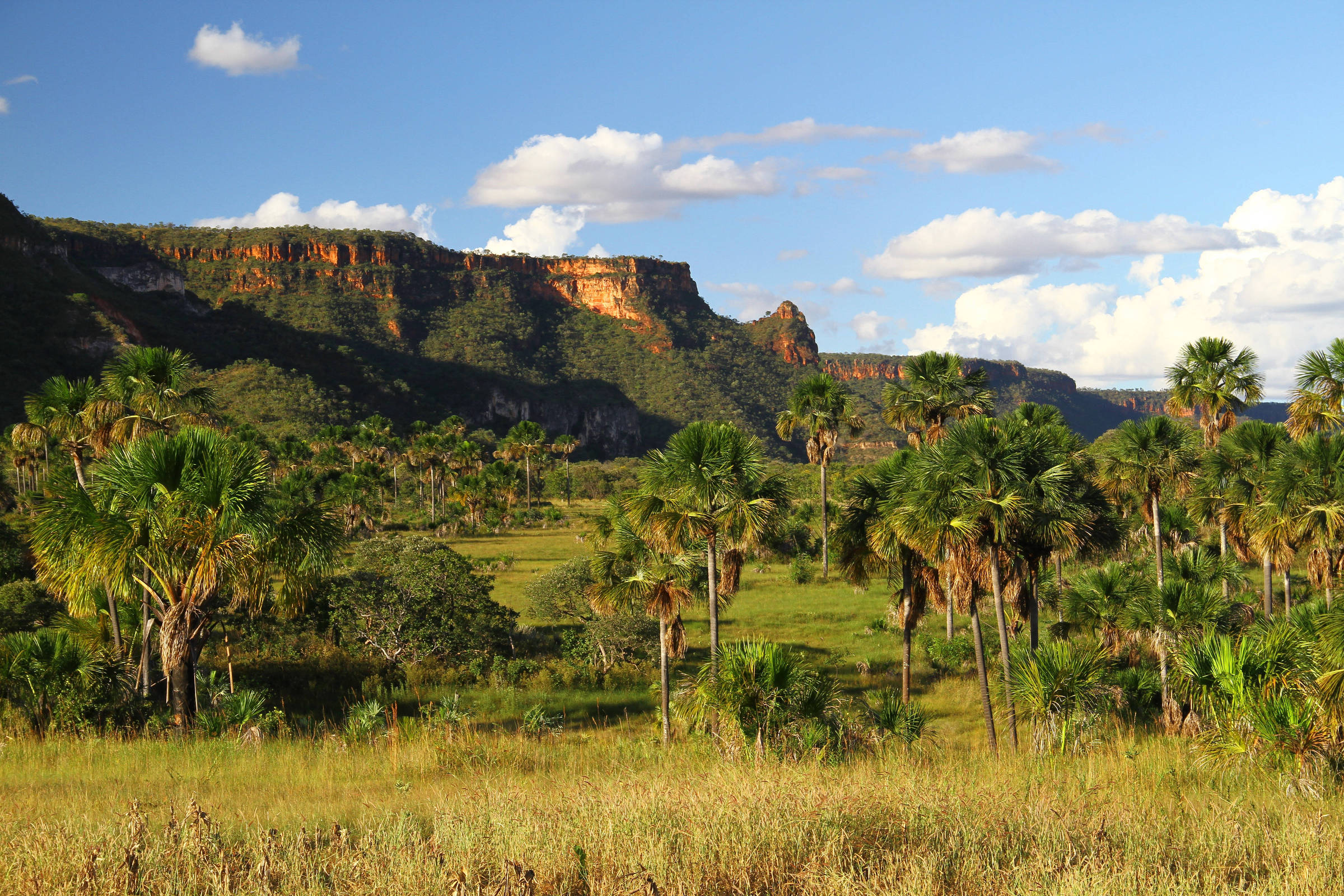 The first crystal deposit discovered in 1912 in the village of São Jorge was certainly not the only wealth found in the region today called Chapada dos Veadeiros National Park.

This is because the area —created in 1961 by the then President of the Republic, Juscelino Kubitschek, with the name of Tocantins National Park— has much more than the good vibes of the many crystals that are still there.

Namely: a cerrado that mixes green and reddish landscapes of plateaus and rock formations, canyons, rivers with crystalline waters, and an immensity of waterfalls and caves that have not even been visited or discovered until today.

Located in the northwest region of the state of Goiás, about 240 km from Brasília, the park has been recognized as a World Natural Heritage Site by UNESCO (United Nations Educational, Scientific and Cultural Organization) since 2000.

Among the species of fauna that inhabit the area, about 50 are classified as rare, endemic or at risk of extinction in the area.

Since its last expansion, in 2017 —whose objective was the development of scientific research, environmental education and controlled public visitation—, the park has 240 thousand hectares, and has been reopening old attractions for visitation and discovering new ones.

Alto Paraíso de Goiás, one of the five cities that comprise the Park, is considered the gateway to Chapada. This is where the São Bartolomeu River and a new attraction called Caldeira are located, reopened last July.

There, four bathing wells are formed in curious layers of rocks that gradually become subvertical as one advances to the last waterfall, with its waters falling into a snail-shaped rock.

To get to the place, it is necessary to face a trail of about four kilometers and five crossings inside the river. The reward is lush landscapes that are so unique that they leave doubts as to whether the formations are works of nature or extraterrestrial interventions.

Speaking of aliens, it is important to mention the fame of Terra Ronca and the natural works of its caves, in the city of São Domingos – they say that the place is the atrium to another planet.

You can imagine that the belief comes from the sounds and the inexpressible experience of walking for hours through caves with giant halls decorated with speleothems, the rock formations that take place inside.

There are approximately 300 caves and caves — the Angélica cave is among the most beautiful and largest in Brazil. Its complete crossing is 14 kilometers long, including an overnight stay in its interior, following the course of the river.

For those who want a more subtle dose of adventure, it is possible to visit the main halls, where surreal scenarios welcome visitors right away.

With 25 kilometers in length, a new crossing on foot is in the city of Cavalcante and connects the village of São Jorge, in Alto Paraíso de Goiás, to the village of Capela.

It is well signposted and can be covered in one or two days, crossing rivers and typical landscapes of the Cerrado. The overnight stay takes place at the newly opened Boa Sorte campsite, or at the Sete Quedas campsite. The implementation took about two years, and it opened last September.

The Tocantinzinho River rafting expedition already had a nine-kilometer route with a sequence of rapids from levels 1 to 3 — now, it has gained a new route in a route that lasts all day.

It is 23 kilometers long, with rowing along the course of the river, where tourists find surprises and stops, crystal clear waters, and stretches where the rocky walls of the canyons taper in such a way that it is necessary to get off the boat to fulfill what is missing. swim.

According to Guilherme Predebon, canoeing guide and founder of Veadeiros Rafting, it took several months of work on the route to ensure the safety of the adventurers.

In the vicinity of the São Jorge district, Ion David, canyoneer and owner of Travessia Ecoturismo in Veadeiros, developed a stretch authorized by ICMBio (Chico Mendes Institute for Biodiversity Conservation) to practice canyoning between the rapids and the Garimpão waterfall.

Interested people travel vertically or horizontally along water courses, with the aim of passing through different obstacles such as rapids, waterfalls and wells.

“There are six rappels and a jump through the beautiful stretch known as Carrousel”, says David. “Before starting, we equipped the entire group and carried out individual training with each participant. The stretch offers rewards and access to places that are very different from others in the National Park. It’s really amazing.”

Brasília airport is the closest way to get to Veadeiros from other states. From the federal capital, it is 240 km to the base cities of Alto Paraíso de Goiás or its district of São Jorge.

To go around them by car, you can rent one at the airport for a daily rate from R$120, or hire a transfer with a local tourist agency in Alto Paraíso from R$400 each way (depending on the type and size). of the vehicle).

By bus there are several companies, the best known being Viação Real Expresso — a four-hour journey, with a cost from R$ 78.

The city offers varied accommodation options, from budget to luxury. Inspired by the high demand for glamping-style cabins (domes and sustainable homes in the middle of the savanna), rental sites like Airbnb offer squatters in this style.

There are “tents” that range from the most minimalist to some with hot tubs and a living area and pool.

The inns are focused on rest and “good energies”. Casa da Lua, with an average daily rate of R$ 700 per accommodation, has a large garden with crystals, swings, hammocks, yoga in the late afternoon, fire pit and massage.

Meals are prepared with organic foods and there are vegan options on the menu.

The João de Barro camping has already assembled cabins for those who do not have tents, with prices starting at R$ 160 per day.

Nenzinha has been serving for over 20 years in the backyard of her house, in the village of São Jorge, some of the dishes from Goiás. There, and in nearby restaurants, you can eat recipes based on buriti, pequi and baru, as well as corn pamonha and the Goiás empadão.