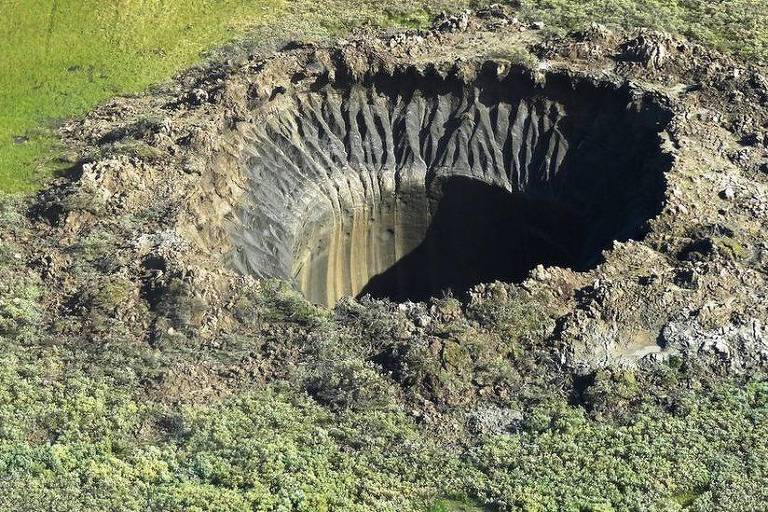 Fish that lose their sense of smell and reptiles that change sex: the strangest effects of global warming

Birdsong, flowers blooming and mosquito bites are not things you associate with the month of November in the north of England. But they are some of the milder side effects of global warming.

In addition to causing deadly floods and droughts, rising temperatures are cited as responsible for spontaneous explosions in Siberian permafrost, mustard shortages and the darkening of the planet.

Many of the impacts of climate change are devastating — and some are a bit strange.

Some Russian scientists attribute the appearance of giant craters in the melting of Siberian permafrost —the layer of frozen earth— to rising soil temperatures, which cause underground pockets of gas to spontaneously explode.

This is just one hypothesis to explain the formation of giant craters in the Arctic landscape.

As a BBC Future article highlighted, they are an “unsettling sign” that this cold and largely unpopulated northern landscape is undergoing some radical changes.

Recent research has also shown that the Arctic is warming even faster than previously thought — four times faster than the rest of the world.

And as well as poking holes in Earth, climate change could also be dimming the planet’s “glow,” according to scientists at the Big Bear Solar Observatory in New Jersey.

By measuring sunlight reflected from Earth onto the dark part of the Moon at night, scientists measure what they call “Earth brightness” or albedo—basically the Earth’s ability to reflect.

Studies suggest that the amount of low cloud over the eastern Pacific Ocean is decreasing due to rising ocean temperatures.

Since these clouds act like a mirror, reflecting sunlight back into space, without them, this reflection diminishes. So, according to these scientists, we might actually be taking the shine off our planet.

While we may be causing global warming, we’re not the only species that has to deal with it. Some creatures are affected in really surprising ways.

In some reptiles, the sex of the offspring is partially determined by the temperature at which the eggs are incubated. For example, genetically male bearded dragons — a species of lizard found in Australia — change from male to female when incubated at a certain temperature.

So scientists are concerned that males could become increasingly rare as the world warms — putting the species at risk of extinction.

In the ocean, rising levels of carbon dioxide, a greenhouse gas, may be causing fish to lose their sense of smell.

Climate change is also measurably altering seasonal synchrony. In the UK’s most scientifically studied forest of Wytham Wood, baby great tits, a colorful bird common across Europe and Asia, hatched up to three weeks earlier than they would have in the 1940s.

The entire spring food chain has changed with warming — the caterpillars that birds eat, the oak leaves that caterpillars eat — all reach their peak weeks earlier than they used to before we warmed up the world.

As the seasons change, many birds adapt — or simply move. This year, baby bee-eaters were born in a quarry in Norfolk—they are commonly found in the southern Mediterranean and North Africa.

Even the soundscape is changing. London is now the scene of unseasonably birdsong. One study even suggested that forest birds were climbing higher in trees to sing, possibly to prevent their songs from being drowned out by early foliage.

Extreme weather is also making it difficult to grow food. Basic commodities such as wheat, corn and coffee are already being affected. And this year there was a notable shortage of condiments.

In April, Huy Fong Foods, a California-based company that makes about 20 million bottles of sriracha hot sauce each year, sent a letter to customers warning of a “severe shortage” of hot peppers.

In the summer, supermarkets in France began to run out of Dijon mustard — a problem that can be attributed to bad weather on the Canadian prairies, where most of the world’s mustard seeds are grown.

And the reality of climate change is hampering even efforts to eliminate carbon. In August, the energy company EDF had to reduce the output of nuclear power plants in France, because there was not enough cold water in French rivers.

The answer — which is now being discussed by 200 countries at the UN climate summit, COP 27 — is a dramatic reduction in planet-warming gases.

But we’ve already transformed our world by heating it—and there are likely to be many more surprising and unexpected consequences.