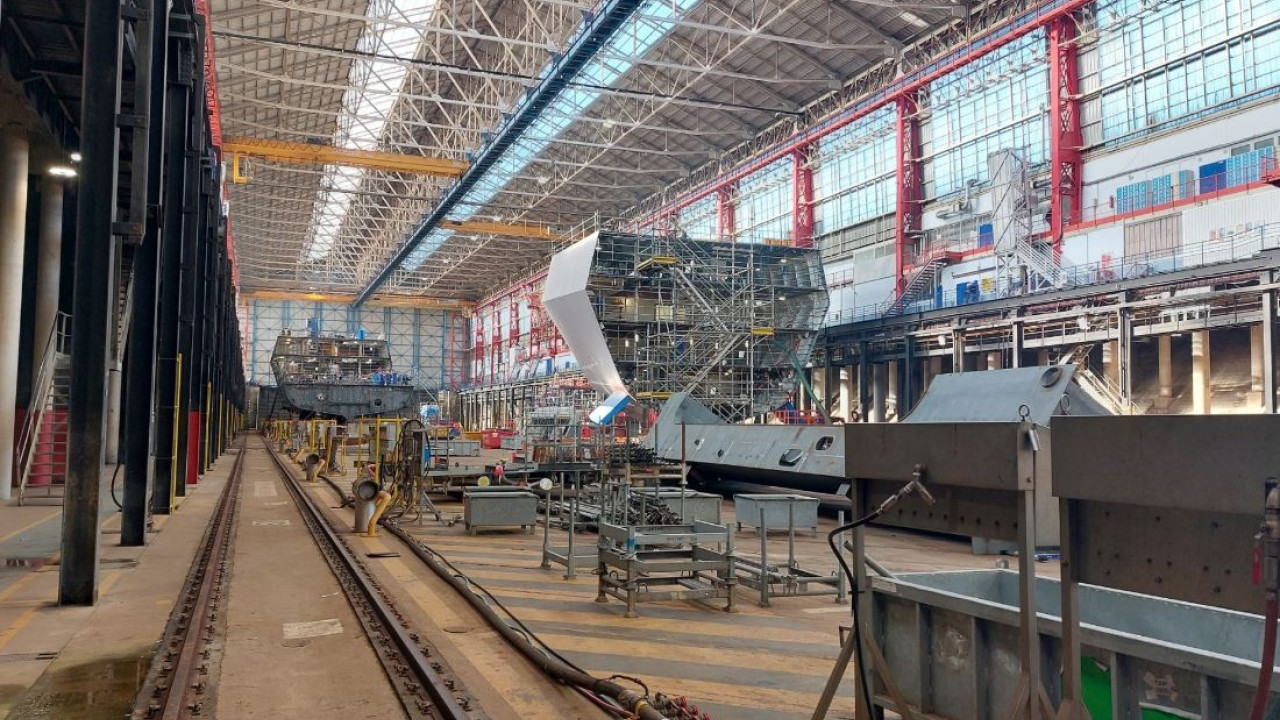 As announced, five pre-rigged sections of the first Greek “Kimon” class frigate were placed on the longitudinal, with the first two sections already welded together

Significant progress in the construction of the first Greek FDI frigate “Belharra” of the Kimon class was achieved seven weeks after the placement of the first block of the frigate in the tank at Naval Group shipyards in Lorient, France. As announced, five pre-equipped sectors of the first Greek class frigate “Kimon”were placed longitudinally, with the first two sectors already welded together.

[#NAVGREEK] ⚓🇬🇷 7️⃣ weeks after the entry of the 1️⃣st block of the first FDI HN in the dry dock, 5️⃣ pre-outfitted blocks of the very First of Class frigate Kimon are laid on the keel line, and the 2️⃣ first blocks have been welded together! pic.twitter.com/3czDDXI6xS

It also became known that the diesel engines, reducers and power pairs have already been delivered to Lorient and their installation on the ship will begin before the end of the year. “The program continues to progress as planned, with many milestones achieved in recent weeks. We are proud of the efficient work carried out by the teams in Lorient, which will allow us to deliver the ship in 2025,” said Gilles Langlois, director of the FDI frigate program, among others.

[#NAVGREEK] ⚓🇬🇷 Live from our Lorient construction site! Snapshot of the dynamometer installation and operation. We are pleased to call on the 🇬🇷 company CROSS TECHNICAL SERVICES for this mission. pic.twitter.com/ZBM4PmL0Yb

FDI “Belharra” is a multi-role combat frigate. It has high-level capabilities against ships, against aerial threats, anti-submarine operations as well as projection of special forces. Her protection against air and surface threats is ensured by the most modern sensors, including Thales Sea Fire, the first multi-function multi-digital radar with four fixed antenna arrays.

Naval Group’s teams are working hard to ensure continuous progress as planned and to achieve the new step. The diesel engines, the gearboxes and the diesel generators have already been delivered in Lorient, while their embarkation on board will start before the end of the year. pic.twitter.com/pUxBEXKKRy

The FDI is equipped with a built-in web that brings together all airborne sensors, enabling permanent 360-degree surveillance. It has a displacement of 4,500 tons, a length of 122 meters, a width of 18 meters and a maximum speed of 27 knots. It can accommodate a 10-ton helicopter and an unmanned aerial vehicle (UAV).