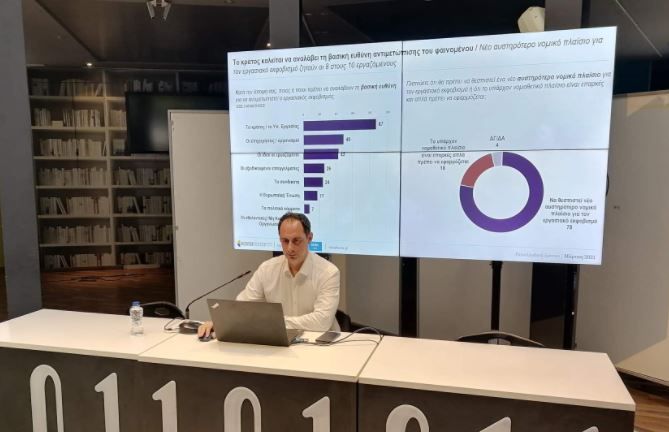 Market in Skai.gr: Greece is the only European country that has ratified by law the directive on combating violence and harassment at work |

Workplace bullying is not a new phenomenon.

Mobbing, violence and harassment at work – as it is otherwise called work bullying – is fueled by crises, outside or inside the company / organization, manifested by repeated acts that can worsen the working conditions of the target person, and threaten his professional development, to infringe on his rights and dignity, to deteriorate his physical or mental health.

In a survey conducted on the phenomenon, 85% of respondents believe that workplace bullying is so widespread in our country that it is a serious social problem.

The research was done on her behalf MRK Consulting specializing in Preventing and Managing Violence and Harassment at Work Bullying, Stress, Burnout and Ioannis Marketos, by Kappa Research

Mr. Marketos spoke to on the occasion of the latest legislative initiatives of the Minister of Labor Kostis Hatzidakis.

Mr. Marketo, 3 months have passed since the law of 4808/2021 was passed, which ratifies the ILO directive 190, where are the Greek companies today?

ΑΠ: First of all, I want to emphasize that Greece is currently one of the few countries that have ratified Directive 190 of the International Labor Organization and is in fact the only European one. In fact, today Greece is a pioneer because it shows that it understands that violence and harassment in the workplace is one of the deepest social problems, as 85% of employees have stated in the relevant survey. A phenomenon whose consequences go beyond the work environment and extend to the family, physical and mental health, society.

The spirit of C 190 that was ratified through law 4808/2021 for dealing with violence and harassment in the world of work concerns everyone. It was created to protect both employees and companies. It prevents gender-based violence, and creates an additional network of protection for those who have suffered domestic violence, expands the categories of employees, including categories such as trainees, etc., and organizes companies to protect their ecosystem.
To date, however, both Greek companies and those operating in Greece, for the most part, have not yet harmonized with the new law. The reasons are different in each case. The most basic are the lack of in-depth knowledge of the subject, the lack of know-how in the operation of the framework and the understanding of the need for immediate harmonization.

So what do companies need to do in order to harmonize?

ΑΠ: The first thing companies need to do is understand that harmonization with the law is not just a Legal Compliance. It is essentially an Administrative Reform. Specific persons are now appointed who are responsible for the obligations arising from C190 of law 4808/2021 at a very high hierarchical level who are called to manage the process. To organize, manage and train the employees but especially the organization itself. It is clear, as described in the articles of the law, that both companies and employees have not only rights but also obligations that they must comply with.

What are the key elements that a company should pay attention to during its harmonization?

ΑΠ:The key points that a company should pay attention to when harmonizing it are the Training of Policies and Procedures, the Care Mechanism and the Training. The Training of Policies makes clear to everyone the intolerance of the company to phenomena and harassment. Policies support methods of prevention and avoidance. They clarify which obligations the employees have and which the company. Describe the penalties in case of violations, convey with examples in understandable language cases of violence and harassment.

The Custody Mechanism is perhaps the most crucial process of harmonization and must follow a specific methodology. To operate, for example, on the basis of reports and complaints which can be made 24 hours a day, with a specific procedure, with historicity, with confidentiality, with a simultaneous process of protection of the complainants as well as other procedures. Any complaint of violence and harassment in the workplace is significant. Violence and harassment do not only have serious consequences for the employee. The negative effects weigh on the company or organization in which some of them are manifested, which are social (reputation), financial (profitability), legal (complaints). Finally, in order for the Supervision Mechanism to function properly, it must include procedures and actions that will aim at the effective restoration of the working environment.
Education, on the other hand, is the largest prevention mechanism an organization could invest in. By training virtually every company
informs their employees about what violence and harassment is in the world of work, through different mechanisms but also examples, how it manifests itself, how it is treated, what procedure is followed in case someone has been targeted. Above all, however, he emphasizes the company’s policy of intolerance to such phenomena.

Has the #mettoo movement changed anything about incidents of violence and harassment at work?

ΑΠ:The #metoo movement, like any action and information action to avoid and reduce cases of violence and harassment in the world of work, gender-based violence and all forms of violence, is in the right direction. Today, however, we have something more, a stronger role of SEPE, and a specific regulatory framework. At the same time, you strengthen the role of the occupational physician. In other words, there are now valuable tools for dealing with violence and harassment, as highlighted by the 1st Panhellenic Survey conducted by MRK Consulting with the help of Kappa research in March 2021.

Of course, violence and harassment in the workplace has many forms, insidious, that hit the target in an opaque and invisible way. Forms that the employee himself must learn to recognize in order to be able to manage them. In order not only to protect his job position, but also his family and social balance, his physical and mental health. Forms of bullying that are not part of verbal violence or sexual harassment and abuse, such as spreading rumors or isolation at work, passive violence.

What could an employee do to avoid and manage the effects of workplace bullying?

ΑΠ:The first thing to know is that there is a solution. It is also important to understand and comprehend that he has not provoked with his / her actions to be targeted. He may have been targeted for gender, race, economic or social status, age, appearance. He / she may have been targeted for his / her abilities, for the skills he / she possesses, for his / her popularity, for his / her future progress. The motivation is different each time. After all, in workplace bullying there are no “victims” but “targets”. Workplace bullying, violence and harassment in the world of work is deceitful, it lasts, it escalates and it starts from scratch. Violence and harassment is exercised on categories of workers who until yesterday were not in the spotlight like the older ones.

Violence and Harassment is also perpetrated by clients against employees. The second thing I would suggest is whoever is targeted to talk about what they are experiencing. But what he has to pay attention to is who he will talk to. Dealing with violence and harassment in the workplace is not solved by company conversations. Those who have been targeted need to be encouraged to talk about what they are experiencing but to those who have the experience and know the subject in depth. The purpose and goal is not only to listen to them but to help solve the problem. It is either inside or outside the work environment. The first – but first choice is not to hesitate to point out to anyone who engages in bullying, bullying behavior.

What are the characteristics of a bully in the world of work?

ΑΠ: Except for those who suffer from psychopathy and instead of having psychopathic behavior in the underworld manifest it in companies where everyone else works may be people next door. The fear of losing their “officers” in the present or in the future, is a key motivation to engage in workplace bullying. If they feel, as an indication, that their Position, their salary, their popularity or their dominance will be shaken then sometimes reflexively, some others deliberately use violence and harassment. The fear of loss, combined with the feeling that they will never be caught, but that even if they are caught there will be no punishment is a strong combination of intimidation, violence and harassment.

After all, is there a solution to job bullying?

ΑΠ: As I said earlier, yes there is a solution. Due to the specificity of the phenomenon, because everyone works differently, as well as their work environment is different, their hierarchical position, their economic, family and social status each time the solution is different. The same goes for their companies organizations. There is no common harmonization methodology. Other process has to be followed by one shipping company, another bank, another small and medium business.

I would like to emphasize that the basic stage of resolving the phenomena of work bullying is independent of the object of occupation (public, private, free profession) in order to be able to deal with, manage and avoid work bullying in the workplace, one must has realized that he has become a target of workplace bullying. Recognizing the problem and putting it in the right dimension you can solve it either alone or with the help of experts.
At the same time to banish fear from within you. By banishing fear from within you, thinking that if you react to violence and harassment you will lose your job, you are essentially banishing the seed that the one who has targeted you is putting inside you. Because it is precisely the goal of those who engage in bullying, violence and harassment. Either you get fired, or you leave alone.

Facebook
Twitter
Pinterest
WhatsApp
Previous article
Gaga from Larissa: Let’s proceed with the vaccination so that we are all safe |
Next article
Digital breast tomosynthesis: an advanced technique