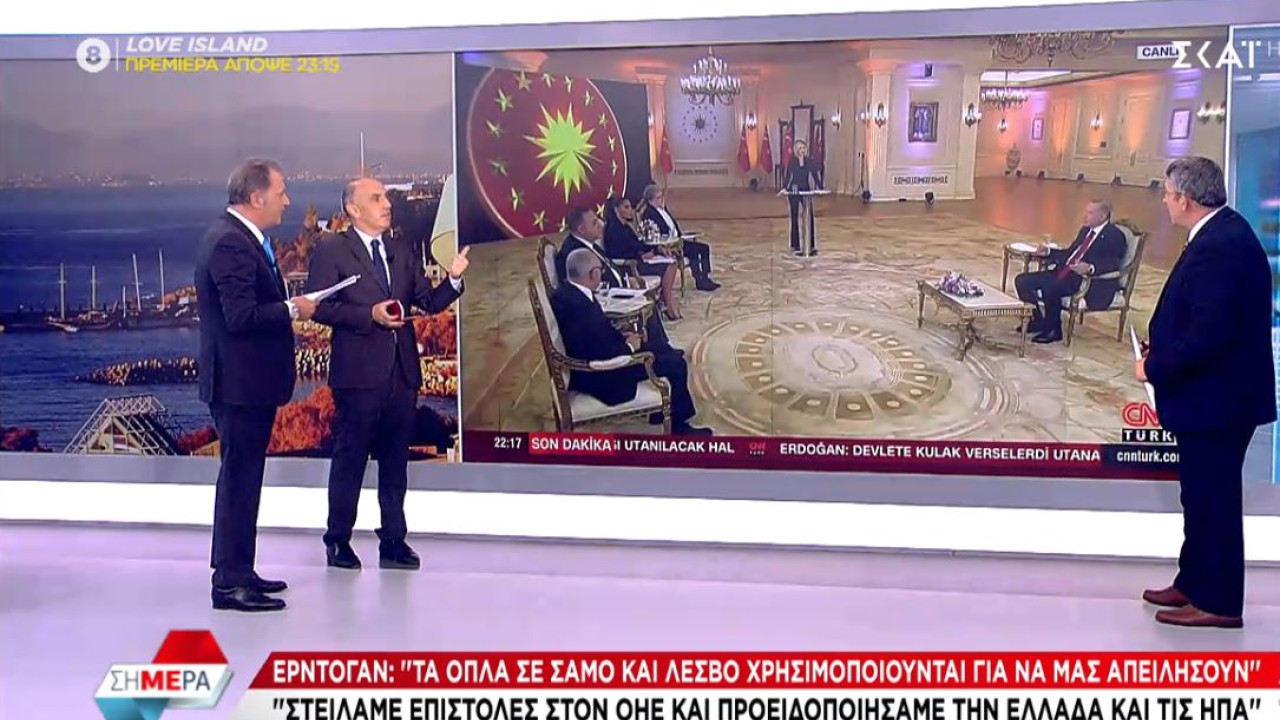 Erdoğan’s obsession with the islands: We have warned them not to say that we did not inform them

“We sent letters” he said “to the UN and warned Greece and the US about these moves, so that they don’t tell us that we didn’t warn them”, reported SKAI’s correspondent in Istanbul, Manolis Kostidis.

The Turkish president, Recep Tayyip Erdogan, repeated yesterday the well-known Turkish positions regarding Greek threats against Turkey through the islands, in his interview with CNN Turk.

There he repeated that “weapons in Samos and Lesbos are being used to threaten us”.

“We sent letters,” he said, “to the UN and warned Greece and the US about these moves, so that they don’t tell us that we didn’t warn them,” as reported by the SKAI correspondent in Istanbul. Manolis Kostidis.

Asked by Hurriyet newspaper director Ahmet Hakan what he will do since Greece “doesn’t listen” to the harsh messages he sends, Erdogan replied: “The US sends so many weapons, weapons systems and vehicles to these islands, and to Samos and in Lesbos. This is something we cannot accept. All of these were detected by drones. Not only have we detected it, but American armored vehicles are being used to threaten us.”

And he added: “We gave the necessary warnings to both the USA and Greece through the Ministry of Foreign Affairs. We also sent our last letter on September 17 to the UN. To inform them so that later they don’t tell us ‘you didn’t inform us'”.

“The islands must be demilitarized”

Continuing, he said: “These places should be demilitarized. Greece ignores this issue and avoids meeting. Here, we see that they have closed the international court road. If you are in favor of international law, why do you avoid meeting?

» These islands must be demilitarized. According to Lausanne, these parties are subject to special status. There are a total of 9 American bases in Greece. Our expectation from the US is not to lead Greece into wrong calculations and not to manipulate international public opinion.”

The Turkish president expressed his displeasure at his removal arms embargo in Cyprus. In fact, he said “we will answer them. We already have 40,000 soldiers and we will do more.”

Meanwhile, in the Turkish media they are discussing naval blockade scenarios of the Greek islands.

Military analyst Mete Jarrar commented: “They’re not giving us the F-16s, they’re giving them the Block-70 F-16s. They excluded us from the F-35 program, now they are giving them F-35s. When embargoing, he went and installed 1,000 tanks there. They had no money and they gave them $14 billion worth of weapons systems.”