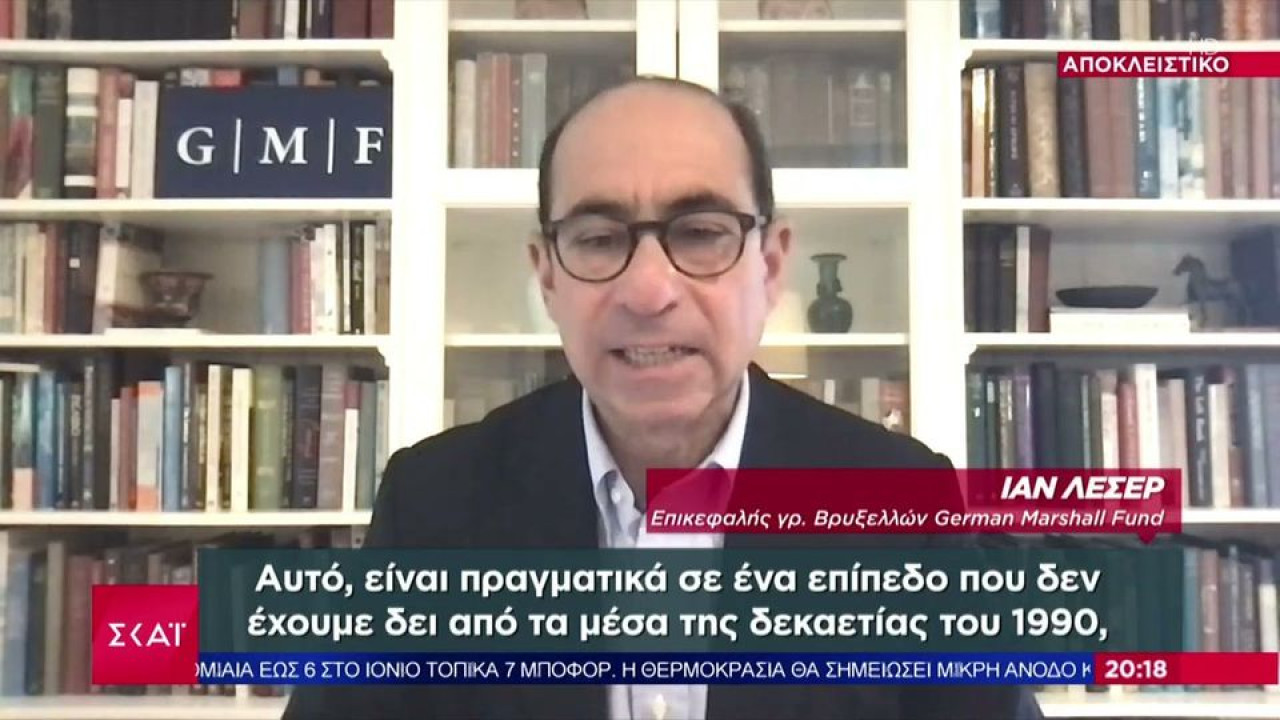 Ian Lesser on SKAI: The possibility of an accident between Greece and Turkey is not ruled out

The head of the German Marshall Fund in Brussels emphasized that since the mid-90s, Turkey has raised the thermometer so much with Greece

Analysts with great experience and prestige have fully understood the game that the Turkish president is playing Recep Tayyip Erdogan.

Speaking to and to Maria Tsilinikou o Ian Lesserhead of the German Marshall Fund in Brussels, did not rule out the possibility of an accident stressing that since the mid-90s Turkey has raised the thermometer so much with Greece.

Maria Tsilinikou: Lately, Erdogan and other Turkish officials have mounted a crescendo of provocations against Greece. Among other things, he has said that he will come one night, that Greece is a threat mechanism as well as that it is a puppet of NATO. How do you see the current verbal attack developing?

Ian Lesser: This is really at a level that dwe haven’t seen it since the mid-1990s, I would say. And it is quite dangerous. I don’t think either country is looking for conflict. But the more he insists on this rhetoric, there really is, you know, one very significant possibility of accidents occurring. I think maybe he sees some of that as leverage on issues that he would like to see progress on, whether it’s Washington or Brussels. But of course, it doesn’t have that effect. If anything, I think it’s much more difficult for Turkey and Washington, for Turkey and Brussels to really resolve the outstanding issues there.

Maria Tsilinikou: At a time when Turkey is putting forward the so-called Aegean army opposite the Greek islands and with casus belli in force in the event that Greece applies the international law of the sea, Turkey is demanding the demilitarization of the islands. How do you judge it?

Ian Lesser: I think he wants to be taken seriously on the international stage. I think he wants it for the country. But perhaps most of all, he wants it for his own political presence. And we go back to the domestic political motivations for him to be tough on these issues, because this is not just an issue for his constituents, but really, frankly, almost everywhere across the political spectrum in Turkey, this kind of resonates.

Maria Tsilinikou: EU and USA have taken a clear position in favor of it of undisputed Greek sovereignty . Despite this, he continues to attack both Greece and the USA and the EU. Do you think that there can be something and come together?

Ian Lesser: It is absolutely true that President Erdogan has also been very critical of NATO and NATO allies at the same time. I think this also takes place at a time when Turkish relationship with western partners is really at a very low level. I think it comes down to his own political style. I mean, he tends to personalize these things. And in that respect, I think, you know, it tends to project that very aggressive rhetoric. But could it lead to something more, you know, operationally aggressive? Absolutely.

Facebook
Twitter
Pinterest
WhatsApp
Previous article
Shock in Pelion: He threatened to burn his mother if she didn’t give him money
Next article
China launches C919 national plane to fight Boeing and Airbus; see photos